Ray McDonald, the summit lock keeper, had advised us to allow 1.5 hours to cruise from Chadderton to Failsworth Top Lock, rather than to one hour suggested by Nicholson. Thus far his advice had proved to be very accurate so we were up by 6.30am and on the move by 7.00am. 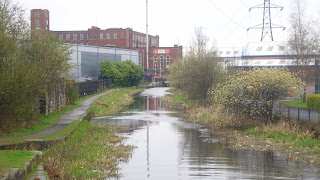 Chadderton really does represent a threshold on the Rochdale Canal. All yesterdays greenery gives way and the Rochdale rapidly becomes squalid. However, the first section does contain a fair amount of engineering interest, firstly in the form of the Grimshaw Vertical Lift Bridge. This unusual mechanism lifts a busy section of road up in the air on four huge hydraulic rams. Interesting for us, but undoubtedly very annoying for the 100 or so vehicles we held up on their way to work. This structure is soon followed by a new stretch of canal which winds to and fro to get under and round the deafening M60. 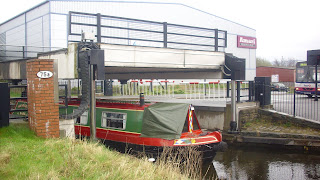 We arrived at Failsworth Top Lock at 8.27am and there next to the lock was a BW van, complete with a crew of three. Uh oh! if they need three people to get us down things must be bad indeed, we thought. This crew referred to themselves as the "A Team" and set themselves a target of getting us down and out to Piccadilly Basin by noon. 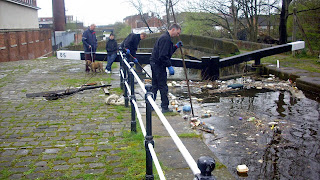 The next four miles took us through the centre of some of the grimmest sink estates that Manchester has to offer; Failsworth, Newton Heath, Bradford, Miles Platting and Ancoates. The canal dosn't pussy foot its way through these estates. Instead, it strides boldly through the middle of them, with its 18 heavily vandalised locks rubbing shoulders with houses, broken bottles and burnt out cars.
It is clear that the restoration of the Rochdale Canal was intended to introduce a green corridor to these troubles parts but sadly, as in Rochdale itself, the area is reclaiming the waterway for its own - sinking back into a wasteland after eight short years. The actual navigation channel was never properly dredged and instead a narrow groove was dug through the infill on the towpath side, with the spoil banked up on the offside. The restorers appear to have tried to make this vice into a virtue by using the dredgings as fishing points, and at other times by fencing them of as Sites of Special Scientific Interest (SSSI). Scientific Interest my eye - most of the steel rods are still there, delineating the boundaries of the navigation and ecology zones, but the netting they supported is long gone and now lurks on the canal bed like police "stingers", waiting to trap passing boaters.
Judging by the muck and debris in these "conservation zones" I can only conclude that their inclusion was a sop to the environmental lobby, and to add weight to the restoration business case. 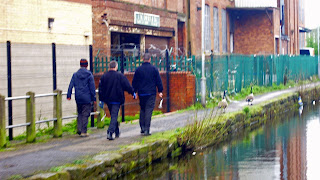 You can't fault the BW team - they were great. They clearly know the area very well and took every opportunity to chat to the locals, spreading goodwill and cheer. They are really good ambassadors for the canal and BW generally. We were told that with an 8.30am start from Failsworth we should have an uneventful passage, but the same couldn't be said for boaters who roll up at 10.30 am, by which time the local youth have surfaced and are out looking for amusement. There is absolutely no way I would willingly run this particular gauntlet without the support of BW.
The inadequately dredged pounds have another negative consequence. The current capacity is severely restricted and is incapable of accommodating an additional lock full of water. Even by draining the locks slowly the water levels rose alarmingly, pooling around the next lock and sending water cascading over the bottom gates. At least the floating rubbish was moved on a bit!

The estates looked like a city under siege. Ravi News at Shears Lock took on the air of a mini fortress, and the nearby Navigation Inn and local churches, which serve the various spiritual needs of the community, were crowned with razor wire. Not inviting.
The estates were mercifully quiet, with a cold wind kicking up the litter and the splattering of rain discouraging visits to the great outdoors. The individuals we saw were young, male and uniformly dressed in cheap hoodies, trackies and trainers - all with a pinched and furtive look topped off with a skinhead haircut. The label feral wouldn't be far off the mark. But in some ways I can understand their frustration. They live in some of the most deprived areas in the country and here comes some rich posh bloke (relatively) parading his shiny boat (toy) right through their patch. The hassle they cause isn't right, but then again the inequalities within our society arn't right either. Don't ask me for an answer; I can see the problem but not the solution!
My notes from the trip illustrate what you can expect along this stretch:
The housing stops at lock 71, after which the going becomes easier in a more industrial environment. The feeling of menace receding for a while leading to the attractive Regal Basin, which has been lovingly transformed. 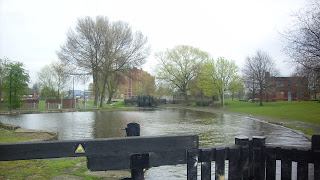 But then a change. The adjoining estates are devoid of life and boarded up awaiting redevelopment, with New Islington extending up the canal and crossing over from the bottom end of the Ashton Canal. Ancoats is an area reborn, with structures like Royal Mill converted into high class offices and apartments. 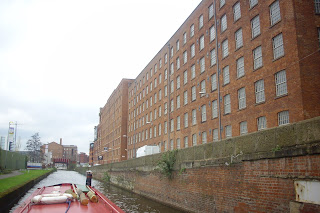 The "A Team" left us at Butler Lane Lock (81) at 12.00 noon, 3.5 hours after we started from Failsworth - 18 locks and a complete absence of trouble ago. We paused in Piccadilly Basin to have some lunch and then cracked on down the Rochdale 9. We had never descended the flight before, and were therefore unaware of the flooding the lack of by washes causes. At times the increased volume of water overwhelmed the following lock and towpath to the extent that pedestrians has to find alternative routes to their destinations. This issue was particularly severe at Dukes Lock, the last on the canal. The surplus water was so great that 10" was flowing over the gates and this last hurdle was the closest we came to getting stuck. It tool all our combined strength to prise the gates open and pass through. 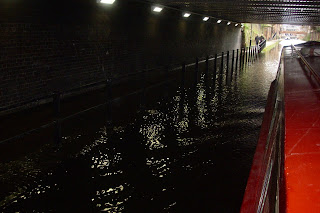 Just as we were about to exit Dukes Lock we were surprised to see nb Annabel 1 nosing up below. A lovely old gentleman draped in a well worn IWA sweatshirt appeared beside the lock and announced that they were heading up the Rochdale, aiming to moor at Failsworth where they would meet his family. The gentleman had failed to read his navigational notes or appreciated the magnitude of the task which lay ahead. We left him and his wife in the chamber of Dukes Lock engaged in a serious telephone discussion with BW! 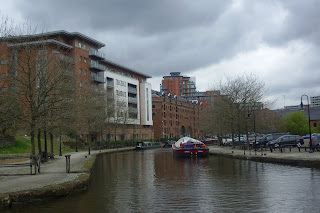 Rather than overnight in Castlefields, we decided to make for the country. We travelled for three hours down the Bridgewater, this time passing a great many boats from Worsley and Preston Brook Cruising Clubs, out for the Bank Holiday weekend. In the end we moored just beyond the Bollin Aqueduct, ready for a changeover with Martin and Adam the next day.

In a strange way I really like these grim industrial sections. They are canalling in the raw, stripped back to the basics and echo the scenes I remember from the 1960's. The threat of danger insn't pleasant, but it does provide excellent material for "pub canal stories". The danger is that these are the stories others remember, with all the more positive aspect forgotten. Make no mistake, the South Pennine Ring is one of the inland waterways epic journeys. The dangers reported in outer Manchester and Rochdale and more in the mind than an actual threat, and are far outweighed by the magnificence of the remainder.
Posted by Andy Tidy at 7:00 am