Gailey painted narrowboats
19th April 2009
Staffs and Worcester Canal
6 Miles
0 Locks
2 Hours
There are some days when you just have to be out on the water, and merely writing about it just isn't enough. It's barely a week since we returned form the South Pennine Ring, and only three days since Wand'ring Bark returned carrying her recovery crew, but I was already getting withdrawal symptoms.
I therefore spent my Sunday afternoon boating with Tilly, under the pretext of checking WB out to make sure she is ok. It was a lovely afternoon, the first of the year when a tee shirt is enough for even a southern softie like me. 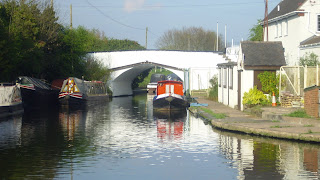 Martin (W) had warned me that he had been unable to get WB pumped out before he left her and that there was also a fair bit of water in the bilge from the burst pipe, so that was reason enough to visit and take a short run down to Viking Afloat at Gailey. Canaltime struck, as it always does, firstly with several gallons of water under the engine, closely followed by an inspection down the weed hatch which revealed a couple of metres of mooring rope tightly wrapped round the prop. By the time I had remedied these problems, had a good chinwag with the the other Martin (S) and set off for Gailey it was already getting late. 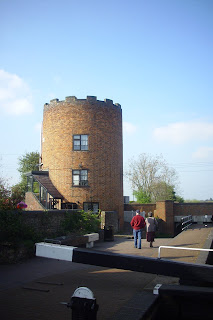 I warned Tilly that we could get all the way to Gailey only to find no one there. "That's OK", she replied "its a lovely afternoon just to be out on the boat". She can shows great discernment for a 16 year old! 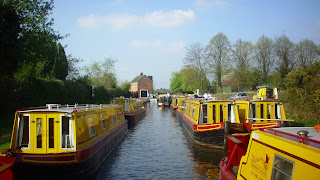 As it turned out the pump out machine at Viking Afloat was broken and awaiting a strip down the following day, so we winded in the already chaotic winding point just above Gailey Top Lock and Tilly steered all the way back past Four Ashes, giving me the freedom to take some photos. 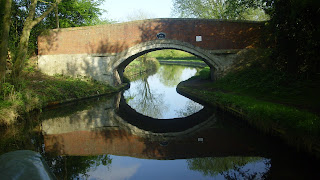 The bridges at Hatherton Junction have all been repainted in brilliant white and look spectacular! 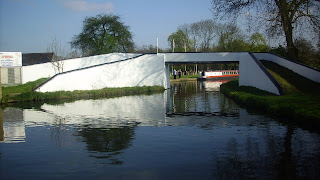 Well, that's it, just a short entry about a short but very pleasant trip. Back to the South Pennine Ring series tomorrow.
Posted by Andy Tidy at 7:00 am