We woke to find that the weather had turned overnight. The warm spring sunshine had been replaced by a threatening South Wester, blowing over the Pennine ridge. The overnight rain eased off at dawn, settling into a pattern of heavy grey clouds scraping over the moors, sprinkling us with fine rain, but never becoming heavy enough to warrant waterproofs. This was just as well because working 30 plus locks in restrictive waterproofs is profoundly unappealing. 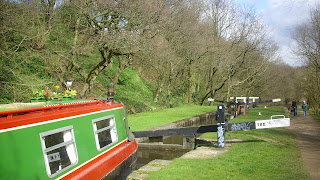 We were off by 9.30am, leaving behind or tranquil moorings in the winding hole above Booth Lock (31E). Whilst we had passed the tail of the restricted access flight to Marsden, the general quality of locks didn't improve. Almost immediately we were being regaled by cyclists and then walkers that we couldn't proceed down the canal due to a long empty pound. We take this sort of warning with a pinch of salt as we have never become inextricably stuck and have always made it to our destination in the end. The BCN is a good training ground for empty pounds!

The seven locks down into Slaithwaite (pronounced Slawit as in "ow", it hurts) were a dysfunctional bunch, rarely sporting a full compliment of paddle gear and often with protruding blocks of masonry pushed out by the water held behind the lock walls. We discovered that two distinct gauges of spindles had been used on the ubiquitous handcuff locks, and resorted to pin nose pliers at Millpond Lock (26E) where both sides used the smaller gauge. Whilst we got through, we called BW asking if we should leave it undone. Within 10 mins a BW van rolled up, driven by the supervisor from yesterdays tunnel passage. He gave us a multi purpose device in the shape of a cross, and reckoned that it should see us through virtually everything on the system. This was provided free of charge and is a must for all boaters planning to make the crossing. We were informed that Bufta Drifta were making their way down behind us so we left the locks off till Slaithwaite and a note to re lock then as they passed through. 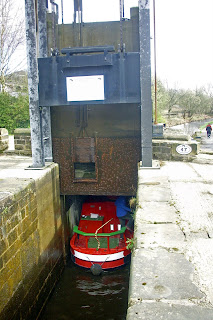 Shuttle Lock (24E) throws up a surprise with its guillotine gate at the bottom end. It looks like something recycled from the River Nene in the 1970's! This was one of the HCS's last restoration projects before the grand reopening and, after 130 stiff turns on the windlass, there was just enough room to squeeze through underneath - with the chimney removed. The lowness of the guillotine gate puzzled me, until we reached the new bridges through the town. This should really be called "Lowbridge" on account of the minimal headroom available. Even with the chimney laid in its side it was a non starter. Our first attempt merely resulted in the chimney being squashed into an oval about four inches in diameter, and the boat firmly wedged. Of course, we were a rarity on the canal so early in the season and having becoming jammed in the middle of the town, we attracted quite a crowd. In the end we had to remove everything from the roof and cast the chimney / coolie hat over the side to dangle on its chain. And so we squeezed through, with the chimney collar a mere inch or so below the unyielding concrete plate. 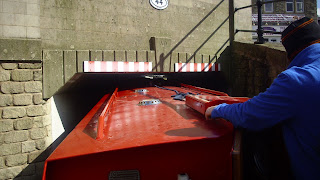 I suspect that these bridges will have stopped the unballasted La Viella Vinge in her tracks. But I guess that, at a pinch, you could always lower the pound via Pickle Lock and gain yourself a vital few inches if headroom.

Slaithwaite is a another town which turned itself upside down to accommodate the restored canal. However, in this case the restoration sits a bit more naturally in its midst than Syalybridge, and the extent of reconstruction isn't immediately apparent. 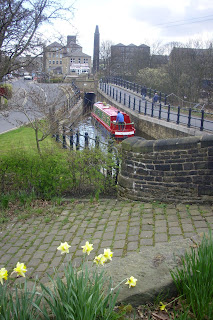 As we exited Pickle Lock (22E) we were unexpectedly faced with another boat. Not moving or planning to enter the lock, just sat there, tied up on the water point, completely blocking our line of exit. Irritating, but not the end of the world. We poled over to the other side, went round her and then tied up as closely as we could to reach the tap. This manouver was conducted under the suspicious gaze of ponytailed Mark, occupier of said craft, with his dog. Subsequent conversations revealed that he was a reluctant boater, moving the craft from Keadby to Coventry for a friend to be repaired. He told us that he was iced in at Keadby in January and, "by working every hours God sent", he had managed to reach Slaithwaite, after four months! It can't be more than four days "real" travel.

Mark is one of those slightly eccentric characters one finds on the waterways. Angry with the world and anything which prevents him doing exactly what he wants, when he wants. I asked him when he was booked to go through the tunnel, which elicited a surprised response and then a rant that it isn't open at all times to all comers. He was then off on a rant about BW being unable to impede his progress and his ability to wield an angle grinder in the direction of padlocks. It was strange that he should be in such a hurry given the time it has taken to travel from Keadby! None the less, I like to be in good terms with other boaters so I nodded sagely and then helped him compare the air draft of his boat with that of Wand'ring Bark, satisfying ourselves that he could both navigate the bridges of Slaithwaite (a good name for a film?) and the low points of Standedge Tunnel.

As we parted company and moved into the next lock (there is always a next lock on the HNC) we saw Bufta Drifta sail into our recently vacated mooring spot, presumably to restock with water and provisions, and possibly replenishing their dwindling supply of beer ballast. 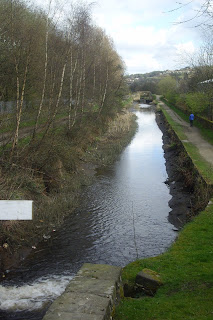 The empty pound came into view beyond Spot Lock (20E), and sure enough there wasn't anywhere near enough water to float WB. The pound is one of the longer ones at 400 metres, so we stole a foot of water from the town level, and then another from the subsequent one, which was just about enough to see us through. WB was on the bottom the whole way and could only be coaxed forward with the engine on tickover and the boat pole employed as if it were a punt, supplemented by a flush of water let through the lock by Jeff. We were every mindful of the need to leave enough water for Bufta Drifta behind us. Whilst I presented a confident face to Jeff it turned out to be one of the dodgiest pounds I have ever crossed, taking nearly and hour in the end. 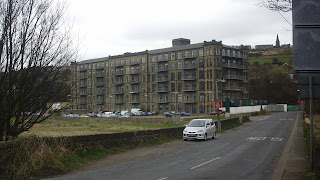 Just down the canal from Slaithwaite you come to the curiously named Titanic Spa, a mill converted into an upmarket health hydro and swanky apartments. "All very expensive" according to the locals.

A feature of this canal is the volume of water which cascades from the lock walls as you descend. There must be cavities behind the masonry of epic proportions, all of which seek to empty themselves into passing boats at a beathtaking rate. On a couple of occasions I was saturated up to my thighs and, more alarmingly, the engine room bilge accumulated several inches of water in the brief seconds us to pass under the cascades. 16E was a veritable Niagara, and has succeeded in pushing out a huge block of stone 2 inches from the lock tail. It will be both spectacular and devastating when it is finally pushed free. 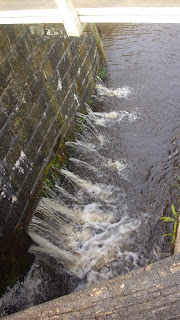 The locks come so thick and fast that Nicholson descends into a black blur of chevrons, to the extent that it is difficult to be sure exactly where you are and what comes next. The HNC Society Towpath Guide is invaluable in these sections, great save for its slightly impersonal use of lock numbers rather than their rather attractive given names. 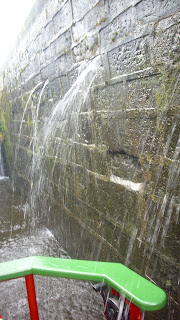 Milnsbridge is the last town on the canal before one reaches Huddersfield, and marks an end to the rural valley and the start of a very shallow urban section. The town has been busy converting its canalside mills into attractive apartments which is a far better end for these proud buildings than the crumbling decay so evident elsewhere up the Colne valley. Again, the lock chambers are very leaky and some, when full, send a torrent raging down the adjoining streets! 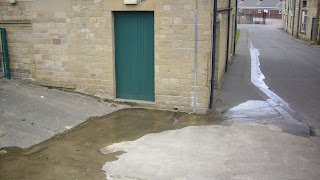 We finally passed our first oncoming boat as we attempted to leave Milnsbridge. I say attempted because as we exited lock 6E (Mark Bolton Lock) we grounded firmly on a huge shingle shoal and only managed to extricate ourselves with a good flush from the upper pound. The pound continued to be impossibly shallow all the way to Paddock Foot Lock and its adjoining Aqueduct, re crossing the river Colne. This stretch in from Milnsbridge is unquestionably dire, filthy, shallow and without redeeming features. There are no margins to the canal here, the bed simply rises above the surface giving to 12 to 18 inches of dry ground on both sides! Whilst the canal surrounds are uninspiring there is an dramatic view of the railway viaduct overhead. 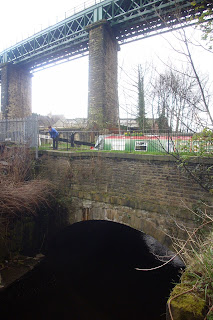 The remaining lengths are interesting only for the ingenuity employed to restore a path for the canal. Firstly there is Sellers Tunnel, a curving "cut and fill" affair which passes under the car park of the now defunct Sellers Engineers Ltd. The sides are made of steel piling topped off with a concrete lid - brutal and functional, but never lovely. With Sellers closed there is talk of opening this stretch out once more. 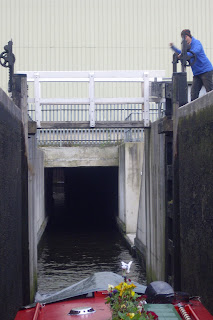 As we exited the tunnel we noticed the signs telling us to blow out horns during our passage and to listen out for the same. Shame we didn't notice them before we entered, but with so little traffic on the canal the chances of meeting someone were virtually nil. Next came another new lock which dropped us under Bates and Co. This time the tunnel was formed with drilled and poured columns of concrete of the type favoured in apartment block construction. The section was finished off with a rather impressive arcade of steel girders, which hold the sides apart on the approach to Huddersfield University, which stylishly utilises yet more redundant mills. 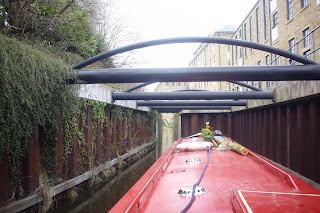 The Huddersfield Narrow finishes with a flourish. Lock1E (Stanley Dawson Lock) is within the very pleasant environs of the university and then it's onto the Huddersfield Broad Canal and out into into the clean and orderly Aspley Basin, our mooring for the night. The area is home to a thriving liveaboard community and it was reassuring to moor up among them, having first pumped the bilges and cleared the prop of the last of the HNC poly bags. 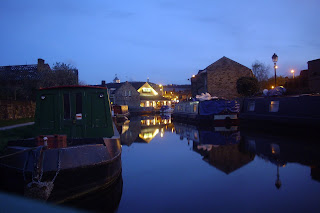 Mr D, I am sorry to tell you that our experience of Huddersfield was limited to sainsburys. We arrived just as the light failed and time pressures meant that we moved on again just after 10.00am the next day. I therefore cant say that we saw much of Huddersfield apart form the canal.

Mr D
Whilst I would love to leave you with the illusion that I am still travelling the Pennine canals, sadly my trip came to an end three weeks ago and I have been posting my blog entries retrospectively. The dates of travel are contained within the posts and when they are all published I will re date them for ease of reference. The blog entries are all written and diarised for publication every other day.
I am glad that you have enjoyed sharing our trip with us.
Captain Ahab