We had built a half a days flex into the schedule for eastern side of the Pennines but I had forgotten that the west to east passage happens in the afternoon so, having used this up on the first day, we decided to press on and get beyond Pig Tail Lock (32E) before nightfall. 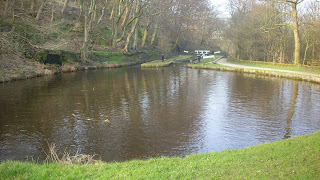 We soon passed La Viella Vinge, tied up by the top lock and back to her listing ways. As we were working through Smithy Holme Lock we were again accosted by members of the Huddersfield Canal Society committee. This time it was Ken Sykes and his wife (her initial is "M" but I didn't catch her name properly). Apparently, they had been at the Marsden portal and seen both the first and last craft out but missed our entrance. They therefore wanted to to come and say hello and share their joy at the first self steer passages which they had worked on for so long with British Waterways. Again, their enthusiasm and love for the canal shone through and they proudly turned my copy of Nicholson over to reveal their boat, nb Morning Mist on the front cover, complete with a back view of their heads. Fame of sorts! 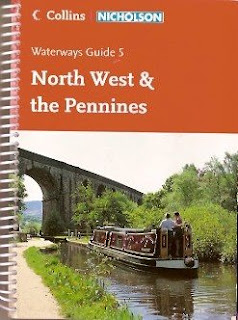 The top twelve locks to the east of the tunnel are slow and stiff, like their western counterparts. They have had very little use in recent months added to which they were restored nearly 20 years ago and and now showing signs their age. The winding gear is all hydraulic, rather like something out of the ark and was installed by HNC in the 1980's using a job creation scheme at a time when hydraulics were BW's preferred option. Their inability to be closed quickly has since been recognised and the policy reversed, but the gear remains on the canal for the time being. The lock gates themselves are in a poor state of repair, sometimes ill fitting, leaking, and on occasion, rotten. Ply inserts have been added to the lower gates but such temporary measures are reaching the end of their effectiveness. 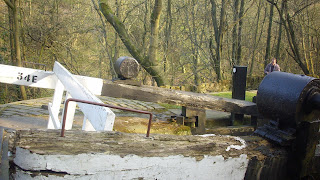 The intervening pounds are also very shallow having only had a cursory dredge during the restoration process, creating a navigation channel by piling the silt on either side. Over time this silt has migrated back to the centre with predictable consequences. The lack of capacity in the pounds means that descending boats sending mini tsunamis of water ahead of them, overwhelming the small by washes and causing water to cascade over the lock surrounds . However, What the canal lacks in depth it makes up for in beauty above the surface. This flight has a lovely rustic charm to it, similar to the Stratford canal soon after its initial restoration. 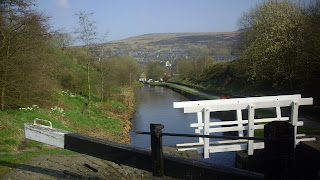 The lock chambers are made of large stone blocks which have moved over time to create very rough sides, and WB was caught up on three occasions during our descent. The issue with the slow close hydraulic paddles was very apparent at such times! On one occasion the base plate sank onto protruding masonry and WB heeled over alarmingly, before slipping free and righting herself with a huge wobble. 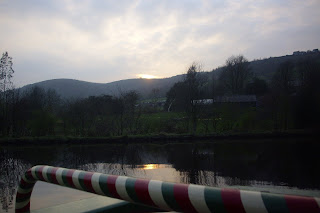 We finished our glorious day in the winding hole above Booth Lock (31E) right between the Sparth Reservoirs. Deep water margins are hard to find and this spot, recommended by Ken Sykes, was perfect. 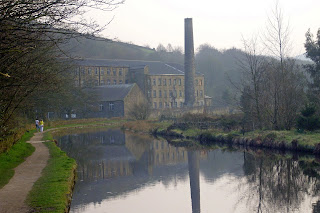