This is a book I have hankered after for ages. Its the first in a long series of boating books written by Roger Pilkington, but because it is the first it was a limited run and the going rate is £14 for a quality first edition - quite a lot for a book published in 1956. 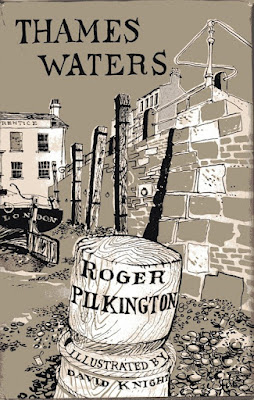 I came across this copy in a little bookshop in Lyme Regis, which isn't the most likely setting for a good haul of canal books. But maybe its obscurity is the reason it has accumulated such a good range - whatever the cause, I ended up with an armful of books and the proprietor ended up with £54 in his till! This little haul included Thames Waters, my prize acquisition which immediately jumped to the head of my bedside reading pile.

This is an account of Roger's purchase of a three year old Commodore's Barge from the Admiralty just after the WW2, and follows their exploration of the Thames and linked widebeam waterways  over what I would guess was a five year period.

The book provides an introduction to the 45ft x 10ft 6in Commodore and her conversion to leisure use by the Pilkington family. Out went the two big engines and in went a single smaller engine, along with bulkheads, bedrooms and a bathroom at a shipyard on the Medway. She sounds very grand but in reality she was just small enough to fit up the River Kennet to Newbury (the Kennet and Avon Canal was impassable at the time), Osney bridge in Oxford and the Grand Union Canal to the Midlands.

The book unpacks a family's growing love for the River Thames from mouth to source, and the pioneering exploration of the various offshoots at a time when they were under real threat of closure. It is strange to read of an ongoing campaign to retain the South Oxford - but that is part of the books charm. Its a product of its age and is a watery time capsule describing an age which has passed, but at the same time a river which has an enduring appeal. Who dosn't love the River Thames?

These early travels precede Pilkington's later accounts of forrays onto continental waterways, about which he is better known. Indeed, the book leaves them back on the Medway being encouraged to cross the Channel and seek waterways anew.

Is it worth £14? Well, sometimes one expensive good book is worth a dozen cheaper ones. Having got in at the start of the series I can now follow his adventures chronologically so you can expect more Pilkington Posts in the months to come!

Update
I have now become hooked on this series which includes: