A Short History of England
by Simon Jenkins
December 2012


I belatedly spent a last year's Christmas book token during a recent visit to York and purchased a copy of Simon Jenkins "A Short History of England". I have a strong interest in the overview, seeing the big picture and not getting lost in the detail. The title therefore offered hope of a helicopter view of England from the the Roman withdrawal through to the current coalition government - all within the the limitations of its 300 pages or 20 pages per century! 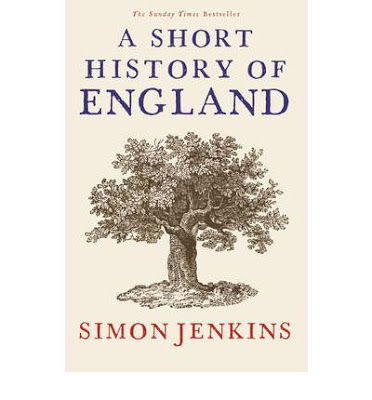 So what did I make of the book?

First off, its about England, not Britain or the UK. Its scope is defined by the geographic boundary set by the Angles who invaded a post Roman island and pushed a warlike bunch of Celts back to more of less their current borders.


The ensuing tale is one of a nation almost constantly at war with either the Celts, the French or very occasionally with itself within the confines of civil wars. Our relationships with our neighbours remain in constant tension - not much changes there.


But the core thread isn't the wars but the rulers who directed them, and their relationship with the rest of the population. Ever since kings needed to raise money to fight battles they were dependent on the population to raise taxes. This has always been an uneasy relationship because he who pays the piper calls the tune. The leaders of the day may think they run the country but in the final analysis, if the people don't give their consent we dig our collective heels in and force a change. Again - nothing new here.

Perhaps it is some of the snapshots which are most telling - historical factoids if you like.

And so, against this backdrop the political scene previously dominated by kings and their infant heirs moved to Westminster and an elected Parliament.

The evolution of the modern scene was, as Bob Dylan put it, a slow train coming. Each successive government built on the progress of the one before, sometime shading the colour / trajectory a bit, but pre election rhetoric rarely survives in the face of everyday reality. Perhaps the most powerful take away is that change does not come from Parliament - they merely progress our collective wishes. The real power for change comes from elsewhere, changes in society which politicians tend to begrudgingly adopt.

So what of the future of England? After expansion to a United Kingdom, a world Empire and then back down again we seem to be struggling to find our place on the world, or even in Europe!
Our age old feuds with our Celtic neighbours is mollified by devolution and probable ultimate independence, after which we will be back within our Anglo Saxon borders.   An ethnically diverse mongrel nation with strong streaks of independence and creativity thrown into the mix in equal measure.

England - this sceptered isle - there is nowhere else like it. We will get the government we deserve and in spite of their worst efforts - but we will be fine.
Posted by Andy Tidy at 6:00 am