The Lost Rivers of London
by Nicholas Barton (1960)

This isn't so much a book review as a book preview - a first in the annals of Capt Ahab and his Watery Tales. 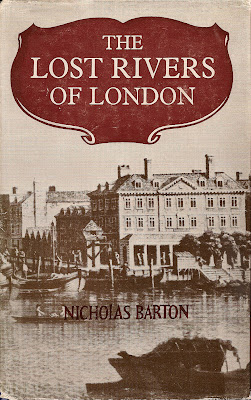 Normally I wouldn't consider reviewing a book before I had read it, and the unsteady pile of "to be read" books next to my bed bears testimony to this approach. And this book has been propping them all up for several months....

I have tried to read it, I really have, on several occasions mainly because its subject matter is quite compelling. Its a book about a man's passion / obsession with tracking down all the rivers which lie buried beneath the streets of London. I am thinking about the Fleet, Tyburn and Walbrook to name but a few - names you may have encountered in Rivers of London and its sequels if you have read them.

The problem with this book lies rooted in its origins. It is based on an award winning essay for the University of Leicester in 1960 and its academic pedigree  does nothing to enhance its readability. It is stuffed full with quotes and references with the footnotes sometimes at long as the core text. To make matters worse, the copy I have is an ex library book and lacks the vital pull out map to give shape and cohesion to what was an on the ground research exercise.

And so the book has languished unloved and unread, but now that is all set to change.

I was pointed in the direction of Diamond Geezer's London centric blogsite and there in the index is a section on the lost rivers of London. A written and photographic account of another mans obsession with this murky aspect of our capital. Does this all sound a bit familiar?

So now is the appointed hour to revisit what can only be described as a worthy tome. Geography dictates that I can never undertake this exercise in person, but I can walk the streets of London vicariously on line, page by page and river by river all from the comfort of my armchair at home.

Don't fear that I will become a couch potato - I still have a long list of BCN sites to visit and photograph. Who knows - they may even end up printed within the hallowed pages of Waterways World (part one of "The Arms of the Walsall Canal" is out in the January 2013 edition).
Posted by Andy Tidy at 6:00 am

I think there is another more recent tome on the topic too - last year? I got the impression DG was comissioned to write it but didn't, and someone else did. DG also has all his lost rivers posts indexed for ease of finding.

Are you aware of www.londoncanals.co.uk/rivers.html which has lots on the lines of the lost rivers? The rest of the site is good too, and that on the search for the line of the Croydon Canal puts some of your BCN backwaters in the shade for obscurity. Do keep them coming though.

Sarah and Bill - thanks for the comments. I found DG's index which was useful. I will look at london canals with interest.
Its good to see that there are anorak wearers the country over!