During our visit to the Banbury Canal Festival back in October I finally met Neil of Herbie and I couldn't resist asking for a look at one of his infamous Canalometers. 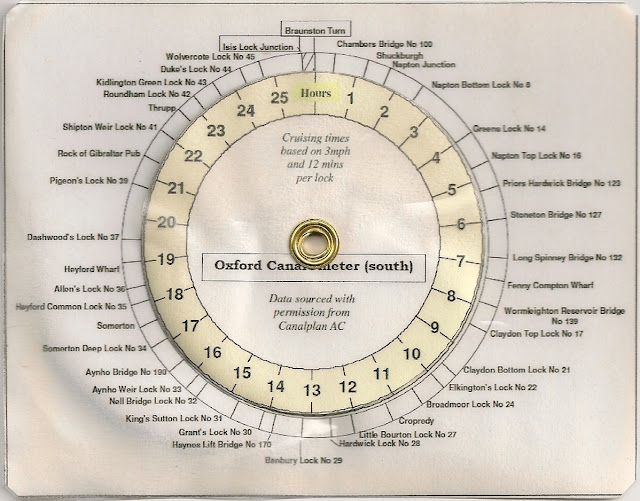 I had heard about them and even seen a version or two on his blog, but never actually used one. Its fab - great - simple and hugely effective.

Once aboard, what is the most commonly asked canal related question? It has to be: "How long will it take till we reach x". I waffle and give a vague answer based on pure guesswork and throw in some comment about canal time being stretchy to allow wriggle room. But the Canalometer brings a veneer of easily accessible science to the proceedings.

At its core its Nick's CanalPlan data on travel times between points on the canal using assumed travel speeds and lock times but its mobile, able to be slipped into the cover of your canal map book and used as a quick reference guide.

The one he gave me is based on a single canal, the South Oxford, marking the relative landmarks between Braunston Turn in the north and Isis Lock in the south. Its set out as a pie graph in the background and a second smaller disc with 0 to 25 hours marked out. By zeroing your current location you can work out how long it will take you to get to whatever other location you fancy.

Like the standard Canalplan output, it may be a bit optimistic or pessimistic but you soon get a feel for how the timings relate to your usual speed of travel. For us, we travel a bit faster.

So, I am a convert. Its a handy tool but sadly Neil hasn't created a version for the Midland and Northern canals where we tend to hang out. None the less, its a great idea.
Posted by Andy Tidy at 6:00 am

I keep meaning to have a word with Neil about this calculator.
If it was built the other way round with the hime on the back and places on the disk it could be mounted on a board with a spindle for the disk. That way you would only ever need one board and just put different disks on the spindle.

That's and interesting idea Brian. I know that one of the hardest things in lining up the place names, and there isnt much space inside the wheel, but if you did as you suggest with the time round the outside, the inside wheel could be bigger and maybe have the names radiating like spokes.
I keep thinking that there is a financially viable concept here and your observation may be the key.

Thanks guys. My version 1 was in fact one with the places on the middle disc, but that was hand done. The computer version would be a nightmare to do that way. Also the number of hours needed can vary greatly so a universal back with hours on it might enforce very crowded front discs for some canals.

Andy, I might well get round to some more midlands canals when I get time.