If you fail to prepare be prepared to fail.

I know it's a trite little saying, which is usually used about the need to plan, but it is very applicable to painting narrowboats.

Its hard to emphasise just how important preparation is - or how great the temptation is to skimp on this vital stage, especially when your arms ache from hours of hard sanding. However, it's a false economy to short change the preparation stage, and a few extra hours at this end of the project will add years to the life of your finished paint job.

Be very thorough to sand everything down, probably using wet and dry paper to achieve a good key, smoothing off all the blobs, chips, stray lumps of weld and sundry imperfections. A smooth clean surface at this stage will give you a fighting chance of a good glossy finish at the end, but any imperfections left on will be magnified by the topcoat.

I started my preparations on Wand'ring Bark with good intentions. I wasn't going to skimp of the preparation and I was going to work at it till the surface was perfect. My problem is that I am somewhat lacking in patience and always willing to accept a compromise. You may not agree, but I think that being a perfectionist is more a curse than a blessing!.

The need for preparation on Wand'ring Bark went deep. When built, the shell was fabricated proficiently, but no effort was made to hide the welds. As a result the joins in the sheet steel were very visible with "blobby" welds running down the cabin sides, rising above the surface in some places and dipping into little craters in others. I resolved to rectify this deficiency so I attacked the welds with my trusty 110mm angle grinder and, 1.5 hours and 12 discs later, all the raised bits had been neatly abraded away. This process was followed up with the application of a layer of automotive body filler, which concealed any residual depressions, all smoothed off with some fine wet and dry paper.

I am particularly proud of the end result as a mixture of diligent application and judicious positioning of the side panels, has resulted in a weld free cabin.

However, I did make a bit of a mistake on the roof. The roof was covered in a thick cream non slip finish and as I ground away the top welds, I created a shallow saucer like indentation, more in the non slip surface than in the underlying steel itself. The presence of the thick anti slip coat meant that body filler would stand out badly, so I had to rely on the flattening capacity of the paints which would be applied. More of that in a later blog. I would have made my life easier if I had used a larger angle grinder as the tendency to create a rounded depression would have been lessened.

With my angle grinder to hand I also decided to remove a rather strange and pointless bit of steel scroll work which adorned the end of the hatch cover. It looked a bit like a Flemish Gable and had no link with any other part of the boat. The end result is a much more discrete 5mm raised lip which is just enough to close the hatch. I suspect that I destroyed the manufacturers "signature" but hey ho - its my boat.

So there you have Wand'ring Bark, my pride and joy, sitting at her moorings with all her paintwork scratched to a dull matt finish, interspersed with strips of grey filler concealing the welds. I figured that if you are doing a job you may as well do it properly, so I took the wet and dry to the sign writing, removing all traced of "Piccolo" in about 60 minutes flat. At this stage she looked in a right sate! 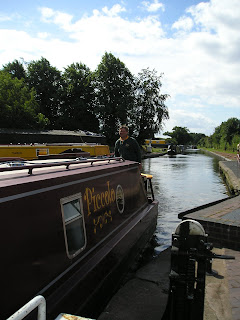 It was here that I took a bit of a shortcut that I later came to regret. Whilst I had done a thorough job preparing the cabin sides and roof, plus the strip round the gunnels, I didn't go as far as removing the mushroom vents or the window frames. The books say you should, but it seems like a lot of hassle for items which were very firmly fixed in place and holding the water out vary adequately. It seemed like a case of "if it ain't bust don't fix it"!

Two years down the line and I see the errors of my ways. The mushrooms and windows are screwed in to a bed of silicone and a bit of silicone inevitably oozes out as they are fitted. Paint does not adhere well to silicone and within twelve months, the new paint was lifting up at the edges. I have subsequently removed the vents and painted under them, as I should have done at the outset, and the same process will probably be needed for the windows. You live and learn!

The take away thought has to be that you can't spend too much time on preparation. Allocate at least twice as much time to preparation as you do to applying paint and you probably won't go far wrong.
Posted by Andy Tidy at 9:00 am

Dear Captain Ahab - we have been reading your narrowboat painting posts with interest as we are about to embark on a paint job of our forty foot nearly forty year old traditional stern narrowboat. She has had a serious number of paint jobs in her time, but given that, is not badly rusted, just pitted from repair with the current cheaper paint job pealing away. We are planning to borrow an angle grinder from a friend for a thorough rubbing down and smoothing - and probably have a week maximum to do the whole job, at least for this winter, including to top coat . If we work all day, assuming good weather, how long do you think the sanding/cleaning part of the work will take, and do you have any tips with the angle grinder, and do you think we can do it? - many thanks, Sophie and Jane

Jane
I fear that a single week will be inadequate, particularly in the short cold days of winter.
Preparation takes ages and be reall careful with an angle grinder or you will find you abrade scallops of metal away leaving an uneven surface.
My repaint started fron a sound base of the initial paint job.
Can I suggest that you try a test area first, maybe round the stern and see how long it takes to achieve a good finish.
Go for quality paint every time - good thick resin and high pigment content - something like Craftmaster or Rapidpaint.
My top tip would be to avoid doing it all as a single project. Do a bit, get it finishd and move on. Maybe the roof then one side and then another.
Taking it in chunks minimises the likelihood of you losing heart and doing a quick job that leaves you dissatisfied.

I've just purchased a narrowboat in need of some TLC, and am keen not to rush the job. But I'm struggling t find a yard that isn't booked up for the next 3 months.

Do you thiink the finished result would suffer by doing the job in sections?

Also, I'm worried about using an angle grinder to do the prep work in case I get too carried away and end up eating away at the steel and not just the old layers of paint. Is this a realistic possibility, or am I worrying about nothing?

Steve
You are right to worry about using an angle grinder to strip the old paint. I have used one but only to flatten some raised welds - and I did dig into the steel a bit.
Try a RotoBlaster:
http://captainahabswaterytales.blogspot.co.uk/2011/11/tercoo-rotating-blaster.html
They cost £40 but do an excellent job without abrading the steel. You can see in in action here:
http://captainahabswaterytales.blogspot.co.uk/2011/11/stripping-and-bare-bottoms.html
A whole boat is a big job so ther is no harm in doing it in bite sized chunks - the roof is a good place to star and work down. You dont even need to do both sides at the same time as you can only ever see one side at a time!
Good luck - I saves loads of money and if you ding it you know you can always touch it up.
Andy

I have just cleaned the bottom of my narrowboat with one of those rotoblaster things. Much to my surprise it was excellent, nearly as good as shotblasting and in the same time! i knackered 1 by ignoring Captain Ahabs advice and attacking the rubbing strips first but even so it removed all old paint, scale and rust leaving gleaming silver steel behind (heavily pitted unfortunately but that is another story)I used to be a steel fabricator and have not come across a gizmo better suited to this job