30 Miles
1 Lock
10 Hours
The moorings between Barnton and Saltersford tunnels are to die for. The canal forms a small tree lined lagoon with open views to the west over the River Weaver, about 80 feet below. Overnight the weather had turned mild and the heat from the stove became overkill. As a result we spent our first might of the 2009 season with the hatch open and us comfortable and warm below. 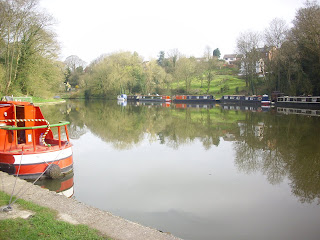 The Barnton and Saltersford tunnels and a pair, similar in length and both so twisting that it is difficult to get a line of sight before entering. That said, there was so little traffic that the danger of meeting oncoming boats was slight.
We paused at the Black prince base at Bartington Wharf, where we hired nb Kiwi three years ago, and topped off with diesel at 82p per litre on a 60/40 split. There are few suppliers in the Pennines so we wanted to ensure we had enough to get there and back without fear of running out.
As you pass Anderton the Trent and Mersey takes on a more remote feel, with reed margins stretching to the middle of the channel. The canal runs up a small wooded valley till the contours finally run out and the builders were obliged to make the 1239 yard Preston Brook tunnel. This tunnel operates on a one way system, northbound on the hour and 10 minutes after and southbound on the half hour and 10 minutes after. We arrived at 11.15 so had a brew and waited for the noon slot. By 11.55 am no one had entered the tunnel from the other end (there is a good line of sight) so we set off, emerging 20 mins later at 12.15. 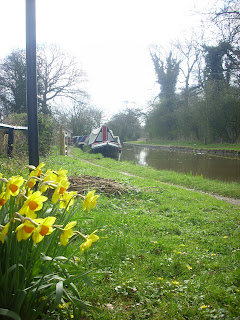 The Bridgewater starts just inside the northern portal of Preston Brook tunnel and immediately the canal becomes deep and wide, encouraging a bit more throttle and higher cruising speeds. We soon reached the facility at Daresbury, described ambiguously as a "laboratory" complete with well tended gardens and a tennis court. I didn't see and two headed rats but I did see a lots of happy smiling employees taking in the air on the canal bank. Scary.
Whilst the Bridgewater may be broad and wide, it is plagued with linear moorings and none more extensive than Lymm Cruising Clubs two sites. One in town and the other out to the north. I was rather taken by the "Commodore's Mooring" alongside the clubhouse - all a bit too "golf clubby" for my taste. With so much time spent crawling past moored boats I was interested to note the local popularity of anti fouling paint in blue and red rather than the normal blacking. There must be a reason for this - maybe the area suffers excessive weed? 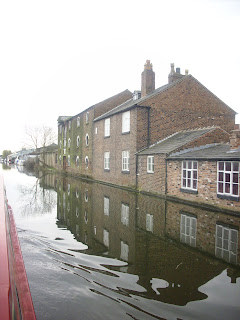 Facilities on the Bridgewater are few and far between so wo stopped at one of the very few (and very slow) water points at Little Bollington. At this stage I took a very unsatisfactory call from Tilly, who was being petulant as is her want - but the less said about that the better. Hope dissipates like woodsmoke up a ventilation shaft.
By the time you reach Oldfield Brow the countryside concludes and the onset of sale marks the start of urban waterways with the associated grot and grime. Each successive cruising club becomes more down embattled, clinging on by their fingertips. When boaters resort to covers on their windows you know that the location is an inner city step too far. 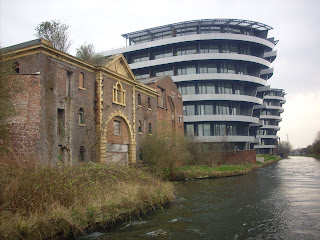 Sale is clearly attempting some regeneration along its waterfront, with swanky futuristic flats rubbing shoulder with redundant canal side warehouses. The depressed economy isn't treating these locations well and many appear to be empty. I wouldn't fancy an apartment huddled behind high fences and razorwire.
The western entrance to Manchester is very industrial, and the absence of urban housing means it feels quite safe and secure, past container depots and the Theatre of Dreams - the Manchester United Stadium. Very impressive and some reasonable moorings exist opposite the stadium. 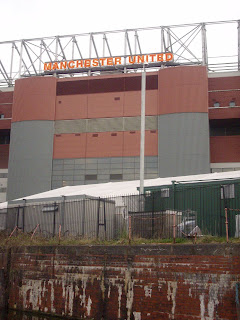 The last mile of so of the route into Castlefield is full of enticing backwaters and arms, mostly boomed off save Pomona Lock - gateway to the Irwell and Salford Docks. We would have liked to explore but time was against us. We moored in Castlefields basin, in the central bay next to the YMCA. There are always folk around here and we have never had any trouble. Tomorrow its the Rochdale nine and the notorious Ashton canal so its alarm clocks set for 5.30 and off for a 6.00 start. Jeff is not enthusiastic!
Posted by Andy Tidy at 8:17 am