There's a corpse on the boat!

Well, that's how it all started. A friend had borrowed Wand'ring Bark in late summer 2007 and returned earlier that expected, due largely to an intolerable whiff from the dump through toilet. "We had a lovely few days on the Shropshire Union, but my wife just can't stand the smell of the loo. Have you got a corpse hidden down there?" he asked.

Whilst I had been denying it to myself, I was aware that the loo was unsavoury and getting worse, but being an optimist I always figured that the next pump out would do the trick. It didn't, nor did the next one, or the one after that. No matter how much I pumped and rinsed the smell just kept coming back.

By September I decided that direct action was called for so, armed with marigold gloves, a "pooper scooper" (made out of a 4ltr milk container with the bottom cut out), a 5 gallon waste tank, a stiff bristled brush and a litre of bleach I accessed the holding tank via the inspection hatch. The stench was vile and after much scooping and reaching into the far end of the tank with the brush taped to a length of stick, I managed to recover nearly 12 gallons of fetid slurry.

With the offending residue removed the entire tank was bleached out and all traces of smell disappeared. Fantastic! Job done! Its a goodun!. I may love my boating but this task really pushed the envelope. I had three showers when I got home and the smell still lingered around me. This is a job I really don't want to have to do too often.

All was well throughout the winter, but lo and behold as spring of 2008 turned to summer so the corpse staged a gradual return. OK I thought, dump through tanks and me just don't go together. I decided to rip out the toilet and tank and replace it with a Thetford cassette system. I even went as far as bidding for one on e-bay, but luckily without success.

A perusal of a few discussion forums suggested that my problem may be a lack of ventilation. I was informed that dump through tanks need an opportunity to breath, which lets the microbes do their stuff, which in turn results in the contents degrading down to an inert residue. As I couldn't see a breather pipe in my system I figured I would need to fix a pipe through the top of the tank and out through the side of the hull, a project which would be substantial but not as massive (or as costly) as the complete replacement option.

Before I had an opportunity to implement this plan a chance conversation with one of the engineers at Anglo Welsh Great Haywood gave me an alternative approach:
Do you know the "guess that this is" game?

Well here is one of my own - whats this? 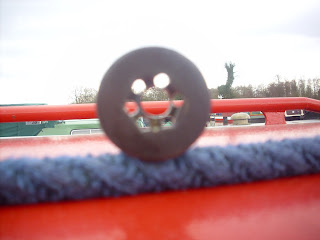 No idea? Well, when when its fitted it looks like this: 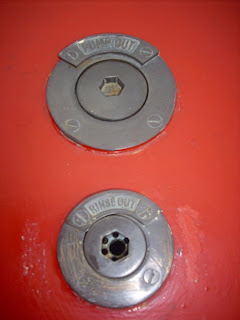 That's right, its my toilet rinsing inlet cap with a whole load of holes drilled in the bottom of the hexagonal key hole. Amazingly, these few holes have made the world of difference, noxious gas escapes and fresh air enters. Within a few days of applying this technical marvel the corpse vacated my holding tank seemingly forever. The ventilation started in July 2008, the last pump out was in early August and here we are, seven months later and whilst the tank is a bit full, there is still no smell.

So I would like to extend my thanks firstly to Anglo Welsh for a snippet of free advice, and secondly to the billions of microbes who can now breathe happily and work their magic in my toilet.