Those of you that read my blog regularly will know that I can't resist exploring backwaters that I come across in my travels. Well, this weekend I cane across the Directors Cut, and whilst I won't be travelling it myself I am in close contact with someone who is making the seven week journey, and I will report on his progress from time to time.

But what is The Directors Cut?

The Directors Cut I am referring to isn't a waterway at all, but is actually Clint Eastwood's latest movie project, The Human Factor. The film is currently being shot, starring Matt Damon and Morgan Freeman and is about the 1995 Rugby World Cup, hosted by South Africa during Nelson Mandela's 1st term as president. It was seen as an excellent opportunity to unite South Africa after the end of Apartheid and culminated in an epic battle between The All Blacks and the host Springboks.

But why should I take an interest in a film about Rugby? Well, in addition to Messrs Damon and Freeman, guess who has been cast in the role of Jonah Lomu, widely attributed as the tournaments top player and first global superstar of Rugby Union? None other than Zak Feaunati (recently of Bath and Samoa), who is winging his way to tinsel town as I type. 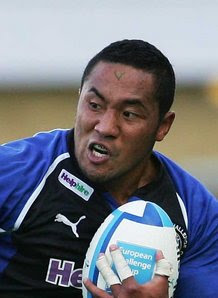 Now this is interesting because I work with Zak's wife and have spent the last week experiencing the nail biting audition process which culminated in a celebratory round of texting when he was notified of his success late on Friday evening. Whilst Zak has wide recognition in the field of Rugby, this represents his celluloid debut, and his success in being cast as Lomu is like winning the lottery and X Factor all at once.

So with 24 hours notice he is off to the Hollywood, exchanging leafy Sutton Coldfield for the Silver Screen.

So, if you like Rugby, or films, or the inside track on making movies, watch this space. I don't suppose that Clint will ever call me up and "Make my day (punk)" but I can experience the thrill of the ride second hand, and I plan to enjoy every step.

I'll see you all at the Oscars.

If you want to know who won the tournament you will have to wait for the film to be released - or do a Google Search!
Back to watery business as usual tomorrow with the first entry in Belle's Blog.
Posted by Andy Tidy at 10:05 pm