Part one of seven

If you have arrived at this page looking for tips on watercolour painting, and how to achieve the perfect canal reflection using mixtures of Burnt Umber, Raw Sienna and Vermilion you will be sadly disappointed.

Whilst I do like to dabble in watercolour painting, and the inland waterways offer a ready supply of inspiration, I am talking about actually painting narrowboats. You know - sandpaper, two inch brushes and oil based topcoats - that sort of thing.

So, if you are thinking about repainting your boat the big decision isn't "what colours do I want?". The real question is "do I tackle this myself or leave it to the experts?". If you are pondering this weighty issue I would suggest you consider the following issues:

So the answer to the DIY / professional dilemma lies somewhere within the above. I live my real life in a project management environment where the commission is always a variation on the theme of "I want it better, faster and cheaper" - all at the same time. Now I am experienced enough to know that this conflicting triangle of demands is impossible to satisfy, and the same is true in the field of boat painting:
You need to decide on your priorities and personal skills, and then make your decision accordingly. But before you decide that a DIY repaint is all just too much hassle remember, that shiny new paint job will fade and scratch and in a few short seasons the boat will have reverted to its rather dull and tarnished former self (but hopefully without any rust). 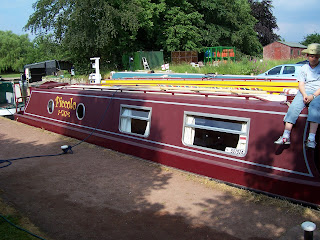 Wand'ring Bark - before (as Piccolo)

When we bought Wand'ring Bark she was only three and a half years old, but by then her paint job had already faded and started to go chalky. Actually, she wasn't even called Wand'ring Bark. Originally she was named Piccolo, an abstract sort of name that the previous owners thought would be inoffensive to and subsequent owners. The generally poor initial paint job applied by Eastern Caravans and Narrowboats, or maybe the fabricators, Floating Homes, meant that a repaint was needed urgently.

Wand'ring Bark is cruised quite heavily and my interest in the exploration of the less travelled extremities of the system means that she has quite a hard life. Her paintwork can therefore take a hammering, so it is just as well that I subscribe to the school of thought that says that paint is first and foremost to protect against rust. You paint a boat so that you can have fun knocking it all off again!

With this mindset in place I decided a DIY paint job would be be ideal, providing the end result looks smart and professional. As well as being so much cheaper, it has the added advantage of being touch up-able (is that a real word?) when the inevitable scrapes happen. 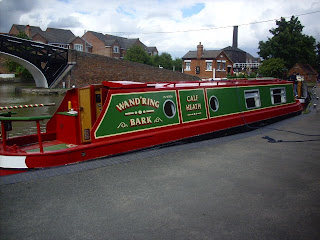 And after
Was this the right decision? Well, it's now two years since I started the repaint and I guess that the proof of the pudding is in the eating. This is the first boat I have fully repainted and predictably, I got some things right and in other areas I got things rather wrong.

It's good to learn lessons from your mistakes, but it is even better to learn from the mistakes of others. I will explain all in a series of seven blogs on Painting Narrowboats:

You really are a Jack of all Trade are you not? I have a tin of blue paint that I do a little touching up with...and Jim McCormack has touched up the sign writing when a bird left a message that took some of his wonderful paint work off.

Next Monday I do the blacking.... I'm scared...LOL

I have an irresistable urge to have a go at most things.... but I draw the line at brain surgery!

At some stage over the summer my boat will hopefully be finished and on the water and looking for somewhere to get its coat of many colours. Actually predominantly Black.

I believe black is very difficult and best results are spray painted. I don't think I am up to doing the first paint job as preparation is always my downfall in all thngs diy. But at all black I hope to be able to touch up as and when. Hence I will be dispensing with coach lines!

From
The bodger, shut one eye and squint with the other,
Alias Kath

Thanks Bodger. Lots of people want to know what was involved, so I figured a short series of blog posts might be of interest. They will be published every other day or so.