Sunday 17th May 2009
18 Miles
20 Locks
9 Hours
Our mooring alongside Symphony Court was excellent and the offer of a return visit will utilised, many thanks Nick.
Jeff had departed the previous evening, leaving just Mr Truth and myself on board. We slept reasonably well, but the occasional shouts and cries from late night revellers echoed along the canal, never enough to wake us but repeatedly causing us to rise close to the surface of our slumber.
We were both awake at 6.00am so we rose and slipped the mooring lines at 6.30am, taking care tot to wake local residents and exiting Sherborne Wharf at the northern end. The canal was wide enough to allow WB to turn, but only just. There was something magical about Brindley Place, Gas Street Basin and The Mailbox in the first light of dawn. We moved almost silently across the still waters with smoke curling up from a re stoked fire, talking is lowered voices without a soul to be seen - such a contrast to six hours earlier! 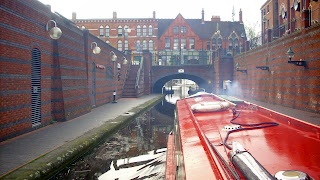 The Worcester and Birmingham Canal takes its leave from the BCN at Worcester Bar, and immediately plunges into the leafy suburbia of Edgbaston, initially tracking Broad Street, and then on out beyond Five Ways and the playing fields of Jeff's school. The railway is a constant companion as you move south, past Birmingham University complete with its Hydrogen Boat, and then on to Bournville Station painted out Cadbury's purple. This five mile stretch to Kings Norton Junction is quite pretty, but repetitive, reminding me of the looped TV scene in the film Speed. 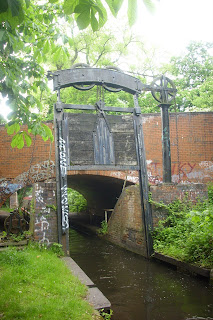 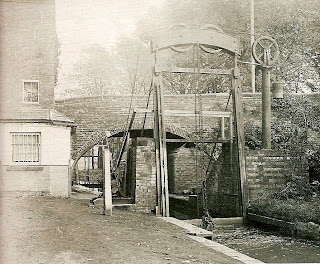 
By the time we reached Kings Norton Junction the joggers, cyclists and dog walkers were out in force, congregating at the junction and keen to watch Wand'ring Bark pass by. This section is rich in canal structures, with a picturesque Canal House on the Junction, followed by the unique guillotine stop lock and the 275 yard Brandwood Tunnel sporting an image of Shakespeare on the northern portal. I say and image, but in reality no one knows what he looked like and there is considerable debate as to who he actually was. Another interesting structure, or should I say "non structure" is the famed Lifford Lane Bridge, cause celebe of the pioneering IWA. The fixed bridge was replaced with a swing bridge which has itself been removed and the road (actually called Tunnel Lane) blocked to through traffic. 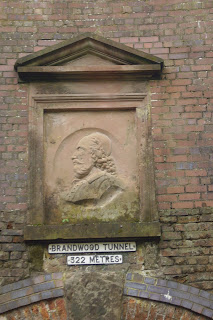 The good weather gave way to incessant rain for an hour and a half, as we made our way past the thriving Lyons Boatyard and a number of very substantial developments, which looked for all the world like inner city redevelopments, but were located way out in the countryside. The Waterfront at Dickens Heath was a case in point. Its huge blocks of apartments centred around a water cascade would not have looked out of place in Cabot Square, Docklands.
The wisest comment of the day was heard at Ladys Lane Wharf, where an elderly boater jumped from his craft as the rain started, saying "well that's it for me, its too wet. I'm stopping for the day". We pressed on through the rain, eventually mooring just beyond the Wharf Tavern at Hockley Heath. The tavern has a small inlet in front of it and it was all we could do to stop ourselves trying to insert WB under the towpath bridge. Its a good job we didn't try, the water is shallow and the last boat to attempt the manoeuvre had to be towed back out! 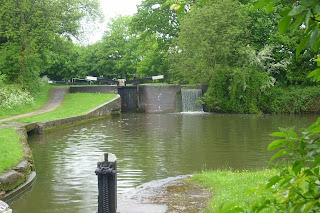 We played cat and mouse with Alvechurch's Mountain Thrush through the lift bridges and passed them after the first couple of locks under yet another downpour. Our progress down the Lapworth flight was further hindered by Anglo Welsh's Osney, who's crew decided it was OK to leave the bottom gates open and the paddles up! We take most things in our stride but this was laziness on a big scale! Mr Truth trotted down to them and put a stop to this antisocial practice for the last six locks. Osney turned at the bottom and its crew slunk away inside, ashamed to show their faces as we passed. 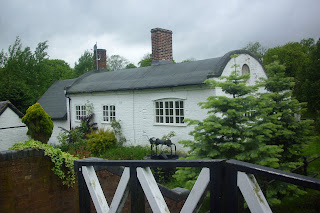 We reached Kingswood Junction at 4.00pm, turning onto the Grand Union just as the rain got going again, giving us one final soaking as we moored close to The Navigation Inn. We dipped our rods in the water but there was little action, save one good bream hooked by Mr Truth, so we retired to the pub and supped a few pints in the company of the Kingswood regulars.
Posted by Andy Tidy at 7:00 am