27 Miles
33 Locks
12 Hours
After a peaceful night, away from the motorway and rails, we started the return leg of our journey at 6.30am in reasonable weather. The rain clouds had blown over and the sun shone intermittently. After the narrow and shallow Stratford Canal, the Grand Union seemed very wide and deep, but in the main featureless. Linear mooring came and went, breaking the monotony, including two nice looking pubs near the Black Buoy Cruising Club, with their diminutive slipway.
The five locks at Knowle came as a pleasant interruption, built to the same design as the Hatton Flight, with reeded up square side pounds and attractive lock keepers houses. Parts of the six old narrow locks are visible on the towpath side, some with just one wall showing and others serving as weirs. 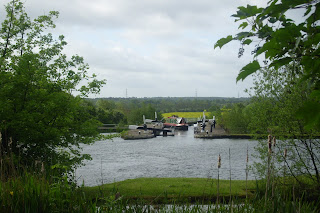 The Knowle summit pound strides across the Warwickshire countryside, burrowing under the M42 and Copt Heath Wharf, before reaching the prosaically named Catherine de Barnes with its oh so English cricket ground alongside the canal. From here the navigation starts to edge into suburbia, diving through deep tree lined cuttings only to emerge to reveal an ever increasing amounts of urbanisation. With the housing comes the surface debris, and unidentified clonking objects under the bridge holes.
The suburban towns come and go, Olton and Ackocks Green before the industry starts in the form of the Birmingham Incinerator (sorry, Waste Energy Reclamation Centre) followed by the sprawling Ackers Trust Adventure Centre where a huge climbing wall looms over the canal and a volunteer work party form Barclays Bank was hard at work. The canal then starts to penetrate an inner city scene including Small Heath and Sparkbrook, before reaching the top of the Camp Hill Locks. The top lock is the site of some very impressive and underused BW facilities, paid for as part of a development project which never happened. A good sized basin exists which, at a pinch, could offer a safe mooring if you were tucked away at the back and were not averse to isolation.
Camp Hill marked the end of the 1930's widening scheme and from here on it's back to the narrow canal. The flight carries relatively little traffic and dodges around Birmingham's inner city ring road with St Andrews Football ground perched on the hill above - soon to return to top flight Premier League action. Whilst this is inner city, the locks remain unlocked which is a good sign.
Bordesley Junction sits at the foot of the six Camp Hill locks, splitting the Grand Union with one arm heading north to terminate at Salford Junction (Spaghetti Junction) via the Saltley Cut and the other continuing to Warwick Bar and the junction with the Digbeth Branch of the BCN. This short stretch is packed with interest for canal historians, including The Bond, The Banana Warehouse, Fellows Morton Clayton Warehouse, the Rea Aqueduct, plus the Proofing House, all in about 400 yards. 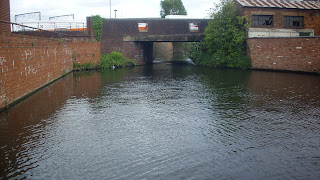 Our dedication to the backwater bagging cause remains undimmed so we took our lives in our hands and tentatively nosed through the barriers and into Typhoo Basin. Much to our surprise the two arms were devoid of rubbish and we are able to wind without fouling the prop. Apart from a few scratches form the trees at the entrance we emerged unscathed.
We then made our way up the six Ashted Locks, which were also clean and rubbish free. We glimpsed a pub called The Moby Dick, which held a fascination for Captain Ahab but like the real whale, was tantalisingly out of reach. Instead we settled for beans on toast and a bottle of beer in the chamber of the top lock at Waterlinks. Farmers Bridge locks followed, all set in our favour and were cleared in little over one hour. 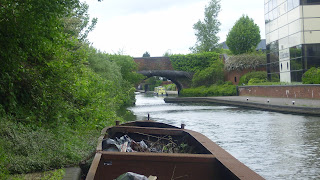 As we entered lock 13 (bottom) I noticed a couple of vagrants sleeping in an alcove. I took great care to be quiet and not disturb them, only to look up and see the upper windows of an adjacent building flung open and a rock band start a practice session. We could hear them clearly three locks away but I needn't have worried about the vagrants slumber - they slept on! 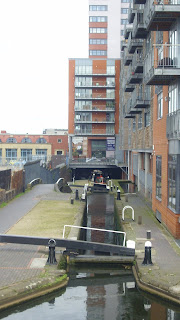 On reaching the top lock I nipped into the lock keepers office to try and buy a copy of Geo Projects map of the BCN. Albert told me that he didn't have a copy but try the BW shop 100 yards further on. No problem, and off I trotted. The snag was that BW only open the shop when two or more staff are present, and only one was! My frustration was short lived when Albert, spotting my predicament, wandered over and lent bodily support and facilitated my £5 purchase. I like my much abused copy of Pearson, but the complexity of the BCN means that seeing it as a whole is difficult. In this respect the Geo Project map is very good, covering all the BCN and associated regional waterways.

We passed Old Turn Junction (National Sea Life Centre) at 3.15pm and were aiming for the Black Country Museum for the night. This meant running the mainline gauntlet with the kids out of school - not ideal, so we kept our eyes peeled for trouble. We made it through Smethwick without nothing more substantial than a banana skin being aimed in our direction, and took great care to watch out for activity on Galton Bridge as we exited Galton Tunnel. The northern reaches of the Old Main Line are rather remote and exposed so we nipped up the Gower Branch and through the three Brades Locks, two of which comprise the only staircase pair on the BCN. It was then a fairly straight forward run along the Old Main Line to Tipton. 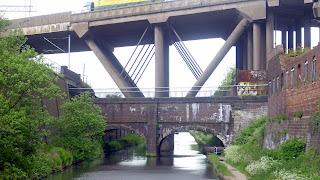 We very nearly made it, but a bunch of teenage lads saw us as we approached the railway bridge half a mile short of the museum entrance. They scuttled off into the woods to find ammo, and then emerged onto the bridge ready to launch an assault. Time for urban cruising mode: so Mr Truth disembarked armed with his camera and walked on ahead. In the event, God smiled on us in the form of a massive downpour of biblical proportions, which appeared out on nowhere. I simply hung back and let the water do its work. The would be attackers quickly realised that in addition to being caught on candid camera, they were getting soaked to the skin and melted away.
After a 12 hour day and over 30 locks we decided to pass on our usual pilgrimage to Mad O'Rourkes and instead sampled the delights of the nearby Chinese takeaway, washed down with a couple of bottle of Stella watching Sliver. A good end to a varied but tiring day.
Posted by Andy Tidy at 7:00 am