Dimmingsdale Lock to Calf Heath
Monday 25th May 2009
9 Miles
3 Locks
4 Hours
Dimmingsdale Lock is one of my favourite moorings, away from the towpath and accessible only across the lock. Whilst we shared the mooring with Eliza Rose, she was up and away very early and we barely noticed her passing and slumbered on till gone 10.00am. 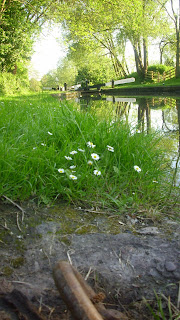 Hovever, it was a veritable paddys market going up the cut. There had been a boating meeting at Bratch over the weekend and we were teated to a parade of craft, incliding a steam powered launch, a Stewart and Allen tug and a working pair, Aquarius and Ilford. This latter pair were partially loaded with wood for next winter, sourced from the Shugborough Estate. It was really good to see classic working boats loaded down, with Ilford being towed on a long line as far as the inlet above Dimmingdale Lock. Aquarius is a genuine 1935 working boat and the pair were making for their home berth at Stone. 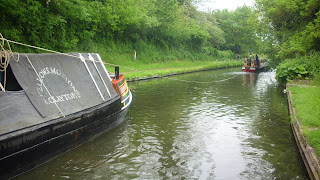 No sooner had they passed than a fishermen came jogging down the towpath clutching a six pound carp. This was clearly "our" fish - the one which got away last night! He had caught it between the pair and was hugely relieved to have got it to the towpath side before Ilford could cut the line. 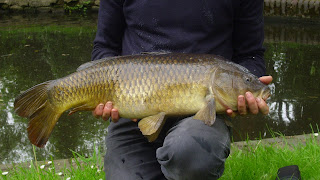 Jeff, usually so sure footed, slipped on the roof of the boat in Compton Lock and so nearly fell between the boat and the lock side. He crashed on the the roof but manged to cling onto the handrail without loosing the windlass, or breaking the ipod in his pocket. He returned to the stern with nothing damaged, save his ego. 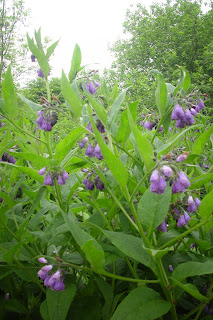 Belle has an occasional interest in identifying wild flowers in the hedgerows, and we have a book on board to help this process. Todays plant was, we think, Common Comfrey. It certainly looked like the illustration and it was rampant in the wet ground alongside the lock, which is its favoured habitat.
A great mini break with all four of us on board, a first for many months. Lets hope that this marks a watershed from which we can progress.
Posted by Andy Tidy at 7:00 am

Email ThisBlogThis!Share to TwitterShare to FacebookShare to Pinterest
Labels: Staffs and Worcester, Weekend and day trips