22 Miles
24 Locks
10 Hours
This is an account of our third annual trip to explore the BCN and its associated waterways, this time taking in the canals to the south of the city. The usual crew were assembled, being Mr Truth, Jeff (for part of the journey) and myself, Captain Ahab, with just four days to achieve two crossings of the Birmingham plateau. Our route was to be in via Wolverhampton, through central Birmingham and on out to Kingswood Junction, using the Northern Stratford Canal for the outbound leg and the Grand Union for the return. 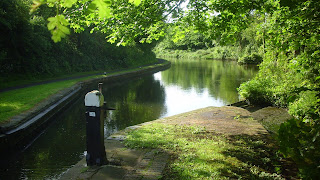 Prior engagements prevented a Friday evening departure, so we merely slept on Wand'ring Bark in the marina, setting off bright and early at 6.30am with the cold finding its way through thermal trousers and insulated gloves. We reached Autherley at 9.30am and were surprised to find Piston Broke moored up at the junction. 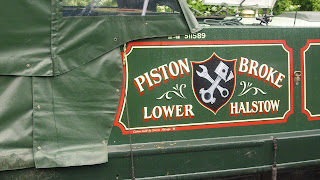 We found the entire Wolverhampton 21 set in our favour (courtesy of Piston Broke's descent in the rain on Friday?) and reached the top in a creditable two hours ten minutes, including a bacon buttie stop at the diner half way up. We passed a solitary narrowboat in their way down and were advised that they had moored on the offside in Wolverhampton, opposite the BW yard. They had no trouble but reported a night interrupted by incessant sirens - the very reason I have never used the spot myself. 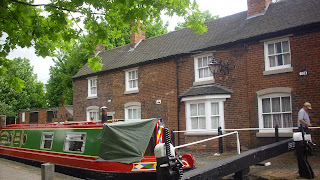 In spite of a very poor weather forecast, the rain held off for the locks and beyond as we traversed the no mans land between Wolverhampton and Tipton. All along the route old factories and works have been reduced to rubble, transforming the landscape and wiping away the last traces of the industry that used to line the route. 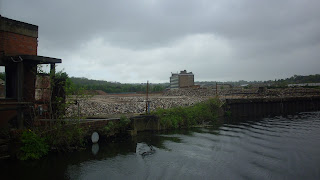 We made good time and decided to lunch is the Black Country Museum. Having run the meteorological gauntlet all morning, our luck finally ran out in Tipton. The heavens opened and we had to seek shelter under a bridge for half an hour or so while the downpour passed over. 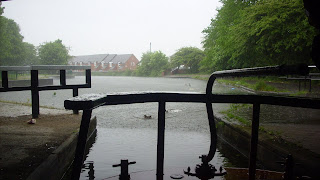 With most of the moorings taken, we made use of the ring in the wall next to the winding hole and watched all the hustle and bustle in the museum. We were particularly interested to see President being steamed up and, in due course, the lift bridge being raised to allow President and its ever faithful attendant, Kildaire, out for a run. This departure was a real bonus and it is safe to say that Wand'ring Bark had an Obama moment. By this I mean that she was touched by the President as she rotated out of her berth! 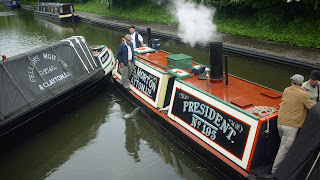 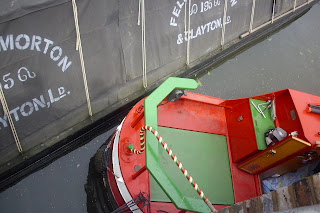 After some lunch we set off for central Birmingham following the course of the Old Main Line, which is a bit longer but much more interesting. Before long we found ourselves coming up behind President and Kildaire and so, to kill a bit of time, we stopped on Tividale Aqueduct to allow me to get some photos for my associated blog, Aqueducts of the UK. President and Kildaire pulled over at the top of Brades Locks to wind, letting is continue on our way. 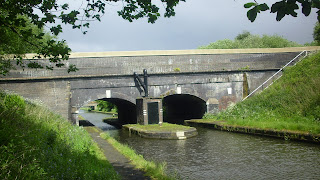 Weekends in the BCN often throws up snags, and this trip was no exception. As we approached Brasshouse Lane Bridge we spied two kids scrambling up onto the parapet but were relieved when we passed under without incident. The incident came as we exited - they hurled washing up liquid over the wall, most of which missed but some hit WB and Mr Truth. Better then stones I guess, and it did result in a very clean cockpit! A strange weapon of choice... Our would be attackers were clearly disappointed with the impact of their performance so hung around behind us till we cleared the lock beside the Engine Arm. They suddenly disappeared so, on reaching Smethwick Bottom Lock I strolled down to the towpath of the New Main Line - scaring the wits out of the lads who were trying to sneak round the side! They fled, I made a show of a chase ,and we escaped. Smethwick is a troubled area and its a shame to see the lovingly restored toll house at the top of the Smethwick flight reduced to a charred shell. 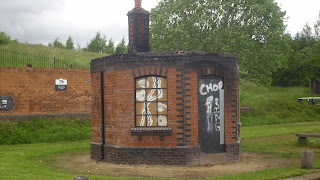 Given the rate of change in the area, we took in the Icknield Port Loop to view the stalled redevelopments. There are many BW barges moored in the loop alongside the remains of the factories which used to rise sheer out of the water. The BW yard remains a busy hub, but the rest of the island site sits in suspended animation, waiting for the return of better times. 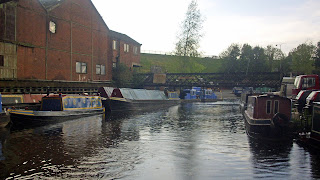 Rather than moor in Gas Street Basin, which can be very noisy on a Saturday night, we were offered a private mooring alongside the Symphony Court home of Nick and Vicky. Their hospitality was much appreciated extending to beers, showers and in the evening some excellent company at the Blue Mango Indian Restaurant. Not cheap at £30 per head, but excellent quality. There are a few public moorings just inside the southern entrance to Sherborne Wharf, a bit away from the noise of Broad Street and covered by the area's security cameras. This is a good spot for weekend layovers, but don't tie up to the pillars outside Bannatynes Health Club - they are insubstantial. 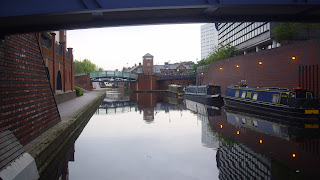 A real shame to see the toll house looking like that. It was covered in grafitti when we passed back in September, but at least it still had a roof.

Adam, whilst the amount of debris in the canal is much reduced, vandalism and general anti social behaviour in and around Smethwick seems to be on the increase. I always feel nervous about travelling through the area when the kids are not in school.