My good friend and boating companion, Mt Truth gave me a copy of this book for my birthday. He had been scouring the contents of a remainder bookshop and came across the item. Having read the first 30 pages he thought of me, and hurried back to buy a second copy.
A lovely thought and an excellent purchase. 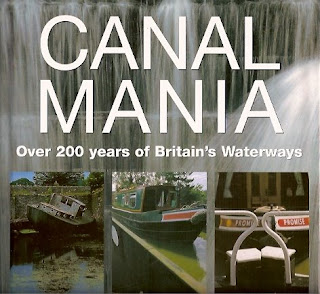 This book is far from new and was first published in 1993. However, given the timeless nature of its subject matter is has dated very little and remains as informative as the day it was first released. Anthony Burton hangs the book around the fact that 21 new canals were auhorised by Acts of Parliament in 1793 - the most ever passed in a single year. He reviews each canal and then uses this platform to explore the wider canal network. An interesting approach.

This list of waterways includes the good bad and the downright ugly, and therefore provides a good cross section of the canals, including well known names such as the Brecon and Abergavenny, Grand Junction, Stratford-upon-Avon and the Warwick and Birmingham. It also includes obscure navigations of which few traces remain, canals like the Nutbrook, Ulverston and the Caistor.
The book considers why some were successful and why others were unmitigated disasters, concluding the the one overriding feature of a successful canal was a demand to haul heavy bulk loads, usually coal.

But the book goes further than delivering a fairly heavyweight history lesson. It also includes archive photographs and a superb selection of waterways based colour images by Michael Taylor. These photos don't pretend to relate to the surrounding text, they operate independently and are truly magnificent.

Less impressive are the architectural drawings supplied by Peter White, former Chief Architect of British Waterways. The drawings in themselves are of a high quality but they add little to the overall book.

The only aspect of the book which has dated is the forward looking section at the end. Anthony isn't far off the mark, but it seems strange to read of the Rochdale and the Huddersfield Narrow as restoration projects with completion dates way in the uncertain future, and the Grantham Canal as a waterway of the cusp of reopening!

If you are hungry for a detailed perspective on the construction of the network we love, this is a book for you. It's cover price of £18.99 is a bit steep, but as Mr Truth demonstrated - reasonably priced copies are available. A must have item for any enthusiasts waterways library.
ISBN 0-7537-1366-7
Posted by Andy Tidy at 7:00 am

You've guessed it - I got one for my birthday too!
Jim

Jim
Its a chunky sort of read. Please do a review of it yourself. I will be interested to know what you think.