Atherstone to Rugby
27th July 2010
22 miles - 1 lock -7 hours
Unusually, Belle woke before me, at 6.00am whilst I snoozed on till 8.00. There she was sitting out the back in the warm morning sun connected to the internet by way of the much used dongle. WB had inadvertently moored at Atherstone's most popular chatting point for dog walkers and we overheard snippits of at least a dozen conversations. 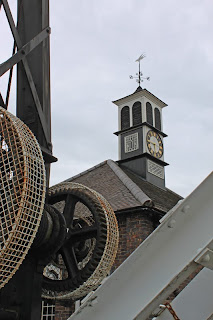 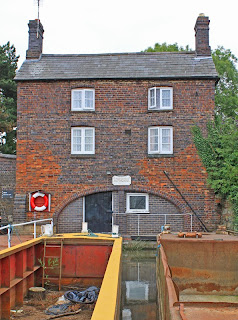 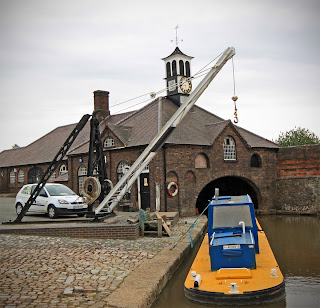 Hartshill Wharf
We were off by 9.00am, weaving our way through the now beautiful remains of the quarries that line the route. It's hard to imagine all the industry beside this once busy waterway. We paused for water at the ever enchanting Hartshill Wharf complete with workshops, antique cranes overseen by the clock tower.
The canal wound into Nuneaton, town of a thousand allotments which stretch on for nearly two miles and are clearly staging something of a renaissance. Then it was on to the understated Marston Junction, a simple brick archway and entrance to 23 lockless miles of canal to nowhere. We have never cruised the Ashby, an omission we need to put right in the near future. The area is also rife with abandoned arms with names like Griff, Arbury and Newdigate - all offering scope for land based exploration one of these days. 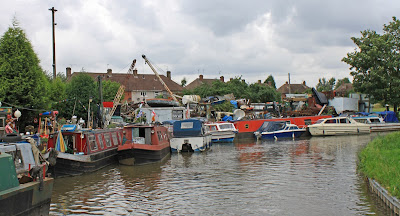 Charity Dock
Perhaps the jewel in this silvery crown is Charity Dock, a most amazing pile of old boating bric a brac which would do justice to an episode of Scrapheap Challenge.
We passed through Hawkesbury Junction / Sutton Stop, diving into The Greyhound to purchase a couple of pints of Marston Pedigree. This junction is something special with its 180 degree bend, graceful iron bridge and of course the pub. Again, another unexplored arm reaches 5 miles into Coventry - another destination yet to be travelled. 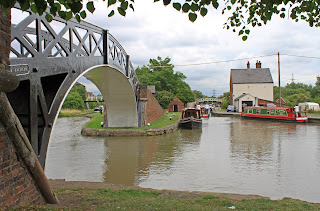 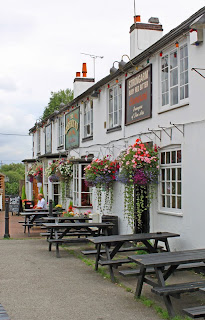 Hawkesbury Junction
We finally passed under the M6 and then started past a seemingly endless stream of bends cut off during the 1829 and 1834 straightenings, each marked by a Horsley Iron Works bridge picked out in black and white. The end result is a schizophrenic canal, sometimes a winding contour canal and then at others a cut and fill waterway to  rival the Shoppie
.
All the way the seven carriage Pendelinos kept us company, sighing past at speed on their welded steel rails, rushing workers between Birmingham and London and offering tantalising glimpses of the waterway from time to time. 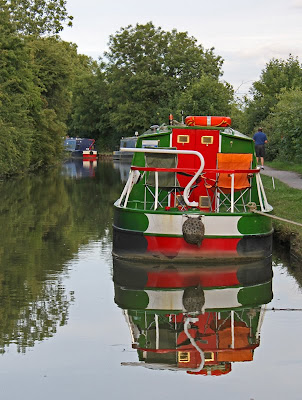 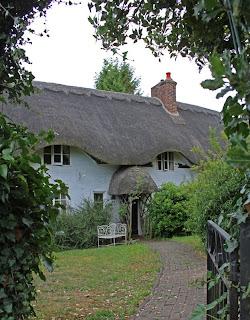 Newbold on Avon
We moored up just beyond Newbold Tunnel, the only one we would pass through on our trip. Newbold on Avon looks like it should offer some interesting photographic opportunities but sadly it was little more that an outskirt of Rugby with two pubs (one closed for renovation) a general store, a hairdresser and a post office. Sadly, I couldn't find the old tunnel, which may have been buried beneath a new housing estate.
Posted by Andy Tidy at 6:00 am

We found one end of the old tunnel a couple of years ago. As I remember, it's in the churchyard, and quite hard to spot.

The old tunnel is just off the churchyard on the right and took us a while to spot too. It is all bricked up for safety reasons but has a hole through which we took a photo of the interior still intact.

The southern portal of the old tunnel can be found by walking past the two pubs, on the old canal line, turn right up the hill, cross the road, down a footpath (next to the church, I think, Long time since I passed this way) into the field the bricked up arch is then on the right.

You can see something of it from the chuchyard.

Thanks for all your guidance on finding the tunel portal. I should have tried harder! Next time I will go to the churchyard.