Gailey to Kings Bromley
25th July 2010
21 miles - 12 locks - 9 hours
A perfect first day confronted us as we opened the rear doors with a clear blue sky reflected in a mirror smooth canal. 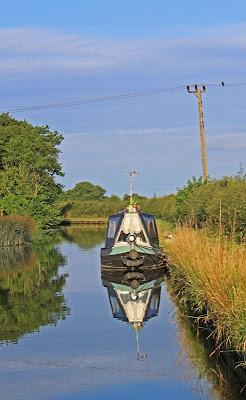 Mirror calm at Boggs Lock
The morning followed in a similar manner, with almost no boats to pass, just the regular rhythm of locks down to Penkridge. Suddenly, all hell broke loose and everyone was on the cut. Boats were going here and there - we even had to do three emergency stops in bridgeholes are the bows of an oncoming craft appeared unexpectedly. 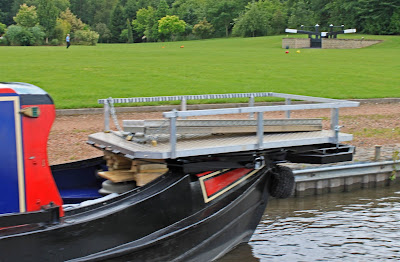 Stafford Helipad
I am alway on the look out for interesting contraptions on boats and was delighted to find what appeared to be a helicopter landing pad attached to the front of a craft at the Stafford Boat Club. It was well made but far bigger that the bows it sat on and overhung at the front. I cant see this idea catching on!
But the canal was too tame for Penkridgians, who were hosting a big dirt racing event which cast noise and acrid exhaust over the canal and ensured that no moorers lingered the vicinity. It was no better at Shugbrough where Jules Holland was performing with Alison Moyet (remember her?) and the towpath was lined with boaters out to bag a free concert. I can't say I blame them and may do the same thing another time. 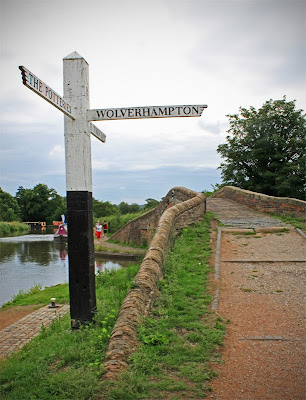 Great Haywood Junction
I think this was a record first day, passing through Rugely and finally stopping just short of Kings Bromley Wharf. We moored on a reedy stretch but the day had one last twist to throw at us. Just as we were settling down to bed the canal released the most enormous belch of gas which burst up beneath our base plate and then bubbled round the sides. I have never witnessed anything like it before - very scary on a still and inky black night. 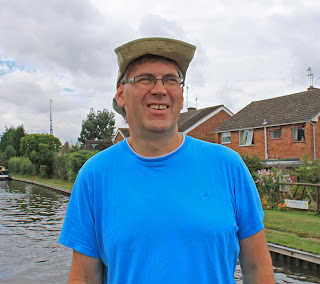 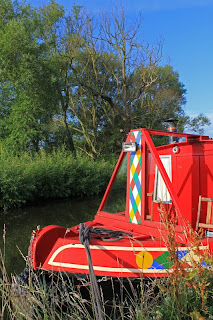 The Captan and Wand'ring Bark
Posted by Andy Tidy at 6:00 am