Pride comes before a fall

The occasion of the meeting of the crews of Northern Pride and Wand'ring Bark in Abingdon deserves a post of its own. 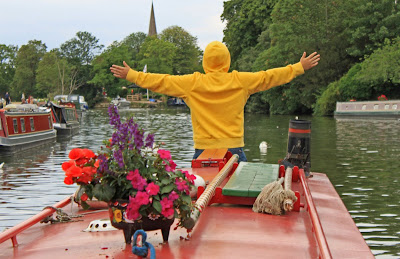 We had been watching Sandra and Barry's steady progress down the Oxford Canal with interest, knowing that we would be following in their footsteps at the start of the summer holidays. This sedate progress slowed to a glacial pace at one point and we realised that if they took a look at the Upper Thames to Lechlade our paths might just cross as we thundered round the Thames ring at a rate of knots.

A quick look at Nick's Canal Planer confirmed that our paths should cross at Abingdon - if everything went according to plan. As with most boat trips, the itinerary slipped and slid, but in the end the plan came together and we spied a windmilling pair of boaters just below Abingdon Lock.

We had been offered an "evening of fun card games" which was accepted but only after we gained an assurance that it wouldn't involve the removal of any clothing! The game in mind was Six handed rummy, or better known as "Barry's Game" all lubricated with copious quantities of
his infamous home brew and distilling enterprise. Mention of Barry's home made alcohol is enough to suggest how this evening was going to turn out. 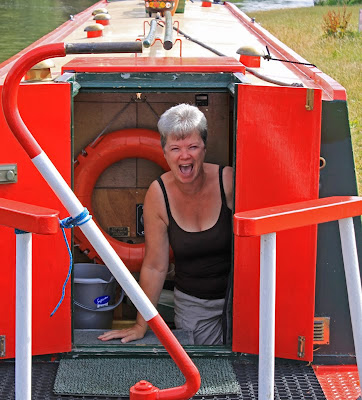 I am going to try and record an outline of the rules of six handed rummy, not because I want you  to play it but to record it for future reference:
When you are winning it is clear that the game is all about skill but when you lose it is equally apparent that it is mostly a matter of chance! 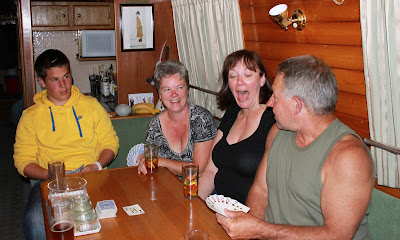 Belle finally "gets" it

Barry's home brew flowed and flowed and the noise level rose in parallel. Jeff just sat there and played and drank and drank and played, happily accepting all that Barry sloshed into his glass, as would any self respecting teenager. 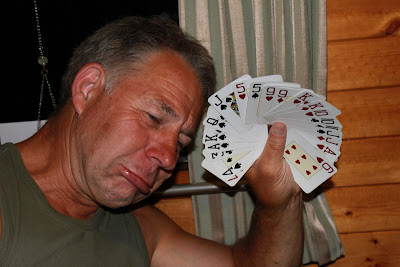 For some reason Belle and I fell into identifying a song for every occasion or word, and this strange game gained popular appeal as the evening wore on. Did I win the game? Well, very nearly and I should have - but I was robbed! I bought in the last round of the last game which you should never ever do, and as a result gave the game to our hosts. Not that I am competitive or anything!

It's amazing what fun you can have with some cards, some booze and some great friends! We stumbled back to WB at midnight and I would like to offer my heartfelt apologies to the boaters round us that night.

Barry and Sandra, thanks for a truly memorable evening and sorry we drank the boat dry!
Posted by Andy Tidy at 6:00 am

What a great blog Andy, you really have a way wit words, it was a fabulous night with most enjoyable company! Shame about the cards - well done for putting in the rules of the game - Barry says good luck to anyone following them and he'll take questions if anyone has any when they try it out!

Guess what.... we played six handed rummy last night and in the final hand I was dealt three two's and a jack - which was too many to greate a valid hand.... so I had to buy. This proves that for every rule there is an exception!