On to the New Junction Canal

Here we are again, playing catch up with the blog posts having spent four days on the move. 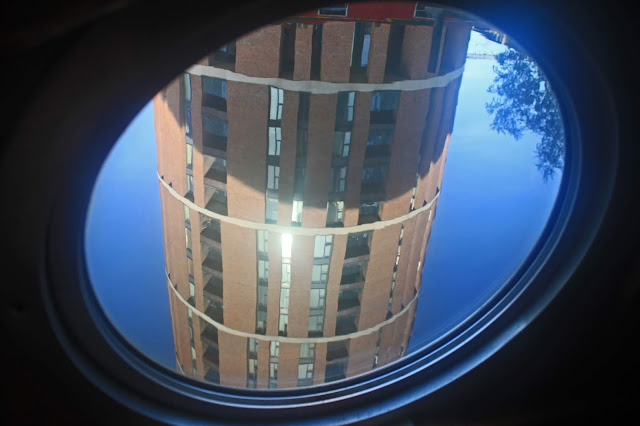 We left a very cosmopolitan Leeds Waterfront behind us and immediately were out onto the Aire and Calder Navigation with its broad waterways and mechanised locks. This is a waterway on a completely different scale and it wasn't long ago that it was used commercially to bring oil to a depot in Leeds. The storage tanks remain in service but the tankers are long gone. 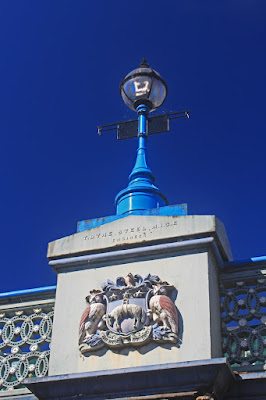 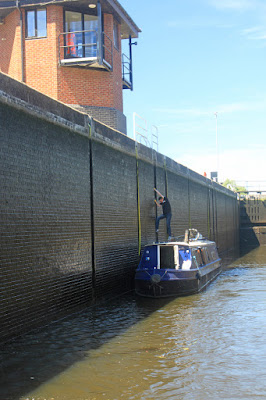 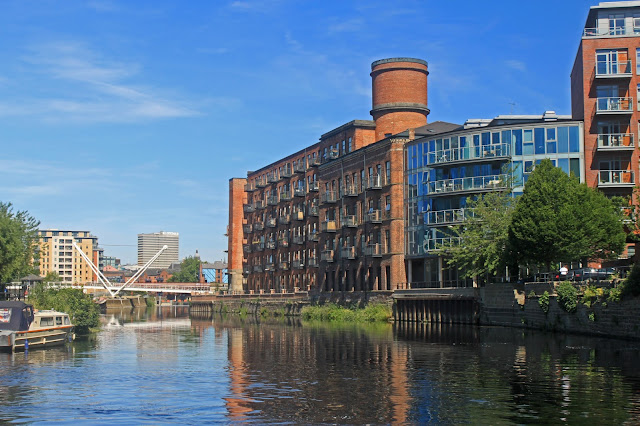 The navigation also carried huge quantities of coal and the entire landscape is sculpted by reclaimed spoil tips and the canal fringes dotted with silted wharfs and reedy inlets.
As with most of these northern canals, we pretty much had the place to ourselves all the way through to Castleford, our destination for Monday night. Here we restocked at a supermarket but the endless days of wall to wall sunshine make dragging a shopping trolley anything but a pleasure. 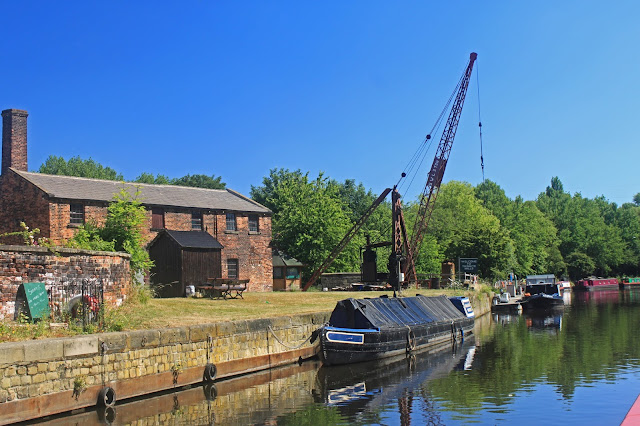 Tuesday was a day to clock off the miles, nearly 18 all told which is a long day for us. We refilled the diesel tank at Supreme Marine, putting in 120 litres which was the first refill since the outskirts of Liverpool three weeks ago. The diesel was pricey but we really needed it before the Trent so the took the cost on the chin. 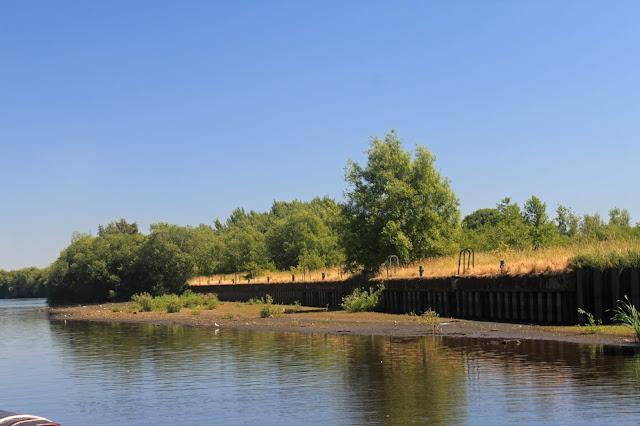 Silting on the Aire and Calder

If the navigation to Leeds was big, the waterway now reaches incredible proportions, built to accommodate the trains of Tom Puddings which moved coal from the many pits to Castleford Power Station and Goole. Today the power station unloading machinery stands idle and a forgotten relic, covering beneath the huge cooling towers. 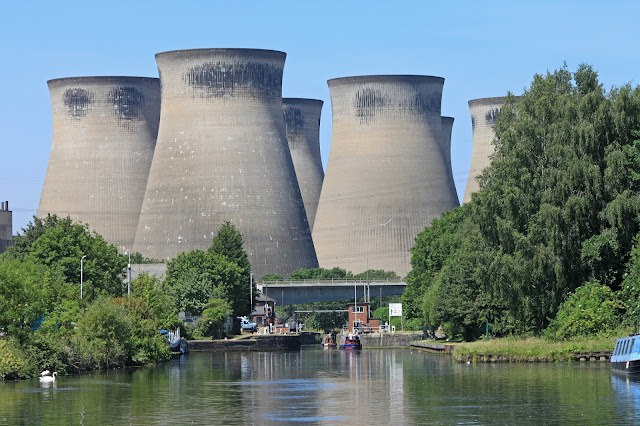 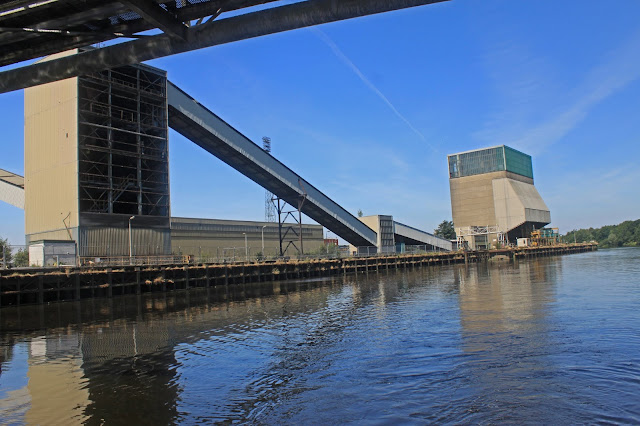 Not far beyond Knottingley stands the site of Kellingley Colliery, the last UK deep pit to close. Last time we came past, maybe 5 or 6 years ago the colliery was still working but today the pit head gear stands forlornly among the heaps of spoil, which are gradually being landscaped. One odd twist is that the site of the colliery is now home to an enormous solar array, which must be kicking a lot of power into the grid on sunny days like these. Old school meets green renewables. 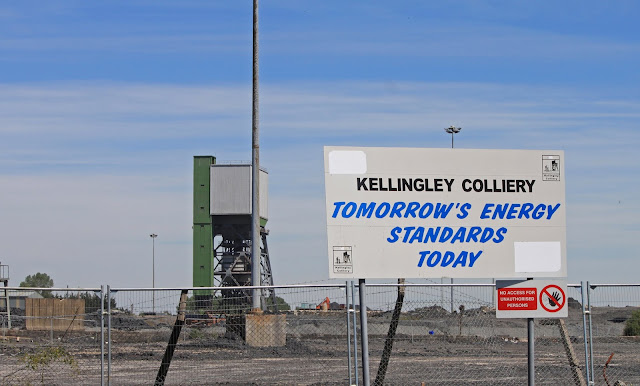 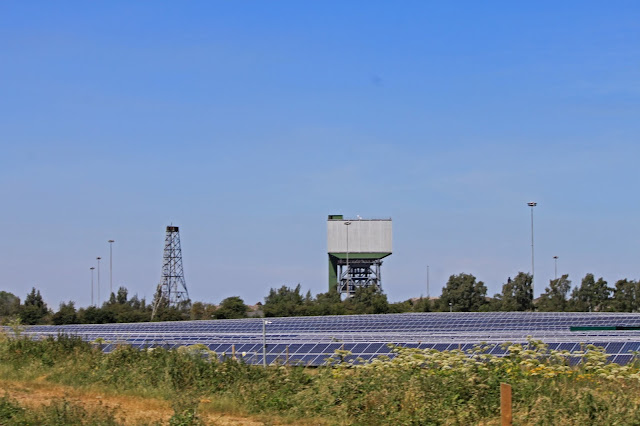 The past and the future in the same image

Then it is out onto the flat lands where the ultra wide canals stretch on for mile after mile without the slightest deviation. Fast and effective but just a tad boring! 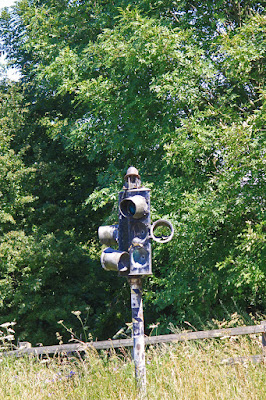 By now we are in the land on mega locks where even the short version of the chambers would hold 20 narrowboats and is used to their maximum extent the number would rise to 100 or more. Our little pair look a bit absurd bobbing around in a cavernous chamber. 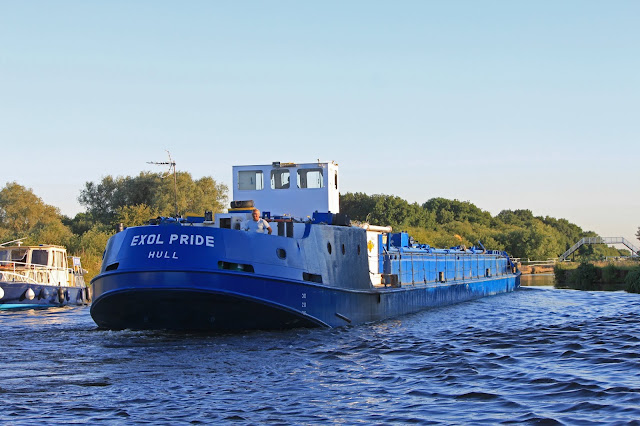 Sharing the space with the big boys at Sykehouse Junction

We moored in a patch of shade at Skyehouse Junction and before long a huge tanker bound for Rotherham rumbled its way past, built to fit the dimension of the locks. Its great to see real life commercial activity on the South Yourkshire Waterways, but I suspect its keel wasn't far off  the canal bed. Its passing stirred up the silt leaving a pungent aroma in its wake.
Posted by Andy Tidy at 5:05 pm

Email ThisBlogThis!Share to TwitterShare to FacebookShare to Pinterest
Labels: Aire and Calder