Unto the ends of the earth (Keadby)

By the time you read this post we should (hopefully) have completed the first third of our tideway passage and be safely tucked away in Stockwith Basin, waiting for the next tide to push us up to Torksey. But more about that another day. 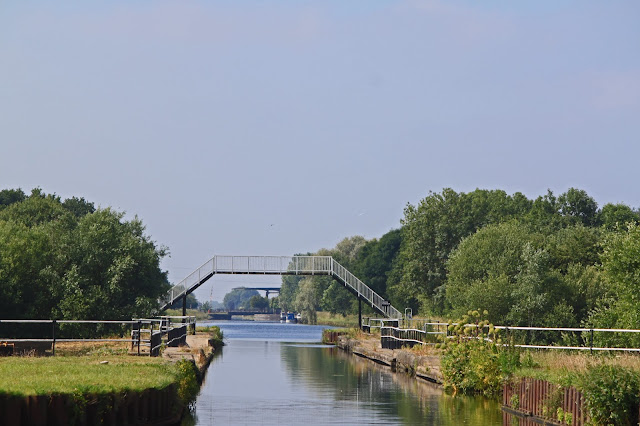 The New Junction Canal may only be about five miles long but don't assume you will crack through it in an hour.

This is one of the last UK canals to be built and it is fitting that (MSC apart) it is one of the last to carry regular commercial traffic. The big boys have a land based driver who sprints from bridge to bridge preparing the way for the tanker, but for the rest of us progress is constantly interrupted by lift /swing bridges or the massive Sykehouse Lock. 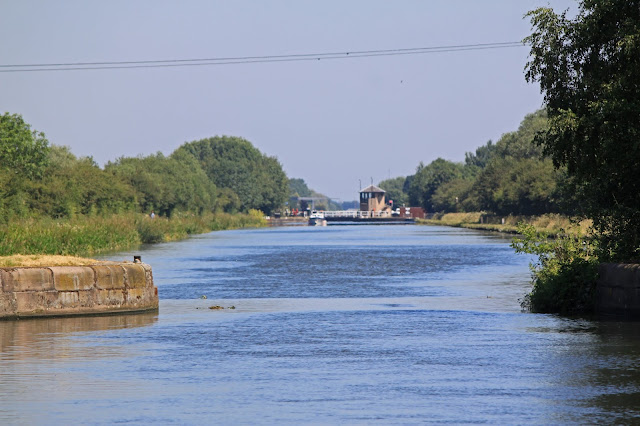 The canal isn't without its charm and the moveable bridges are among the largest we have come across. The lock sits midway along the canal and in an ideal world you would have bike to commute from end to end. The whole shindig is released by a key in the middle, which lets you swing a bridge out of the way. Then its up and down to the control podiums at both ends. I hate to think how much water the lock contains. 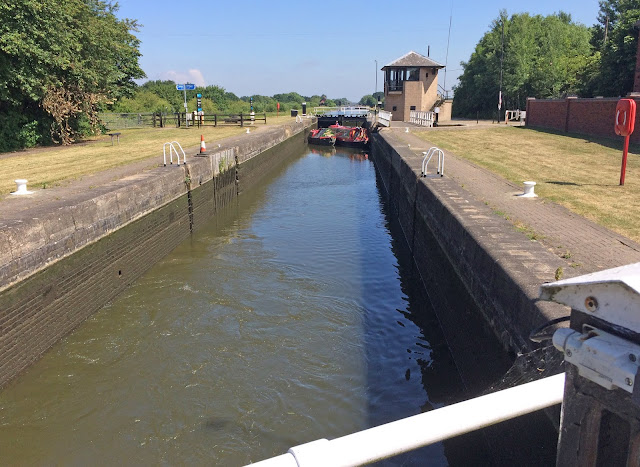 The canal finishes with a flourish in the form of the Don Aqueduct. Here an iron trough was built about 100 years ago, with side low enough to spill surplus water into the Don just below. Its sides are also open to allow flood water to pass over the canal, held out of the canal by guillotine gates. This arrangement is, to the best of my knowledge, unique. 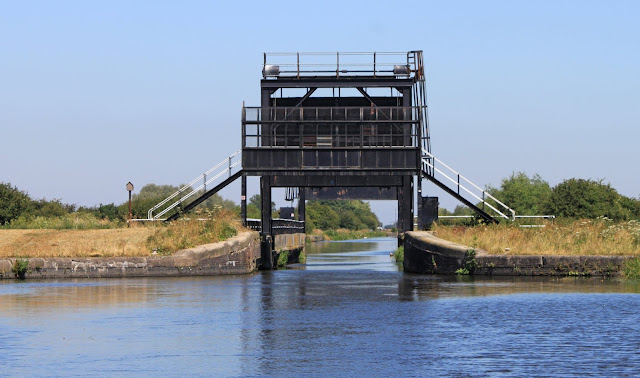 Then it is hard left into the Stainforth and Keadby Canal, and the link into the River Trent. Bramwith Lock can be used  in long format, but for most boats the short end section is enough, dropping you down to the pound into Thorn.

This is a quiet waterway and you rarely see many boats. Thorn is the main event of the canal, sporting a number of boatyards and a useful town centre and Sainsburys. The Thorn Lock is short and prevents full length boats using this sheltered inland route. They have to face the perils of Trent Falls. The moorings at the service point were all taken so we stopped just beyond the temperamental footbridge. I remember this bridge from last time but it didn't stop me struggling to get the barrier gates in place and release the brakes on the swivel motor. 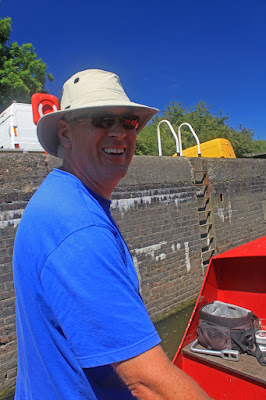 Its grim up north

Thursday was spent covering the final 12 miles to Keadby. This really is a waterway to the end of the world. You chug along for mile after mile with just the odd swing bridge to negotiate. The busy railway line is alongside the canal, its drivers offering cheery waves to the occasional boater. Most unusually, there are a number of manned level crossings beside canal bridges, where boaters are able to pass the time of day with the lonely holders of the railway posts. 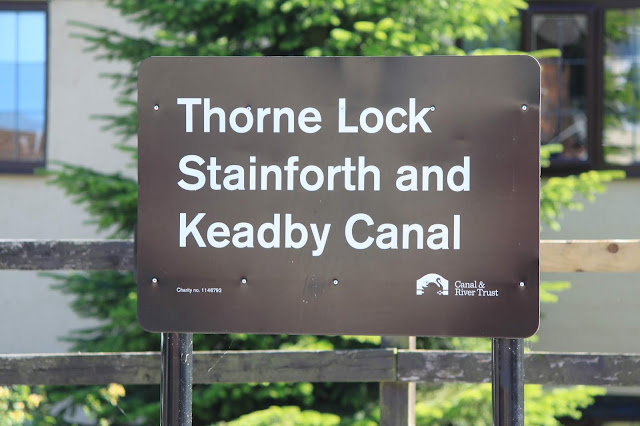 This as also an area of windmills, their slender masts towering over the fields and their sails casting twirling shadows on the crops beneath. We saw these wind farms being built last time we were in the area and now they are such a fixture.

The end of the canal includes the unusual Vazon sliding railway bridge where the rail deck half swivels and half slides out of the way - all controlled by an adjacent signal box. 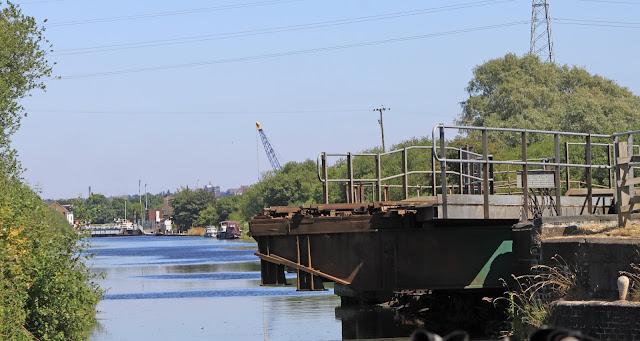 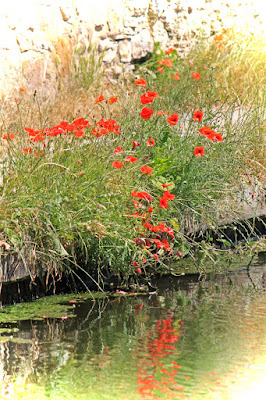 No sooner were we through the bridge than the river lock opened and there were the Balmers and Waterways Routes coming up. We had been tracking each others progress so this came as no surprise, it was just a shame not to get a photo of them coming in from the river. 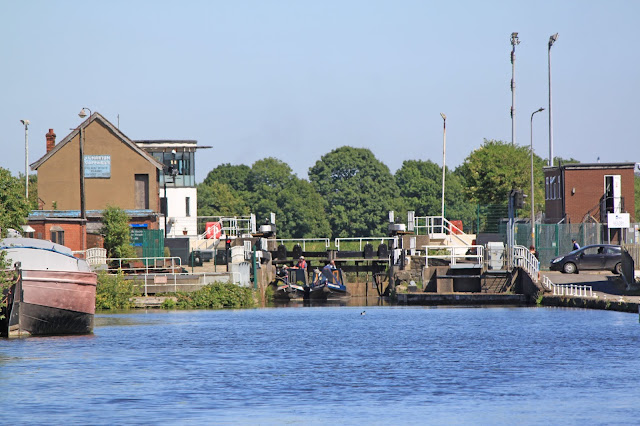 So here we sit, at the end of the world with 44 miles of tideway between us and the safety of Cromwell Lock at Newark. I have to admit to a few concerns as our maximum speed over still flat water is a mere 3mph. We are therefore taking the tideway in three jumps, overnighting in Stockwith (13 miles), Torksey (15 miles) and then Cromwell / Newark (16 miles). 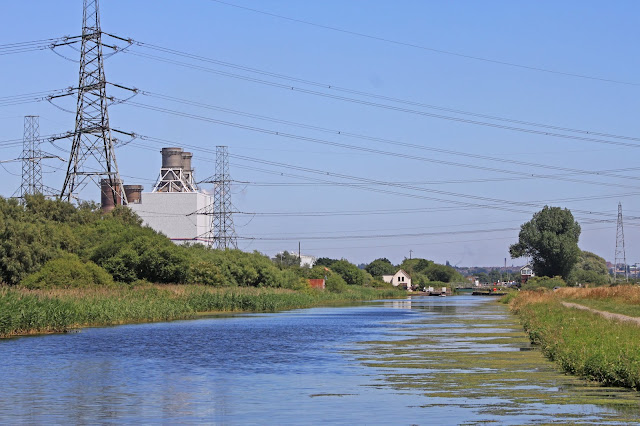 The plan is to join the flood tide at 7.45am on Friday and reach Stockwith on the top of the tide just over two hours later. We have to trust the experience of the lock keepers because there really isnt a fall back option on this first leg, other than a return to Keadby.

Did I say that I would never take the butty on the tideway?