Arms of Gas St Basin, Birmingham
January 2012
Other posts in this series:
1. Gas Street map and the Northern Arm (this post)
2. Southern arm across Gas St
3. Old Wharf and surrounds
The days between Christmas and New Year offer a rare period when the demands of work lighten up a bit - enough to indulge to indulge in that rare luxury of a lunch hour. And how better to spend it than a mooch round Gas St Basin, which is about half a mile from my office?

A recent walk along Broad Street saw me glancing down Gas Street and spotting an odd rise in the pavements - often a tell tale sign of an old canal. 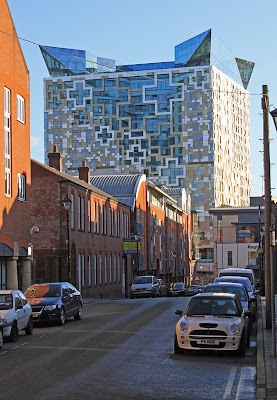 Road humps in Gas St
A bit of research in The Other Sixty Miles and the IWA's Blue Book suggested that this could be one of the two short arms which left the basin either side of the Worcester Bar stop lock. 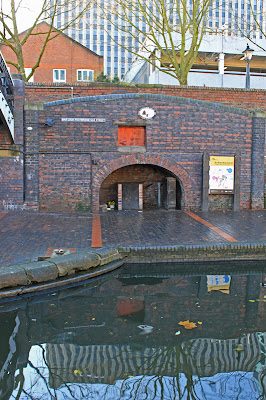 Northern arm entrance at Gas St
These arms passed beneath Gas St, across a block and then under Berkley St before stopping just short of Granville St. The entrance to the northern arm is beautifully preserved and if you have ever entered the basin near the Tap and Spile you will have stood on top of the little bridge an walked down its flanks. It is now all bricked up and the resulting recess houses a water tap. 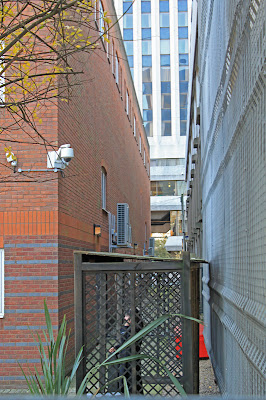 Northern arm between Gas St and Berkley St
Sadly that's all there is to this arm, the road has been lowered and whilst the route of the canal is marked by a narrow gap through the new buildings, you wouldn't know that this was a canal route just by looking at it. 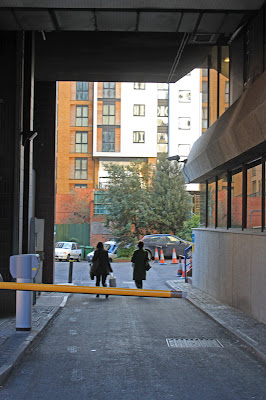 End of the northern arm
Posted by Andy Tidy at 6:00 am