Snatched Moments
1 July 2009
Its been a difficult week in Ahab land. After the highs of the graduation the yang of life reared its ugly head in an attempt to balance out the ying which preceded it.
The waters of our lives have been far from tranquil and the Capt sought out some solace on the cut. I snatched a days fishing with the ever dependable friendship of Mr Truth. We never moved from the marina but in the heat of the day few fish were biting. The monstrous old carp patrolled the lagoon, basking in the sunshine, but were totally disinterested in the variety of tempting morsels we offered them. 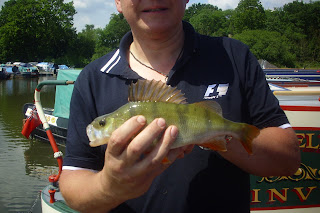 In the end I hauled in a couple of decent perch and a solitary gudgeon whilst Mr Truth landed five fish, including his largest bream and largest perch.

Whilst I may have lost the contest, I "blooded" my new rod and reel combo and put my failure down to the fact that I fell asleep in the saloon for an hour in the middle of the day!


I always find the water a place of refreshment, even if WB remains firmly tied to the jetty and the engine is left unturned.
Posted by Andy Tidy at 7:00 am