Calf Heath Boatyard
4 July 2009
Today represented possibly one of my shortest cruises, shorter even then the 400 yard trip at the end of the South Pennine Ring trip - which was just long enough to see the heater hoses fail is a plume of steam. 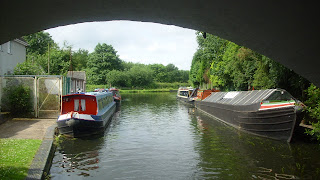 No, today's trip was just around the corner from our moorings at Calf Heath Marina and up the single operable lock of the Hatherton Canal. This antique structure lifts boats about 8 feet into a fairly extensive pool at the end of which is Phil Jones' boatyard. 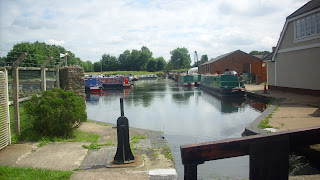 Any working boatyard is interesting but Phil's is particularly so, partly due to its rarely visited location and partly due to his unusual method of extracting boats from the water.
Sure, he has the obligatory antique crane, but rather than use a dry dock, the boatyard has made use of the second lock on the canal and cut out the side to create a shelf with stanking planks at the bottom end. To get a boat out of the water it is run into the lock, the over sized recycled bottom gated closed and the lock filled from the copious flow which descends from the Cannock sewage works. The top gates are inoperable but that doesn't matter. The boat is ferried across to the right and then dropped down onto a submerged cradle. The Stanking planks plus a polythene membrane are removed and hey presto - Phil hauls the boat out backwards with the aid of a forklift truck. Neat, safe and very environmentally sound. 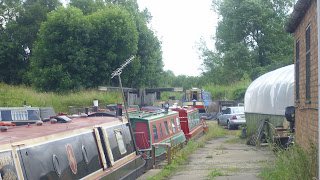 And before you throw your hand up in horror at the idea of the desecration of a lock on a restoration project, the boat removal system was created in the early 1960's and if this canal is ever to be returned to navigation it will need to pass under the Mile Straight and the M6, both of which will result in the canal level being reduced and the lock cut out anyway.

So its bye bye to Wand'ring bark for a week whist she has her bottom blacked, her anodes replaced and her stern gear repacked.
Posted by Andy Tidy at 7:00 am

Email ThisBlogThis!Share to TwitterShare to FacebookShare to Pinterest
Labels: Lichfield and Hatherton Canal, Maintenance and carpentry