The forecast was bad and in the event the weather lived down to our expectations.
The rain arrived overnight, drumming on the cabin roof and only easing as we departed from Tibberton at 9.00am. The BBC forecast said light rain till three, turning heavy so the planned ascent of the Tardebigge flight in the afternoon looked unlikely. 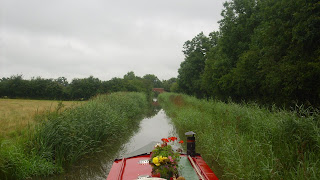 The reach from Tibberton to Hanbury Wharf is typified by reedy margins, with their green stalks waving in the breeze a full two metres above the water line. The scenery is one of rolling fields with the open aspect interrupted by the 236 yard Dunhampstead Tunnel. Next up it was the bustling Hanbury Wharf, one of the homes of the New and Used Boat Co. The most notable thing about the approach to Hanbury is the quality of the residential boats. Whilst by no means new, they are all well looked after and maintainedto a high standard. What is more, most hasve well ordered sheds on the bank and lovingly tended garden / patio areas. I am puzzled as to how this uniform commitment to quality has been achieved. If I were to live on a boat, I would choose somewhere like this as a base.
Hanbury is also the site of the other end of the Droitwich Junction Canal restoration project ,and from there it's a short hop to the six Astwood Locks, by which time the drizzle had developed into a steady downpour. No amount of rain could dampen my enthusiasm for the lock keepers garden, which occupies every square inch of soil in the vicinity of the lock, and was truly a sight to behold.

The bridges in this area are in a curious mix of repair. Some have been carefully restored to their former glory, whilst others , encased in concrete, are swathed in netting in an attempt to hold them together. 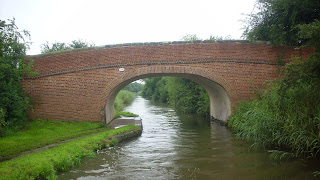 The rain stepped up another gear as we filled with water by bridge 42, just below Black Prince's Stoke Prior base, and continued to soak us through till we gave up in disgust at 1.30pm, moored opposite the Queens Head just below Tardebigge Bottom Lock.
The afternoon was spent drying off and playing a new version of Risk, the board game. I dominated the world at my first attempt, but was wiped from the face of the planet in the second game - would be dictators take note.
A short fishing competition was held with Jeff in the evening, which proved to be a victory of age over enthusiasm, both in terms of numbers caught and the largest fish of the day - a good sized, but very slimy, bream.
Posted by Andy Tidy at 7:00 am