Belle has a policy, which verges on a legal agreement, which obviates her from all lock duties in times of, what she deems, unacceptable rain. Suddenly on days such as this Wand'ring Bark's ownership mysteriously, and quite temporarily, ceases to be "our boat" and becomes "your boat".
As a result I sometimes find myself adopting the role of a single handed boater, with the benefit of a provider of "tea and a little something". Better than no crew at all I guess.

I adopted wet weather, single handed mode which basically entails taking my time. At first it was like paddy's market, with boats milling around all over the place but it soon quietened off and after Penkridge I had the canal pretty much to myself (note thew absence of we).

An amazing thing about canal travel is how a familiar journey can offer up new and unexpected events every time. After umpteen trips along the eastern end of the Staffs and Worcester you would think I had seen it all, but no. Today's journey co-incided with one of the largest fishing matches in the angling calendar. I heard mumblings about "the great fishing match" from the few boaters I passed and the first long carp rod was spied just below Otherton Lock, its owner surrounded by a huge pile of kit. His hook was, as ever, carefully placed six inches from the offside bank. Why to fishermen suppose that all the fish on the canal live in that one foot corridor of shallow water at the far side from the towpath?

From this point on the fishermen were stationed like stoic sentinels every 50 yards as far as the eye could see, all shrouded in camouflaged waterproofs. In fact, they went far beyond where the eye could see. All the way to Acton Trussell, four miles distant.

But I am jumping ahead. As I passed Otherton Boat Haven a narrowboat was attempting to come alongside the pump out tractor and I witnesses, in painful slow motion, the lady at the front dither about her next move - jump ashore or climb back aboard. In the end she never did reach a decision and her fate was placed in the hands of mother gravity who decreed, as is her habit, that this hapless individual should have an early bath. The nearby fishermen creased up in rather unkind laughter, but quickly recovered a visage of dour hostility as my blast of reverse gear churned up their swims and my hull threatened their preposterous rods. The poor lady couldn't climb out and found herself stuck between her boat and the bank. After quite a bit of calling from yours truly some boaters from the marina emerged and bodily hauled her out, flapping like a giant seal on the towpath. Maybe a fisherman should have stuck a hook in her and claimed the catch of the day prize. I know it was a funny scene, and I did have my camera to hand. But I couldn't, in good conscience, take advantage of this poor ladies plight. Sorry.

Next up it was Deptmore Lock, infamous for its tumbledown cottage and occupied by an old lady and her disabled husband. This house has no running water, no electricity and no vehicular access and now, alas, no old lady and her husband. They have gone and have been replaced by a small army of builders who are stripping the place out for a full refurb. Progress I guess. 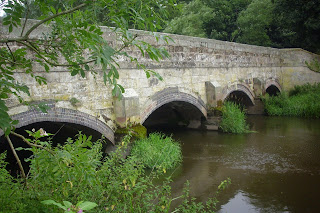 And so on the Great Haywood, collecting a photo of Brindley's Sow Aqueduct as we passed.

I called into the new marina at Great Haywood, in the hope of procuring some diesel and establishing an approved tenure for our car, which I had fly parked on the site the night before. However, by 4.30pm everyone had gone so we moored just south of Great Haywood junction and recce'd possible parking sites on the folding bike. During this excursion I discovered the rather excellent farm shop next to the bridge who, as well as offering a broad range of unusual foods, also offer parking at £2 per night. This seemed very convenient and a whole lot better than dicing with the traffic wardens, who maintain a vigilant watch over the many double yellow lines in the area. 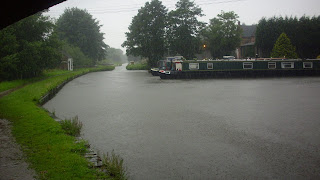 During my final 400 yard dash back to the boat the heavens let lose a final and incredibly heavy downpour, soaking me to the skin in spite of my waterproof outfit.
Posted by Andy Tidy at 7:00 am