Recycling lorry in the Staffs and Worcester Canal

Recycling lorry in the Staffs and Worcester Canal
30th July 2009
I have just returned from a rather damp two weeks afloat (loads of blog material) but felt compelled to do a quick post tonight containing a couple of photos of a current obstruction on the Staffs and Worcs Canal at Acton Trussell. 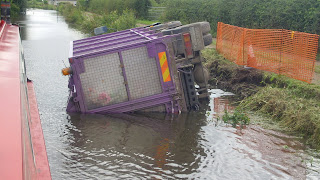 I rounded a bend and was amazed to see the back end of a lorry sticking out of the canal.
The towpath was all a twitter with news of the event. It seems that it happened on Monday 27th but the driver of said vehicle remains something of a mystery man, who appears to have done a runner! Speculation is that either he was on the phone and wasnt paying attention, or that an unqualified driver was "having a go" on the private land. 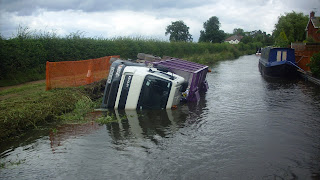 Whatever the truth is, someone is going to face a very large recovery bill. Today (Thursday 30th) they were busy laying a temporary track in the adjoining field and tomorrow a huge crane will be brought into to position to lift it out over the hedge.
Sounds expensive to me!
Posted by Andy Tidy at 10:14 pm

Oh beggar I thought I had got away with it ;-)