Another peaceful night at the Black Country Museum, but slightly unsettled by the king sized Donner Kebab consumed last night!

I was up and about by 7.00am and, with nothing stopping me, slipped the moorings at 8.00am and was out on the Old Main Line as it wanders through the back end of Tipton in a series of Lilly fringed lagoons. Boating in these conditions is a delight. I had the canal completely to myself, the sun was shining, I had a big mug of tea at my elbow and deep clear water flowed smoothly beneath my baseplate. This area teems with fish and feels more like a river than the industrial canal it once was. 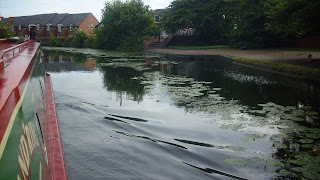 Tipton Riveriera
I spied two hire boats who had braved the "outer world" last night, an ABC boat just south of the BCM, and a Shakespere Classic Line boat north of the Coseley Tunnel. I would never dream of mooring overnight in such an exposed spot on my own, but I guess my caution is borne of long experience. Ignorance is sometimes bliss.

The canal continued deep and clear all the way to Wolverhampton, picked clean of litter by the young offender community action hit squad. Jeff finally made an appearance just before the junction with the Wyrley and Essington to attend to his promised lock duties.

For once, the locks were all set in our favour and Jeff used the folding bike to wheel ahead six at a time and, within an hour, we found ourselves at the incinerator and munching on bacon butties from the Crown Cafe, now a regular feature of our morning ascents and descents on the Wolverhampton 21. 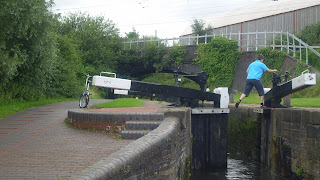 Lockwheelers leap
Along the way I met Jeff Anderson, canal enthusiast and part time lock assistant / boat mover. If you ever find yourself in Wolverhampton or the Black Country and in need of some help on the locks, Jeff's your man.
We made no attempt to rush, but amazingly we found ourselves emerging from Aldersley Junction a mere 2 hours 10 mins after we started down.The sun didn't last, no sooner had we reached Autherley Junction than the heavens opened and it poured solidly for the next two hours, all the way back to Calf Heath. 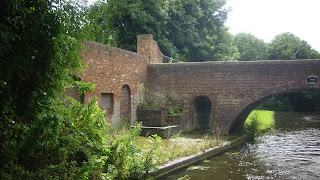 Aldersley Junction
Packing was, for once, a joy. This stop was only temporary, just long enough to send Jeff off on his way to camp on Saturday morning, see Tilly perform in her end of year concert, and then return for a few days on the Staffs and Worcester. We didn't even have to empty or turn off the fridge!
Posted by Andy Tidy at 7:00 am