Calf Heath to Greensforge
Saturday 18th July 2009
Staffs and Worcester Canal
16 Miles
16 Locks
8 Hours
The wind and rain howled across the marina all night, feeling more like November than summery July! However, morning heralded in a more broken sky but unusually I was unmotivated to make a start. I have had so much on my mind just lately that family issues just wont release their grip on me. I know things are bad by the tightness that has returned to my chest.
I finally stirred at 9.00am and, after a hearty breakfast, was on the move by 10.00am. Still blustery and fresh but at least no rain.
There was very little boat traffic today and we made good time along the summit pound, reaching Compton lock at 1.00pm. We paused at Limekiln Chandlers just below the lock, filling with diesel (67p per litre based on a 60/40 split) and finally decided to buy a lie flat hose which, I am assured, won't taint the water with the horrible plastic taste caused by the length of garden hose I have used for the last few years. 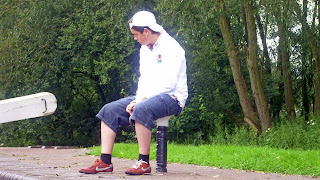 The assistant was really helpful but both I and Jeff found it almost impossible not to stare at his amazing ear rings. They were huge - maybe 3cm across around which his ear lobes had been stretched. But that wasn't all - the disc in the centre of this lobes was in the form of a convex lens which magnified the skin beneath. Very unusual - I hope he dosn't get a burned neck if the sun ever makes an appearance.
Whilst we were tending to the boats needs at the Chandler's, Belle went off in search of the shop marked on the map. It turned out that it was a really great little independent supermarket called "Daisy" which is well worth a visit, and stocked an exceptional range of quality meat, but only one line of rather inferior ground coffee - an essential element of any breakfast afloat. 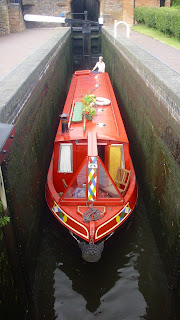 The weather brightened as the afternoon wore on, even justifying the donning of my new prescription sunglasses (two for the price of one at Specsavers) as we were assisted through Bratch by a very informative BW lock keeper, who even looked up the latest cricket score at Lords. 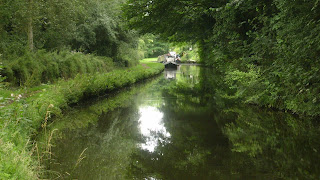 We finally moored up just below Greensforge Lock, settling down to a pile of pizza and three episodes of 24 - series 2. The new flyscreens were pressed into service for the first time and proved to be 100% effective against the little creatures of the night. 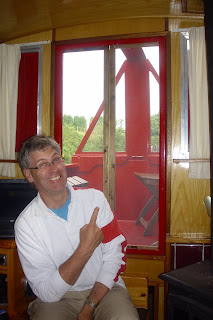