After 19 years in the Midlands we finally grasped the opportunity and paid a visit to Shugborough Hall, which was less than half a mile from our mooring.

The estate is reached across the medieval packhorse bridge, barely wide enough for a couple to stroll across arm in arm. With time on our hands we figured we may as well take in the entire Shugborough 'experience' which includes the gardens, house and Model Farm, all for the princely sum of £12 each (reduced by £6 for National Trust members). 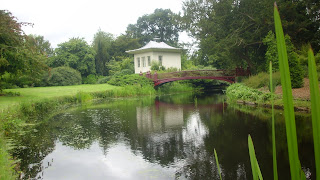 With rain threatening (again) we opted for the garden first, wandering around the Lady Walk as it meandered through woodland to the banks of the lakeified section of the Sow. The garden contains numerous follies which, whilst completely without purpose, add something of a magical charm to the place. There is no theme to the follies which range from Roman ruins to a Chinese Pergola and a Doric Temple. If you dont have time to see the house, the gardens are well worth the £3 entrance fee.

Next it was lunch at the Lady Walk Tea Rooms before a visit to the house itself. This is the ancestral seat of the late Lord Lichfield, which is impressive but on a relatively modest scale. I can take or leave stately homes but I was captivated by the 'family' end of the house which was and is actually used by the family. Within the ballroom where was a scale model of the Centurion, a ship which seems to have circumnavigated the globe and served as a platform to raid and pillage its owner to a great fortune. Behind every fortune there is normally something a bit murky! 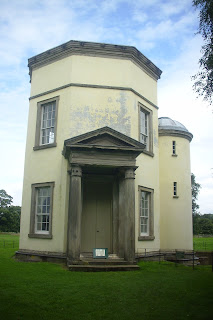 Upstairs we were particularly taken by the Royal Guest Room, which had been completely refurbished by the profits from the National Trust shop. Unusually, this wasn't in a state of 'faded glory' but instead had been reinstated very much as it would have been when it was actually used. Suddenly, instead of something unpleasant and musty it was vibrant and appealing, a better representation of the opulence the aristocracy aspired to achieve.

At a more accessible level, there was a fascinating collection of Lord Lichfield's photographs taken in the 1960's and 1970's, plus a doorway within with each family member has had their height recorded each term. We have something very similar in our kitchen at home grounding this rather remote family of the aristocracy into a reality I can relate to.

We then wandered over to the Model Farm where I realised I have a direct link with the Shugborough Estate - maybe I am a retrospective millionaire!

The Model Farm was spawned by the agricultural revolution and whilst its creation was hailed as a great in farm productivity, the reality was that a few of the rich got richer and the peasants were thrown off the land. The architect behind the farm also worked for Coke of Holkham (Norfolk), founding father of the three course rotation, and a distant relative on my mothers side. Old photos of the Coke clan reveal an uncanny similarity to yours truly and I even carry an altered version of the Coke name as one of my christian names. But that's not all. My family were all millers and, lo and behold, who should have made the milling machine on display in the museum? None other than Cooke and Son of Lincoln. 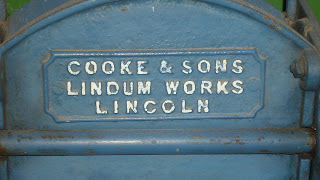 Somehow I feel sure I have been cheated out of my birthright, be it Holkham Hall in Norfolk or here in Satffordshire!

Belle and I completed the visit with a ride on the back seat of the estate road train - returning to the boat as the first drops of rain fell from a leaden sky.

Dodging between showers I ventured out on the trusty bike in search of maggots. I failed to find the fishing tackle shop but did manage to capture two more aqueducts and blag a handful of maggots off some lads fishing on the bank.
Posted by Andy Tidy at 7:00 am