Half-Safe, Across the Atlantic by Jeep

Every generation throws up a madcap adventurer, someone with an unhealthy passion to attempt something so utterly foolhardy to the common man as to potentially render them a certifiable loony - think Rannulph Fiennes. 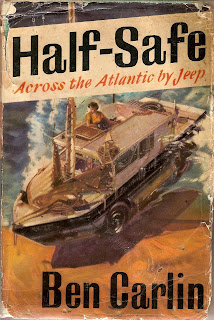 Kath of nb Bobcat read my book review of Gerard Morgan - Grenville's 1970’s account of Barging into and felt I would enjoy another watery tale from two decades before. She sent me a copy of “Half-Safe Across the Altantic by Jeep”, a tale of one man's obsession with the idea of a circumnavigation the globe in an army surplus amphibious Jeep.

Way back in 1946 Ben Carlin became obsessed with the idea that this feat was possible in a wartime jeep, an experimental craft which was labelled an unmitigated disaster after most of the 5000 units built disappeared beneath the waves a few minutes after launch. Carlin was a man undaunted by such obstacles and invested all his money and eleven years of his life (eight travelling) to realise his ambition. Perhaps the most amazing thing is that he managed to find a woman (Elinore) willing to marry him and accompany him as far as . 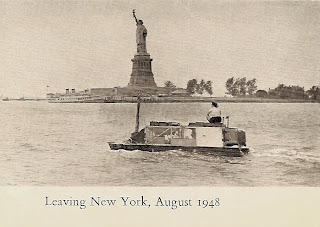 If you think the sailing of a narrowboat across to is an amazing achievement you need to read this book. Just look at the freeboard on this baby, and the limited accommodation inside. All this and it was powered by a standard ford petrol engine which drove it along at an agonising 2.5 mph and consumed a gallon of fuel each hour.

The book is no literary classic, but the adventure it describes is a man sized human endeavour tale up there with the Thor Hyadal’s exploits in Ra and Kon-Tiki. If it wasn’t for the photos I wouldn’t believe it was true. 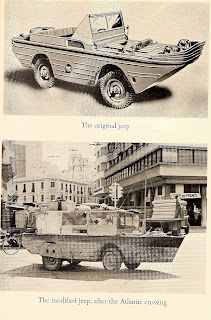 One glance at the map will tell you that they made it all the way to , where Half-Safe was stipped and rebuilt in ready for the next leg of her travels. And there the story ends.

I have cheated, I looked on the internet and discovered that the full circumnavigation was eventually achieved, but the second book wasn't published till after his death in 1981.

The likes of Ben Carlin offer a rich splash of colour in an otherwise monotone world and the story of his adventure deserves to live on. I was sent the book on the understanding that it should be placed with another boater with a similar passion for watery stories, so here is the deal:

1. If you would like to read this antique tome, let me know and I will post it to you - on the strict understanding that you add your name to the list and place it in the hands of another reader with similar interests.

2. Unearthing a copy of its sequel “The Other Half of Half-Safe” is like finding hens teeth. If you have a copy lurking in your collection please lend it to me – I will gladly pay the postage and credit you in my subsequent review.

Thanks for the write up you do it so well I felt so proud of introducing you to the book and
I too would like to read the other half of the journey! I think from memory there is one in Australia somewhere?

Not only was Elinore prepared to join him but she suffered terribly from sea sickness. My hat is well and truly off to her and what she achieved.

Kath
I loved every musty page! The second book looks to have been published by his old school, where Half-Safe now resides.
The face price of A$40 seems a bit high so I will fish for a second hand copy.
Thank you once again - much appreciated.
The Capt

There's another book which contains both the original story and the follow-up book.

I found a copy in my local (New Zealand) library.

"Half-Safe around the world : by amphibious jeep from Montreal across the Atlantic, Europe, Asia, Australia, Japan and the Pacific to Canada and back to Montreal / Ben Carlin."

Also there is an interesting documentary on Youtube about Half-safe: