Fixing a hole where the rain gets in.....

Or: what Father Christmas does on his dress down day
January 2013

It all seemed so easy. Christmas was coming and guests were arriving and there was just time to redecorate our back bedroom which we finished with nearly a week to spare. 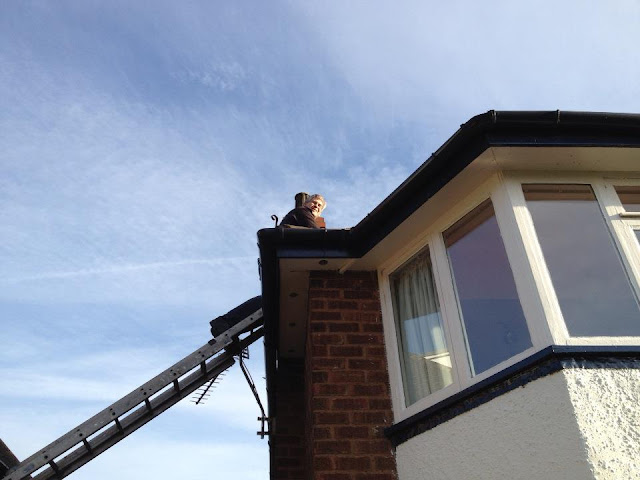 But there was a snag, or two. First up I noticed a dribble of water inside the bay window which could only come from the flat roof. Its got to be 25 years old, so its no great surprise and an hour or so up the ladder with a pot of felt cement knocked the crack on the head, at least for the time being. Bingo - problem solved for Christmas.

Alas it was not that simple. Sure I fixed the flat roof but then I noticed the wet patch on the wall, just there the chimney stack is. I had noticed some dodgey pointing a while back but due to its inaccessible position I put it off for another day/ week/year...

There was only one answer - repoint the chimney but it would have to wait for some mild dry weather, maybe March? The first weekend in Jan dawned clear and bright, dry for several days and the thermometer hovering at a steady 13C - and I had nothing to do. How better to spend a Saturday morning than perched precariously 25 feet up with a bucket of cement in one hand and a trowel in the other.

That said, the deed is done and I escaped without injury. One repointed chimbley and a rapidly drying guest room wall. Now, what colour did I paint it?
Posted by Andy Tidy at 6:00 am

That is a strange angle for the ladder or is it a roof crawler?

Neither really Nev - It is laying at the angle of the roof but its standing on my neighbours flat roof extension. Not an easy place to reach and with ho horizontal ridge to hang a ladder from access was not good. That said, the extension reduced my exposure no end.

Ian always finds he runs out of hands in those situations. With one holding on, doesn't have enough left to do the job! Maybe that's why I've found myself out on the roof and up the ladder so often!

Are you supposed to hold on?