This account represents a neat counterpoint to my last review covering the Aylsham Navigation. 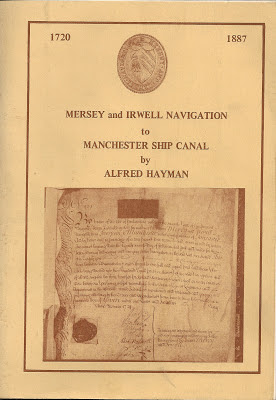 Both were river navigations built in the mid 1700's, and both came to unusual conclusions, but there the similarities end. Whereas the Norfolk navigatation used an obscure river to reach an equally obscure town, the latter linked the mighty Mersey with the growing city of Manchester.

The booklet was written as a labour of love by Alfred Hayman in 1981, long before the introduction of computers. It's all hand typed and then reproduced, so the quality varies a bit here and there, but his passion for the message blazes through. As manager of the Bridgewater Department of the Ship Canal Company for 20 years he was well placed to pull together a detailed record of this unusual waterway, working from his home in Bridgewater House at the foot of the Runcorn Locks.

This was a navigation ahead of its time, developing the Mersey from a shallow tidal ditch into a viable communication route, and making the shareholders some serious money into the bargain.

Just consider this as an investment:


The account trawls the minute books and local historical records of the navigation and charts its meteoric success, its competition with the later Bridgewater Canal, the railways and ultimately its demise as a bigger and better Navigation assumed its course. The Mersey and Irwell was ultimately overlaid by the Manchester Ship Canal which, during the first half of the 20th Century propelled Manchester onto the world trade stage and carried many millions of tons of product to and from its huge inland port.

The level of detail in this account is fascinating. The issues and problems associated with running a waterway are all there, faithfully laid out and awaiting analysis.

In the late 1800's the canal became part of the wider Duke of Bridgewater's interests and after much wrangling, the Manchester Ship Canal bill was passed in 1885 and the sum of £1,710,000 paid to the Bridgewater Navigation Company.

So, what of the line of the old navigation today? Much was absorbed into the MSC's 25 mile length, but some fragments remain in the shape of the bits bypassed as the line was straightened, plus the remnants of the associated Runcorn and Latchford Canal and a few olsd waterside warehouses.

Its strange to reflect on the rise and demise of such a successful waterway which rather than evolving in ever greater incarnations, was completely overridden by the UK's greatest ship canal which itself now stands largely idle awaiting a new lease of life.

I have no idea where you would get a copy of this limited print run item - mine was borrowed. But if you are interested in waterway history, and particularly that in and around Manchester, this is a must find item. Not necessarily an easy read, but like the waterway which preceded it, it pays a high dividend if you invest the time in it.
Posted by Andy Tidy at 6:00 am

The answer to your question about where you get one is - eBay. I just bought one!

Graham - its all out there just waiting to be found.
Andy

Graham - Thanks for the comment. I havnt seen any of the books you mention - there is so much old material out there! If you send me your e mail address I promise I wont publish it!
As for early mornings - I have to admit that I use the auto timed function. I am up at 6.00 most days but thats for work rather than blog writing.
Glad you like the blog. It is fun to write, I meet a lot of interesting people through it and it is a great way of recording my thoughts /facts for future reference.

Halfie
That was an oops - I forgot to apply a forward posting date. Its about number 6 of a series covering the Ogley Locks from Brownhills to the area there the Lichfield restoration starts and so completes my exploration of the lost arms of the Wyrley and Essington.