Sail and Storm, The Aylsham Navigation

Sail and Storm, The Aylsham Navigation
by The Aylsham Local History Society and Sarah Spooner
Jan 2013

Well, lets start the new year with a review of a book for rivet counters and a pechant for anoraks. 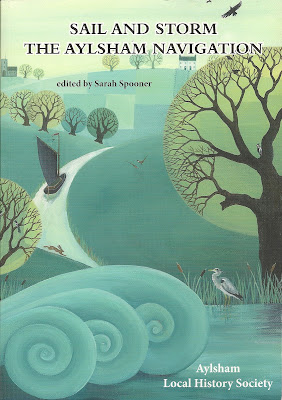 Actually, that's not entirely fair. You know when you start to read with a book produced by a local history society that you will soon be drowned in the minutiae of local historical detail. You know - who said what at which parish council meeting. In some ways this criticism can me leveled at this book but Sarah Spooner has done a pretty good job in editing it into a readable format.

Its an in depth review of the Aylsham Navigation from conception, through construction and operation and into decline and dereliction. But far from being just a commentary of a six mile rural canalised river, it is also a cross section of rural life at the end of the agricultural revolution and through the distant reverberations of the industrial revolution, an earthquake which shook the foundations of our nation.


Having grown up in Coltishall I have always been aware of the Bure, and spent a large part of my youth on or on it between Wroxham and Aylsham. There therefore isn't a reach or structure along its course that I am not familiar with. In more recent times I have revisited the structures and posted updates in this Blog. However, I have never really given much thought to it as a working waterway and this book filled in all the gaps.


The Navigation was about six miles long, from Coltishall Lock to Aylsham Mill.

OK, so they are the bald facts about the track, but the book also explores the villages, industries, wherries and the people who were impacted by the waterway. Amid the welter of facts you get a picture of life in North Norfolk over a 100 year period when the industrial revolution was being embraced by local entrepreneurs and changing the face of the area.

Perhaps the strangest thing when reading the account were the names of the characters involved in the navigation at Coltishall - family names like Neave, Rivett and Money are there in all their glory and if you visit the village of Coltishall and ask around they are still there today. This consistency of population is a bit scary and not least the constant references to the Cookes - a band of millers who had interests up and down the valley. This clan included my own Grandfather (Thomas Cooke) and my father who married into a dusty dynasty, operating Aldeborough Mill on the Scarrow beck, a tributary of the Bure, and in the Maltings below the navigation in Coltishall.

The book also links in the huge lime and marl workings in Coltishall whose abandoned  excavations represented my childhood playground - my friends daring each other to penetrate the furthest recesses of the gloomy kilns.

The end of the navigation was in some ways commonplace with falling movements and tolls and the Commissioners struggling to maintain the infrastructure within their reducing income. Left to its own devices the route would have withered and died for lack of interest during the 1st world war but fate intervened with a flood of Biblical proportions, damming up briefly behind a railway embankment before crashing down the valley Tsunami like, tearing out most of the bridges and the locks.

This devastation left a number of wherries stranded on the adjoining meadows with only the Zulu worth salvaging. This boat was stranded above Buxton Lock and was manhandled over the remains and floated down to Coltishall to repair.

And bar the shouting over who was responsible for what, that was that. The Navigation was left to its own devices and has largely followed is "navigation" route for the last 100 years, appreciated only by intrepid canoeists, fishermen and the occasional walker who has to persevere to force a route along what can at times be a very overgrown towpath.

This is starting to change with the creation of a Navigation Trust who are actively promoting it as a tourist attraction, making the most of the centenary of the flood to raise awareness.

As for restoring it to navigable status, it wouldn't be impossible and would offer a particularly twin to the North Walsham and Dilham Canal located a few miles to the north. However, the idea of boater operated locks on the Broads does not seem to attract too much enthusiasm so for now the best way to enjoy this rural navigation is to take a canoe trip downstream from Aylsham, maybe catching a steam train back to recover the car.

And how do you get the canoe back to the car? Perhaps steam trains have special canoe trailers? There's a flaw in every perfect plan!

Ah Graham - I can see that you canoe alone. I was thinking of two paddlers - one to go back to the car by railway and one to wait with the canoes whilst supping a pint or two at the Rising Sun.

The video of the waterway is first class as well
http://aylsham-navigation.norfolkparishes.gov.uk/files/2012/03/DVD-cover001.jpg

You can hire canoes from "The Canoe man"

Brian - I had forgotten about the canoe man - I came across his site a couple of years ago. I have a desire to build a canoe...
Video is great but not as good as the real thing.
Andy

Bill
Its very much in print - its a new publication out last September. You will find details here:
http://aylsham-navigation.norfolkparishes.gov.uk/2012/09/03/sail-and-storm/
Andy