The Pinxton Arm is an obscure 1794 branch of what would have once been described as the Cromford Canal mainline, not that either canal has carried any waterborne traffic for decades.

The arm strikes off to the east of Codnor Reservoir, through the village of Ironville before reaching the Pinxton about three miles to the north east, running on the same contour as the rest of the Cromford Canal summit pound. 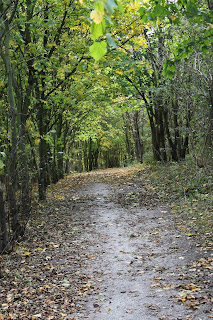 After a rather spectacular sandstone bridge at the junction, the canal burrows its way behind the dam wall and then under a footbridge before sneaking into the back end of Ironville, complete with a 'de-humped' bridge by the church and a further low flat topped railway bridge. Whilst the canal bed has been completely filled in, it's route remains obvious and the bridges are intact. In fact, they are all pre sprayed with graffiti so all you need is a JCB and a drop of water and us boaters would feel right at home! 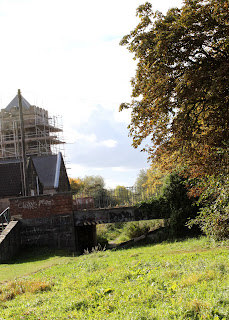 This section of canal bed to the east of Ironville has been converted into the Pinxton Canal Path, a well maintained route through the trees whose early autumn colours were quite beautiful at the time of our visit. Before long this path brings you to the busy road at Pye Bridge, where the bridge and it's cast iron balustrades are intact, but obscured by undergrowth. By this time the formal canal path runs out, but you can continue on to the double arched railway bridge after which the canal track completely and utterly disappears. When I say disappears, I don't mean it becomes difficult to discern. I mean that it's course was removed in the 1990's when the Somertherfly open cast mine eradicated the canal and dropped the surface level by 30 feet or so. 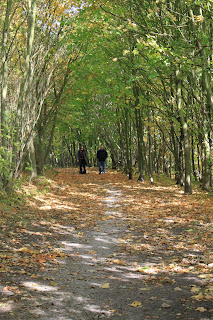 We clambered across to the abandoned workings and climbed the ridge of mine tailings, trying to work out exactly where the canal bed re-emerges on the far side. It's not obvious, but its path lies across the valley to the north east. Sadly, we could find no way of reaching it but determined to explore the final section next time we visit, starting at the Pinxton Wharf end. 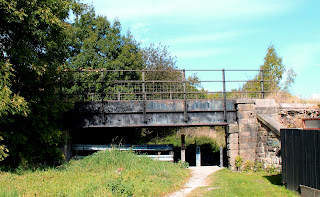 The interesting thing about the Pinxton Arm is that it provides a good interim objective for the restoration project. Rather than tackle the two big road embankments and the Butterley Tunnel straight after the restoration of the locks above Langley Mill, the plan is to reopen the Pinxton Arm which, Smotherfly apart, has no significant obstructions. As as for Smotherfly, the site included a channel for the diverted River Erewash which could easily be adapted to carry the canal, and there is no shortage of spoil with which to construct the necessary embankments. The Friends of Cromford Canal have been hard at work and secured planning permission to include the canal line in 2008.

A notable feature of this canal track is the total absence of water, there isn't even a trace of boggyness. However, I suspect that the River Erewash can be channelled in to supplement the supply from Butterley Tunnel, pending the eventual reconnection with the abundantly supplied section at Cromford.