Everything including the kitchen sink

I have noticed the edge of Wand'ring Bark's sink getting a bit 'crunchy' of late, and some rust coloured water seeping out. This is not good and it isn't getting any better.

With Belle away being intellectual in Stratford, Tilly at school and Jeff winging his way to Bulgaria to renovate an orphanage (long story) I found myself with a day to myself - in fact a very long day as I has to drop Jeff off at 4.00am! 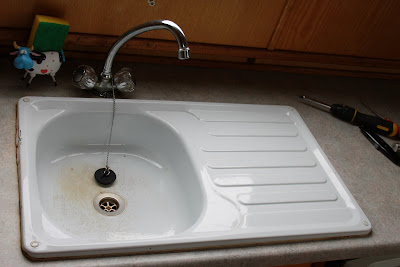 After a quick measure up, I was off to Midland Chandlers in Penkridge returning £80 worse off but the proud owner of a new stainless sink and drainer. The only snag was a  total absence of fitting instructions. Well, so what - instructions are for wimps anyway is my standard cry, I'll make it up as I go along. 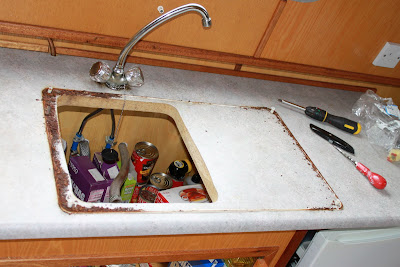 Getting the old sink out was pretty easy, just four screws and unclip the waste water pipe underneath. The problem came when I realised that the new unit needed a bigger hole to accommodate the drainer as well. This involved the introduction of my trusty jigsaw but also meant removing the taps, which is always a job I hate. Every time I do any plumbing I end up with flood, and today was no exception. 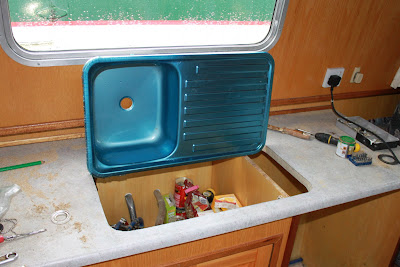 After much huffing and puffing the taps were extracted and the new hole cut, and then recut because the first one was too small. Then it was time for the magic silicone - amazing stuff. First I gave the cut surfaces a liberal annointing to repel moisture, and then applied a generous bead round the edge of the hole and also the lip of the sink. With all this glorious goo in place, I dropped the sink into its hole and pressed down - the silicone is all that holds it in place. 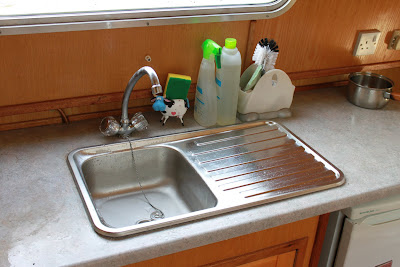 With the taps cleaned up and replaced the end result is a nice clean stainless steek sink, which is at least two inches deeper than the old one, and should make a better job of containing the washing up.

Not bad for a couple of hours work.