Middle Aged Spread
Age takes its toll and after a while many things start to bulge a bit. Its true of old working boats and its true of boaters in general.

As a child I distinctly remember arriving at Hurleston Bottom Lock to find a band of boaters trying vainly to make their old wooden narrowboat fit into the slimline chamber. They huffed and puffed about bowing walls, but of course it was actually a combination of spread on the part of both the lock and the craft trying to get in. They never did get into that lock, which is still one of the tightest on the system. 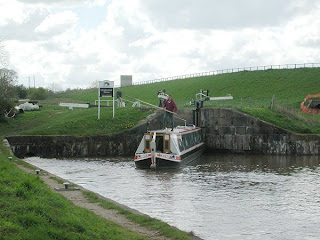 Photo courtesy of the TNC archive

I have suffered the same fate, my middle gradually spreading over the years, trying to accept this change with sanguine resignation. However, last year I took drastic action and lost 2.5 stone in as many months. Here we are, a year later and about 10 lbs have crept back on again - this won't do.

My litmus test is my trusty dinner jacket, an item I bought over 20 years ago before we got married. All my 36 inch waist trousers were thrown away years ago, except the DJ which lurked away in the recess of my wardrobe. After my diet I proudly wore the suit to Christmas functions and figured it could be safely pressed into service again for the forthcoming National Franchisee of the Year Awards.

Jeff caught me trying it on a couple of weeks ago, noticing a certain tightmess around the bottom and the excessive strain on the seams. Time for dreastic action and another visit to Mr Tonks, the friendly Cambridge Diet man who helped me shape up last time.

Two weeks on and eight pounds lighter I am on target to slip into that ageing DJ once again. 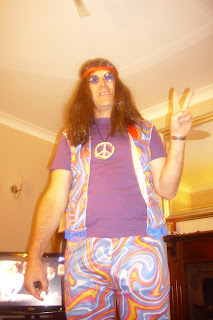 Hey man, thats not my dinner jacket!
So, the moral of the story is that locks only get narower and boats only get wider but our own girth can be controlled. I swear by the Cambridge Diet as a fast and relaible way to shed unwanted weight, and if you happen to see me wandering around central Birmingham in an outmoded dinner jacket and a superior grin on my face, you know the reason why.
Posted by Andy Tidy at 7:00 am