I recently took a look at the Swan Arm, a still navigable section of the Wednesbury Old Canal which stops at the recently installed Black Country Spine Road.

A 3/4 mile branch canal was added in 1826 to reach some new coal mines in the area, known as the Ridgeacre Branch Canal, a name which has since been reused by the pub which sits on the junction. 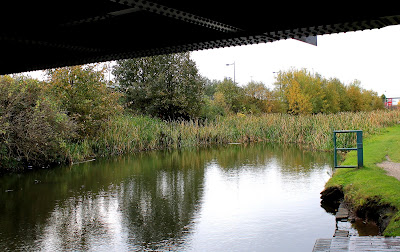 This arm starts off all clogged with weed but soon opens out onto a clear wide waterway, all ready for boats were it not for the culverted section under the roads! The quality of this stretch puzzled me till I cycled along it and realised that it is maintained by a local fishing club, offering a good measure of water from which the fish cannot escape. 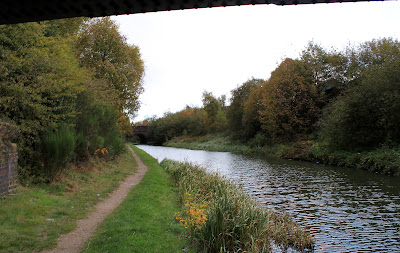 The towpath is well maintained and forms part of the Sandwell cycle trails network, taking riders along a surprisingly pretty tree lined stretch of water.

Fishing near the terminus

As usual, all traces of the mines it served have gone, and the area is now surrounded by housing who's residents use the canal area as a linear waterpark. Given a choice between what I see here and the slow death of the Swan Arm, I would opt for the Ridgacre Branch canal option anyday.

Have you been there recently. I think you might be shocked. I would like to discuss this with you as I have been tasked with looking at water quality as part of WatersideCare project.

Louise
You can reach me at andtrew.tidy@sky.com
I havnt been along the disconnected part of the Ridgeacre for about 3 years.
I like the organisation you are linked to:
The Keep Britain Tidy family
The clue is in my e mail address!
Andy