And today's reading is from the book of...

And so today's reading is taken from the Book of BW, Booklet No4, starting at Autherley Junction and ending at Stourport-on-Severn. 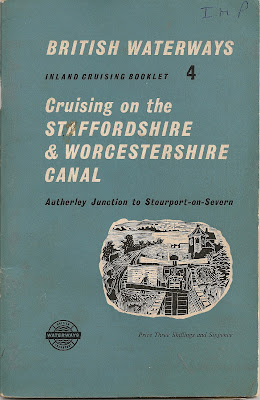 BW's cruising guide to the south Staffs and Worcester Canal

How many time have I listened to smug preachers banging on about "if you refer to the original Greek", claiming some form of spiritual high ground to which us mere pew fillers can never hope to attain by virtue of their advanced theological learning. However, I have to admit that at times there is something to be gained by going back to the source document. This allows you to skip over all the hyperbole and opinion, getting it straight from the horses mouth, so to speak.

And so it is with the BW Cruising Guides. They mark a moment in time and provide an insight into where BW was at the time of its creation.

At the time of this booklet BW was quite upbeat on the future of commercial carrying. Tonnages singe the war has increased to 1956 and involved 10.5m tons (real tons - not the pseudo but very similar metric tonnes). it was "fully realised that some waterways could carry more traffic than at present, and the Commission are determined that they shall be equipped to play their full part in the country's transport system". At that time it was still felt that "Modernised and backed up by up-to-date machinery and methods, these waterways can provide an efficient, reliable and safe transport service for British industry".

Investment was planned and new commercial traffic was sought, not least from readers of the booklet who may have been in a position to provide new contracts.

The booklet carries a pasted in forward by the new BWB who "extends to you a cordial welcome to the waterways" and advises that the BWT "Forward" from which the above was drawn is out of date and the brave new world will be ushered in via the forthcoming "The Future of the Waterways" to be published in January 1964.

Perhaps the most telling take on the future of the waterways is by reference to the navigation Code of Conduct provided for the guidance of pleasure craft users, which starts with:

1. The main function of Britian's waterway system is to carry commercial traffic, and although British Waterways will give all possible assistance to ensure easy passage for pleasure craft, it will be appreciated that commercial vessels must be given priority at all times.

OK, that's pretty clear, providing an insight into the place of the pleasure boater and the future direction the inland waterways is expected to go in the coming decade. Little wonder the subsequent evaporation of commercial traffic led to a strategic vacuum, canal closures and a general malaise within BW. 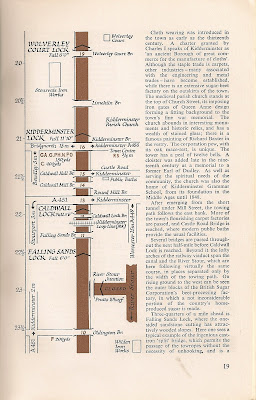 So that's a lot of big picture stuff drawn from the facing pages, but what of the cruising guide itself? In truth it's a cracking little booklet which carried a neat two page history of the canal, about 20 black and white photos, a comprehensive commentary about the surrounding area. Finally there is the guts of the guide, a seven page linear map marking the features in sequence but with no concession to bends or geography. Whilst this may sound a bit odd when compared to the Nicholson's and Pearson's we use today, it is a functional format I grew up with and offers a reassuring flashback to my boating past. 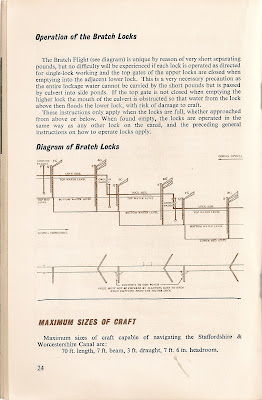 How to operate the Bratch Locks

But the guide dosn't end there. Recognising the need to instruct novices we are shown how to operate locks and more particularly we are instructed in the intricacies of the Bratch Locks which, lets face it, baffle most boaters at one time or another.

Then there are the adverts which really date any publication. Alongside the BW ads for their own 'Water' class craft there are promotions for Bolinder engines and even one for Double Pennant whose presence at Aldersley Junction is now reduced to an ivy fringed sign next to a shuttered side arm.

So here endeth today's lesson taken from a publication issued at the threshold of a new era for the inland waterways, an era which was to last almost exactly the duration of my life to date.

Oh - you've beaten me to it! I bought some of these old BW guides recently and was going to post about them. Never mind - you've done a much better job than I would have done!

And congratulations on your own publication! Picked up a copy of WW yesterday with your article inside.
Ian has a selection of those guides, inherited from his Dad.

Halfie - they are rather lovely little books. I was tempted by a full set at the weekend - but resisted.
Thanks Karen - writing the article was a nice end to the project. More next month.