The Country Canal
by Ronald Russell

My haul of canal books from Lyme Regis included Ronald Russell's 1991The Country Canal and I very nearly didn't buy it. Books on canals can be samey and there needs to be a fresh perspective if they are to command attention. 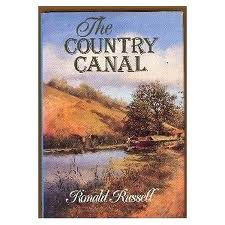 As it turned out the book is quite quirky, following Russell's curiosity in a number of canal related directions, but all with an eye on the country canals as opposed to their more urban counterparts.

First he sets about describing the birth, maturity and decline of a canal from the perspective of the impact it had on a fictional country village through which it passed. We were given a glimpse of Brindley surveying the route, this engineers getting the job done, problems with resistant landowners, cash crises ad the ultimate decline in the face of a new railway. All very readable and an interesting way of approaching a well worn path.

Then a complete change of direction and we head east to the fens where we explore the impacts of Vermuyden in the mid 1600's. These are the lonely miles of the Middle Levels which may lack prettiness but provided essential navigable routes in and out of the area as well as drainage channels. He clearly has a real heart for the fens and its an area about which not a lot has been written.

Having exhausted the Fenland backwaters he indulges in his passion for the lost canals, focusing on those in the south erst and the north east, revelling in his exploration if the less successful country canals in Somerset, Devon and Cornwall which extended for over 150 fragmented miles. This is all interesting, if whimsical, stuff if you like tracking down the lines of long lost canals, and offers some good reference material.

Perhaps the weakest aspect of the book is his forward looking homily at the end. Ending books this was is never a good idea and becomes dated almost as soon as it is written. He ends positively and I get the impression that he is keen to be done with the writing and get back out there, splashing his way along some God forsaken creek in search of some fragmentary remains abandoned a century and a half ago.