The Voyages of the Princess Matilda
By Shane Spall
June 2012

I came to the Princess Matilda saga a bit late really. I was flipping TV channels one evening and came across Shane and Tim Spall setting of from Whitby on one of the last legs of their epic round Britain trip aboard their barge Princess Matilda. 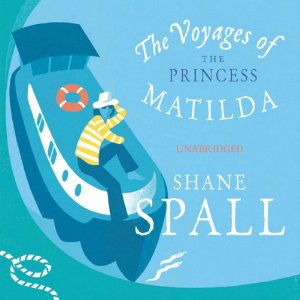 Oh the glories of Sky, they repeat stuff so often it wasn't long before we were Sky Plus'ing both series One (Portsmouth to Cardiff) and Two (Cardiff to London via the Caledonian Canal) simultaneously.

Whilst starting to get into the series I noticed a review in Waterways World of Shane Spall's account of the London to Cardiff section, which spanned a period of about five years, mentioned it to Belle and then promptly forgot about it till I unwrapped a copy on my birthday.

Its a cracking watery read, providing a context to the expedition based on time owning a narrowboat and all set against a diary account of their battle with Tim's leukemia a few years ago. Like many boaters, they define their lives "before boat and after boat" such is the difference owning a craft can make to you lives.

Their stop go progress is well written and Shane has a wicked sense of humour and a seemingly boundless trust in Tims navigational skills, a view he clearly does not share. He carries the weight of navigational responsibility heavily upon his shoulders - and so he should considering the waters he has to cover in an under powered barge.

Its a slow journey round our island, proving that adventure needn't be a long way away. Ours is  beautiful country and there is so much to see, particularly if you are travelling at 6mph!

The book has the advantage over the TV series in that it covers the entire trip from London, whereas the TV programme picks them up much later in the South West.

Perhaps the most striking thing is the difference between the two individuals who offer a charming counterpoint to each other. Tim with his many thousands of pounds of hi tec navigation equipment and scared stupid and Shane with her trusty AA road map of Britain which is never far from her reach but with complete confidence that they will reach their next destination.

As with any good book, it leaves you wanting more. And in this case there is more - the whole northern section between Cardiff and London. Let's hope Shane has her laptop out and is busy writing the sequel.
Posted by Andy Tidy at 6:00 am

I am looking forward to reading Shane Spall's book.I know Helford very well as I was born there! Also Princess Matilda was overwintered at Ramsgate Royal Harbour. I now live a few miles from there! I may get a copy for my holiday next week and leave the other's to do the locks etc. Thank you for your review.
Pam T

I read this on our recent cruise. I read about half a dozen books a year and this was one of two read over the trip. Best book I have read in a long while. Really made me LOL their simple humor was so well described and the honesty and depth of their love was evident.

I can't wait for the next book.

What you don't seem to have realised is that when you noticed the Waterways World Review, your copy was already sitting in my bedside drawer wrapped & waiting for your birthday! And did you really think you just 'stumbled' across it on the tele ...? More like guided viewing ;o)