We awoke to a chorus of pigeons proclaiming "you cant go fishing". Next time you hear a pigeon listen carefully, you will see what I mean....

Picnic tables at Stoke
Hem Heath visitor mooring isn't great, but not on account of the negative pigeons. Nor does it suffer from anti social youths, or excessive road noise. No, the problem is a little bitty concrete ledge which sticks out about two inches maybe six inches below the waterline. This projection means that the boat grinds away every time the boat moves - very annoying.
Having been roused by those blasted pigeons we were on our way by 8.15am. passing the site of the long defunct Hem Heath Colliery and making that passage along a featureless stretch to Stoke. This route takes you past the truncated walls of old factories with bricked up windows low agianst the water. Every time I pass I wonder who used to work inside. 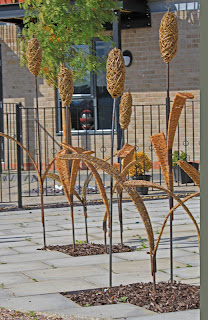 Artwork at Stoke's new development
England started their Rugby World Cup Campaign against Argentina as we launched our assault on Stoke Locks, the scores flashing back from Bournemouth where Jeff was watching closely followed by the feed on the BBC web site.
It was a relief to have the Staffs and Worcester / Trent and Mersey behind us as, if the truth be told, I was impatient to get back on the Caldon. We swiveled round the Bone and Flint Mill, passing through four locks and gaining nearly 50 feet in height as England held off the Argentinians. England were bad - but so were the opposition. It was a tight game. On through the lonely Planet Lock which once again threw up a mad person  - the lock seems to attract them. This stretch out of Stoke is changing. The old factories have gone and in their place are long lines of new housing. Hurrah - England produce a late flourish and win!
We ran the gauntlet section where the old railway track is parallel to the canal without incident, but Belle's energy was flagging as we approached Engine Lock. I therefore eased back into solo mode, following nb Comfortably Numb through the next lit bridge with the strains of Pink Floyd running through my brain. Then CN stopped and I had to negotiate the next lift bridge on my own - another first. 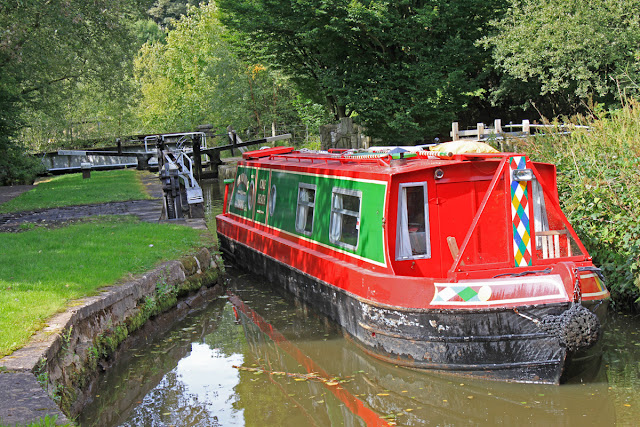 Stockton Green Locks
The Stockton Green flight are always a pleasure as not only do they lift you up to the summit pound, they are also very pretty, winding through the trees with a grand old pumping house at the bottom. The locks are also flanked by a number of sculptures built by local school children, which adds further interest. 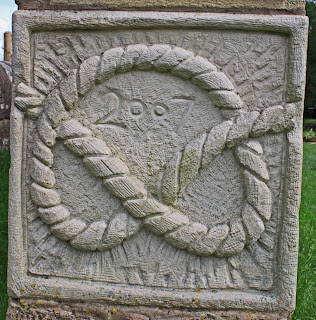 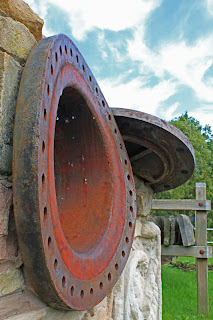 Sculptures at Stockton Green
The summit pound is where this canal really comes into its own, the Staffordshire moors rising up behind Leek and the waterways taking a leap back in time to a slower, simpler age. Our progress was slowed by a boat stopping and starting at Park Lane Moorings but it picked up its pace and didnt hinder us, truning off down the locks at Hazelhurst Junction whilst we turned rught to follow the Leek Arm. As we swung round the corner the skipper walked over and introduced herself  Brenda Ward, editor of the Boundary Post, BCNS's quarterly magazine. Its a small world! 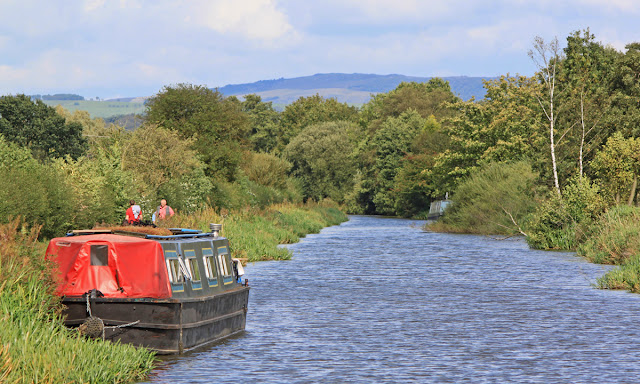 Caldon Canal - summit pound
The Leek Arm is always shallow, but never fails to delight. It winds its course high up above the Churnet Valley, the trees bending over the channel and forming a living green tunnel. Our enjoyment of this section was interrupted by a flash of grey falling through the tree above us and into the cut, the final meter accompanied by a squeak and a gurgle. We had just witnesses a squirrel falling out of a tree, and then scrambling out and back up as fast as his legs would carry him!
The plan was to moor to the west of the Leek Tunnel but three boats were already packed in so we pressed on to the very end of the navigation, winding next to the old aqueduct. BW have been dredging the arm and it is now possible to wind a 60ft boat at the end, maybe even a full length working boat with a bit of effort.
The arm offered a very quiet mooring, the only irritant being he amount of mud deposited on the towpath. Hey ho - that's the price of a dredged channel - mustn't grumble.
Posted by Andy Tidy at 6:00 am

Email ThisBlogThis!Share to TwitterShare to FacebookShare to Pinterest
Labels: Caldon, Trent and Mersey

Ah, 10 September - this was the day we set off on our big trip, and while you were doing this journey were were doing Brinklow to Norton Junction. It seems like a long time ago now.

I loved the Caldon when we did it a couple of years ago, so I'm looking forward to the rest of your reports. (But it's Hazelhurst Junction, not Hazelwood!)

Adam
I enjoyed reading of your recent big trip - and you ended in a heatwave rather than a sea of ice... I dont know how many time I have corrected Hazelhurst - my excuse is the nest door road is Hazelwood.