I woke early at 6.30am so witnessed a glorious sunrise. Belle had a bad night so had fallen back to sleep leaving me with with a few hours to kill. What to do? 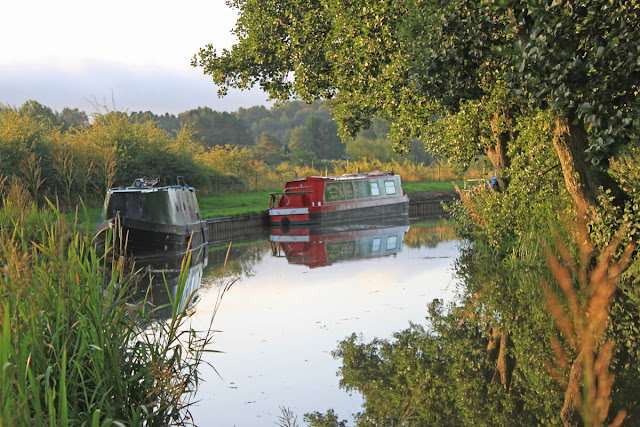 Moorings at the end of the Leek Arm
I had noticed a sign at the entrance to the Leek Arm which indicated the presence of the Rudyard Reservoir, and this has to sit at the far end of the feeder stream which enters the canal at the Leek winding hole. In fact, the presence of this feeder has ensured the survival of the Caldon Canal, sending is steady flow down to the Trent and Mersey for over 200 years. 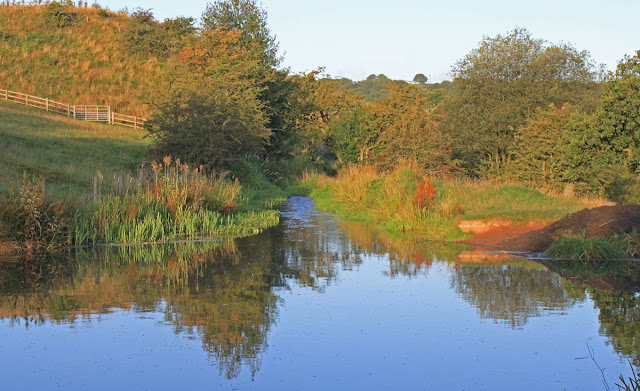 Rudyard Feeder enters the canal
I was sufficiently curious to set off alongside the feeder and see the reservoir for myself. The sign had suggested that it was about two miles away, but I might have turned back had I known it would be nearer four. 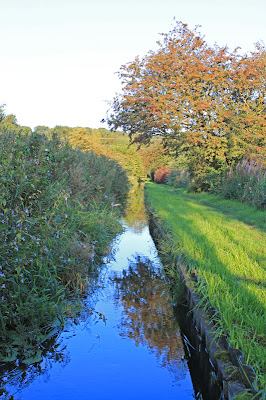 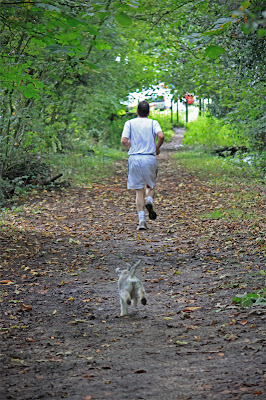 Rudyard feeder
The Leek Aqueduct may have be the end of the navigation, but it certainly isn't the end of BW's interests in the area. Whilst the final winding hole may be a bit of an anti climax as far as the canal is concerned, the real gem lies away to the north.The maintenance of this little channel is an essential responsibility, and its worth remembering that for a long time the whole Leek Arm was merely a feeder channel and was only later opened out for full navigational dimensions. The feeder runs by gravity, it's four foot channel hugging the side of the Churnet Valley, initially slipping away into a culvert but its course remains very visible as it maintains its contour through the meadows. 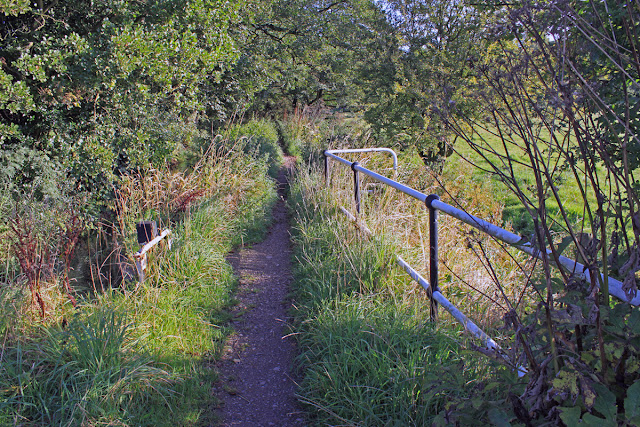 Telltale black and white BW railings
Before long I found myself walking along a well made path which borders the Leek Golf Club, the early morning dew still lingering heavy in the shadows as the first golfers of the day set out to knock nine bells out of their little white balls. Following the feeder isn't difficult and no maps are needed - just keep the feeder to you left and walk against the current. The water soon leaves the carefully tended grass of the golf course behind and you enter the rough meadowlands of the upper Churnet, and the quality of the path deteriorates. My visit was during a dry period and even then I found myself slipping across slick sections of clay which would be very hard going in the wet. 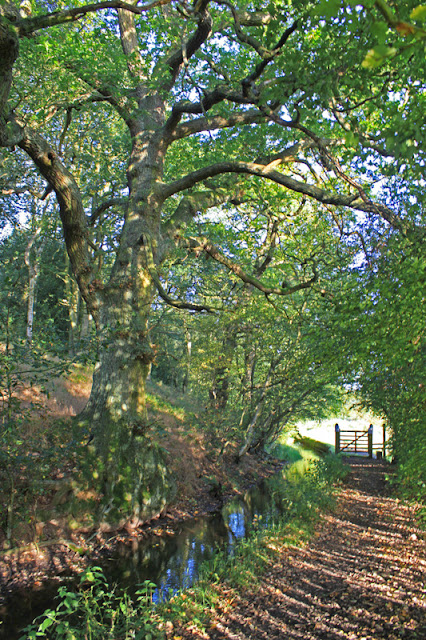 Woodland walk to Rudyard Lake
The signs said that the path was closed as BW were repairing a slipping embankment, but I paid the warning little heed and pressed on, finally arriving at a newly repaired bank where the feeder was in danger of finding its way down to the valley floor below. The path carries a right of way with it, representing the Churnet Way for much of its length and includes a small aqueduct when the stream turns and right angles and crosses a side valley. 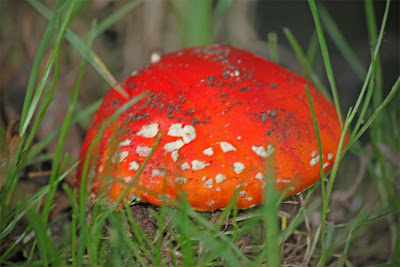 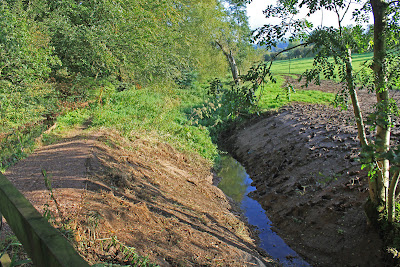 From here the waterway burrows its way under the trees and makes an excellent walk, kingfishers flitting away in front of me and bright toadstools poking up through the leaf mold of autumns past. 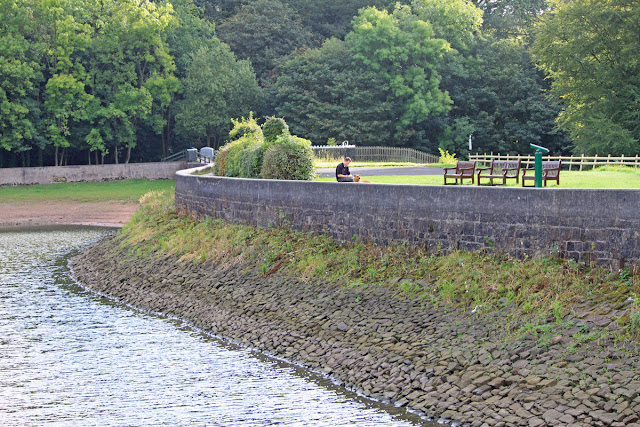 Dam End at Rudyard Lake
I had allowed about 40 mins to get to the reservoir so desperation was setting in as my watch passed one hour and 15 mins, but finally my way was blocked by a huge embankment rearing up across my path.  Having invested all the effort in getting there I stared to be concerned about what may await me at the top. Possibly a muddy pond or a marshy expanse, I certainly didn't expect what I found. 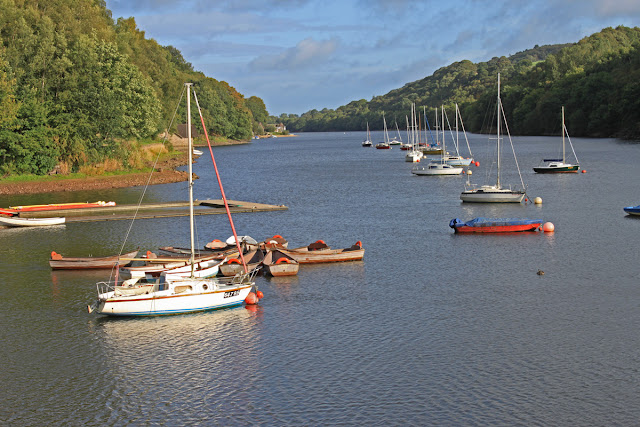 Costa del Rudyard
As I hauled myself over the dam I was presented with a most spectacular sight, a tree lined lake stretching away into the distance with lines of boats gently bobbing at their moorings. This sun drenched scene could have been something straight out of the Mediterranean, with boathouses nestling along the shore. 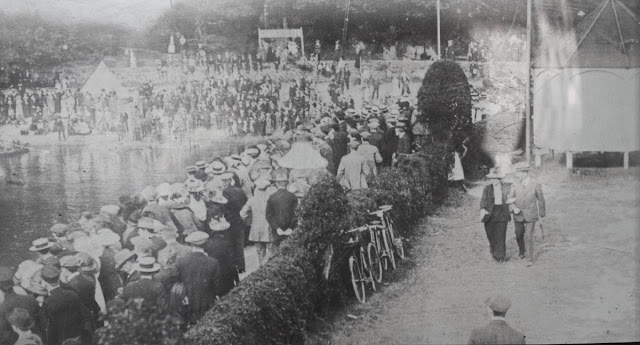 Wakes week crowds
Rudyard Lake is no ordinary reservoir. It was built in 1797 but has been deepened several times during its life to cover 168 acres, but as well as being a vital source of water for the Trent and Mersey it has also been a tourist destination for the people of Stoke. In its heyday it received over 15,000 visitors a day during the Stoke Wakes Week. The lake had many attraction: a steam train, a golf course (closed in the 1930's) and special visitors in the form of Capain Webb as he practiced for his first swim across the channel and also Blondin the tightrope walker who wowed the grounds as he shuffled along his high wire 100 feet above the shimmering waters. 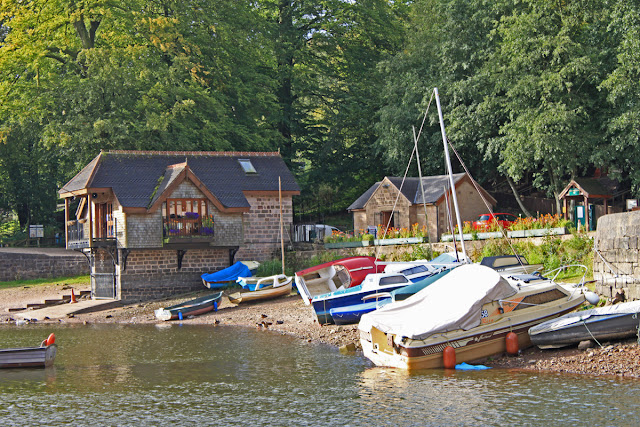 Rudyard Lake Visitors Centre
Even today it receives over 100,000 visitors a year, its waters attracting fishermen, sailors and rowers and its banks welcoming walkers and cyclists.  British Waterways retain the rights to extract water, but leave the management of the site to a local trust, who maintain this jewel for future generations. And is there a connection with Rudyard Kipling?  Yes - his parents met at the lake! 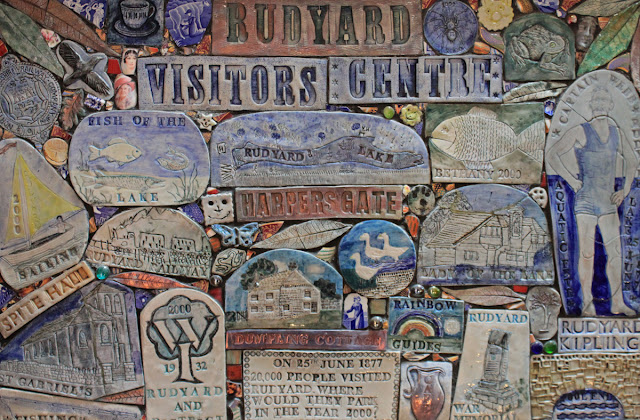 So if you are ever in the area and have a half day to spare can I suggest that you leave your boat behind and take a stroll up the feeder. A truly fitting end to an extraordinary canal.
Posted by Andy Tidy at 6:00 am

Fascinating stuff - and a spectacular destination - who'd have thought it!

Will certainly remember to follow your footsteps when we get to the Caldon Canal, what a great find.
Karen