The Tub Boat Canals of Telford

October 2011
My decision to follow the lines of Telford's tub boat canals was never going to be easy. In fact I think its going to be my toughest lost canal challenge yet.
It has been said that there is coal at the heel of ever successful canal, and nowhere is this more true than among the tub boat canal network of what has since become Telford. This is the site of the Coalbrookdale coalfield, a small geographic site about eight miles long and three miles wide through which a fault line travels with shallow coal to the west and deep coal to the east. The area was also blessed with Ironstone, limestone and clay - a perfect mix for iron and pottery works.
This hilly site was largely devoid of surface water so the early canal builders had to use inclined planes to lift and lower boats in a mainly lockless and self contained system, whose primary outlet was the river Severn to the south. This little network flourished for about 50 years after its construction in the late 1700's but the effects of mining, a chronic shortage of water and unreliable planes resulted the area enthusiastically embracing railways as a cheaper and more flexible alternative.
The majority of the canal network was therefore lost by 1850, buried beneath spoil tips and railway lines. To add to the canal hunters misery, the area continued to be deep mined and industrialised well into the 20th century, before falling into something of a post industrial wilderness till the 1960's. Then, as icing on the cake, the entire coalfield area was designated a newtown site and the waste tips graded over, industry leveled and redundant railways turned unto roads along the lines of Milton Keynes. All this change over a period of 150 years scrubbed out most evidence of the little network of waterways, especially in the central section. But look a little further afield and telltale traces can still be found.
The place to start is with maps of the area as it used to be - working out the evolution and decline of each section. This can then be plotted on a contemporary OS map using known landmarks and core road layouts, which have survived even the reconstruction of Telford. As in decorating, 80% of the effort should be spent on research with the time in the field being very focused and targeted. Its a good job that the desktop research is an interesting task in istelf!
So before I forget what I have learned, here is the sequence of development of the tub boat canals of what is more properly referred to as the Coalbrookdale Coalfield.
Stage one:
Donnington Wood Canal (or Marquis of Stafford's Canal)
The initial section was five miles long built in 1768 from Donnington Wood to Pave Lane, the Wolverhampton Turnpike. A later branch canal was created at Lillishall featuring a 70ft inclined plane and seven locks which operated till 1878/9 at which time both the branch and mainline beyond this point were abandoned. A further section was lost near Lillishall Hall in 1890 when a driveway was laid across its path with the rest becoming disused by 1904 when the mineral line look over the trade. The watercourse dried out in 1928 when the the mine pumping engines were turned off. This was always a shallow canal, even by tub boat standards, carrying a mere three tons per boat. 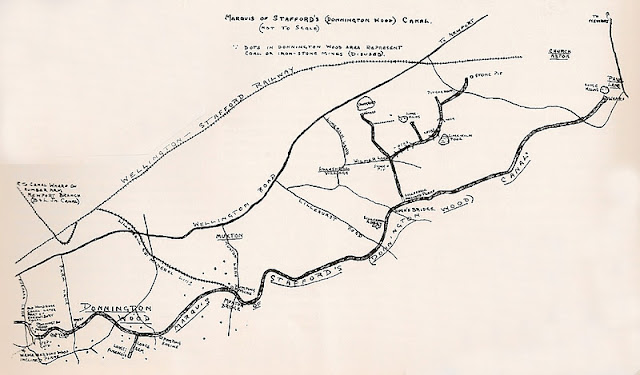 Stage two:
Wombridge Canal 1788
One and a half lockless miles long, built by William Reynolds to move surface coal from Wombridge to his furnaces at Donnington Wood and its junction with the Donnington Wood Canal. Having exhausted most of the minerals at Wombridge he sold a mile of the canal to The Shrewsbury Canal Company in 1793. The Shrewsbury Canal Company built the Trench Inclined Plane and so created a connection through to Shrewsbury. The remnant continued as a branch canal for nearly a century to Bullocks Mill and closed completely in 1921. 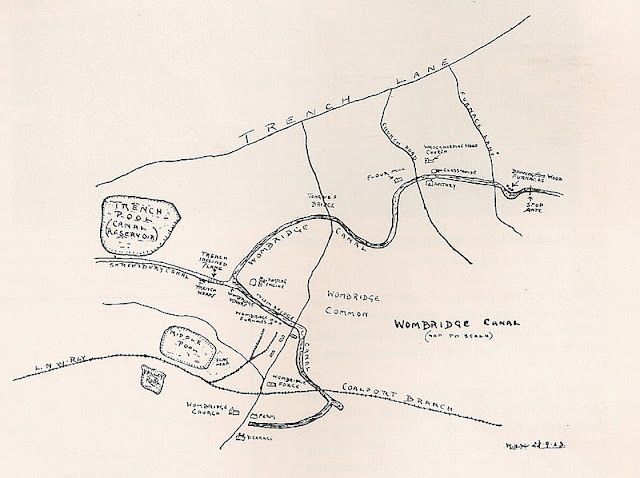 Ketley Canal
At the same time Reynolds was working on the Wombridge Canal, he also started to think about transporting coal and ironstone from Oakengates to his works at Ketley, a couple of miles to the south of Wombridge. This canal was also begun in 1788 but incorporated the UK's first Inclined plane at Ketley Hall, dropping the tub boats down 73 feet to Ketley Ironworks.
The plane was found to be disused by 1818 and it is likely that by then the entire canal had ceased to function by 1816.

Stage three:
The Shropshire Canal
This was the final element of the local canal system, linking the Donnington Wood Canal to the north with the River Severn in the south.


This line also featured a branch at Dawley to Coalbrookdale which was dry by 1825 with the main line converted to a railway in 1860. The final stretch at Blist Hill remained in use till 1912. 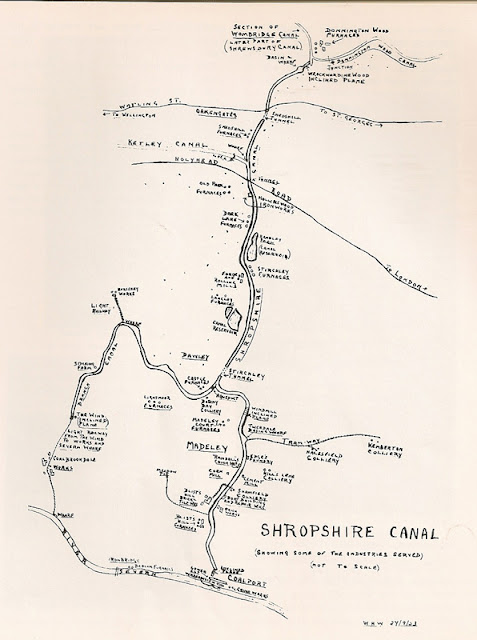