Last night I was plagued by a cow with a cough. Every few minutes the poor beast would erupt with a chesty hurrumph, which echoed across the water. 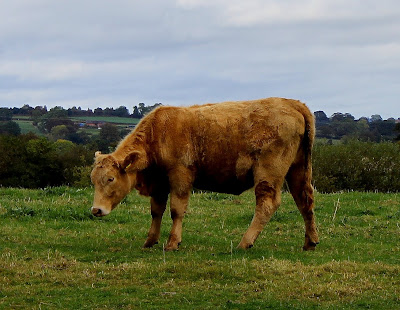 Cow with a cough

I had planned a very active day, using the folding bike to explore the remains of the canal from Norbury to Newport. However, in the event the quietness of the canal overwhelmed me and I didn't even make a start till 1.00pm.

It was strange to have no through traffic on what is normally a busy canal, with just a couple of boats moving off their moorings near Bridge 44.

Whilst I was keen to see the Shroppie reopened, there was something rather beautiful about it's temporary 18 mile cul-de-sac status.

During my leisurely four hour trip back to Wheaton Aston I realised that the local bridges are made of the same sandstone that the Cowley Cutting consists of. I suspect the the widened section to the north of the tunnel served as a quarry for the canal builders. 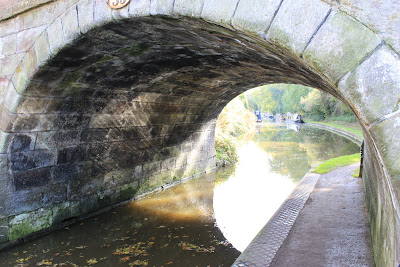 On my approach to Gnosall I was struck by a beatiful tree, quietly shedding its autumn leaves over nb Ami Bauvard. 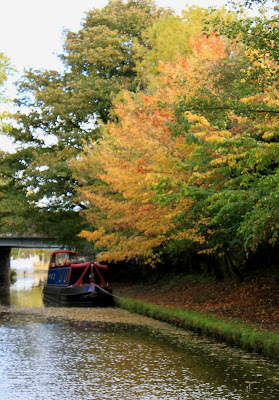 Whilst there was little traffic on the water, the Sunday afternoon walkers were much in evidence, sharing my fine views of the Wrekin across the Shropshire countryside.

One of the few craft moving was a dayboat out from Norbury, crewed by a bunch of enthisiastic but inept pirates. All in all, a day for dawdling and enjoying the tree canyons of the Shropshire Union which were unburdening themselves of their leaves, falling like confetti all around me. A wedding of the Gods, lining the waterway with a carpet of orange, yellow and brown.

All this colour may look nice, but the resulting leaf stew made for heavy going, clogging the prop and impeding progress. The propeller was never truly clear and I came to accept that, providing I was making reasonable progress, I would grind on, only reversing them off when the engine complained of the unfair load.

I had planned to stop at 'my spot' at Little Onn, but someone was already there so I continued on to the visitor moorings at Wheaton Aston, lit a fire and settled down to finish that Dan Brown's The Lost Symbol. Six hours later, and having listened to Led Zepplin No's 1,2,3 and 4, plus Houses of the Holy and In Through the Out Door, I finished the book. All in all its a bit of a dissapointment really - a re run of Angels and Demons set in washington DC. 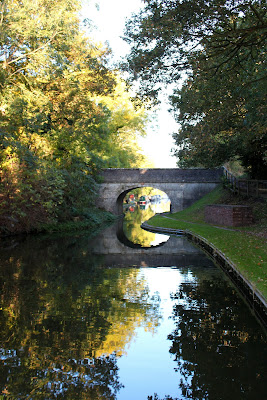 Overnight the wind dropped and the fire, necessary in the evening, proved too much so I slept with the hatch open only to wake up at 5.30am absolutely freezing.