Disaster at Blickling Mill
November 2009
Every now and again I go and do something completely stupid, and cause myself all sorts of bother.
My interest in the Aylsham Navigation in North Norfork kindled an interest in the other watermills built in the wider catchment basin upstream. I therefore went in search of Blickling Mill, just south of Itteringham, with my 78 year old mother. I was delighted when I found it's remains, complete with a lovingly restored mill cottage now owned by the National Trust and let out to holidaymakers. 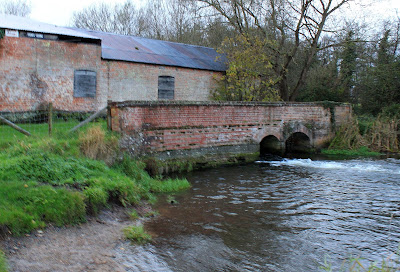 Remains of Blickling Mill
In fact, I was so pleased that I popped the car into reverse and zipped back for a closer look, even though it was pouring with rain. Suddenly things went very wrong. Instead of moving along a firm verge the  sodden earth gave way beneath me and I found the car beached on the bank, with one back wheel dangling in space over a small beach at the side of the millpool.
Not only was it 4.00pm and getting dark, I had my elderly mother with me and absolutely no idea of where I was, even if I could reach the AA. Well, I figured that as with so many boating scrapes, if I get myself into a mess I will just have to get myself out of it.
Driven on by pure adrenalin, I extracted the spare tyre and laid it on the beach and used this as a base for the jack, which I used to push the car up as far as it would reach. I then scouted round for any concrete rubble and bricks and eventually built a tower of sufficient strength to carry the weight of the car. With the jack removed I then built up a ramp of sorts using any sticks and shingle I could lay my hands on, before finally trying to drive the car out under its own power. 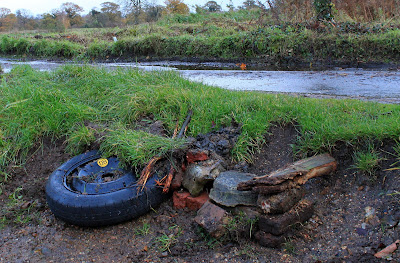 Ahabs way out of a sticky spot
With the light almost gone this was a one try effort, with me at the wheel and Mother Ahab uttering a heartfelt prayer that the angels might lighten the load. I am not sure if it was my skill or devine intervention, or maybe a bit of both, but amazingly the front tyres had just enough grip to haul the back end up onto solid ground, and off we went no worse for our adventure.
I did have the presence of mind to take a photo of the mini Masada I had built, but sadly I never thought to capture an image of the back wheel balancing on the top of its little tower of bricks.
All's well that ends well, but I am going to be a little more careful in the future.
Just for the record, this was once a proud three story watermill complete with a couple of locums as revealed in this photo borrowed from the hugely informative Norfolk Mills website: 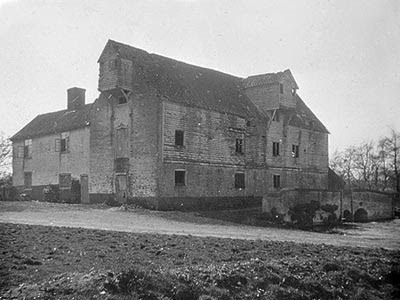 Blickilng Mill in 1910 shortly before the top two layers were removed.
Posted by Andy Tidy at 6:00 am

Email ThisBlogThis!Share to TwitterShare to FacebookShare to Pinterest
Labels: Bure

Oh my goodness, I'm so pleased that you got out unscathed. I do enjoy your waterway explorations (especially around Birmingham) so I hope this hasn't put you off.
Sue, Indigo Dream

Quick thinking Batman!...and I had to be towed out of some damp grass last Sunday when I misjudged reversing round a corner on someone's drive!
Jim

Jim - Its a bit embarrassing isnt it!

Sue
I am glad you like my accounts of my wanderings round the BCN. Fear not, I took a good look along the line of the Bentley Canal last weekend and have some great material for the next BCN series of posts, which should start in mid December.
Andy