Upper Bure or Aylsham Navigation
14th November 2009
I have a particular fondness for the Upper Bure Navigation in North Norfolk, even more so than the North Walsham and Dilham Canal, about which I waxed lyrical back in the spring. 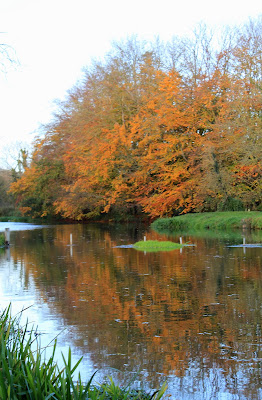 Last leaves of autumn above Horstead Mill
It is fair to say that I spent most of my youth in or on this stretch of the Bure, and particularly the reaches around Coltishall and Horstead. If I wasn't canoeing, rowing or sailing on it, you would probably find me swimming or fishing in it. The place wasn't Nirvana, but for a boy with his head full of Swallows and Amazons it was a pretty good place to be. 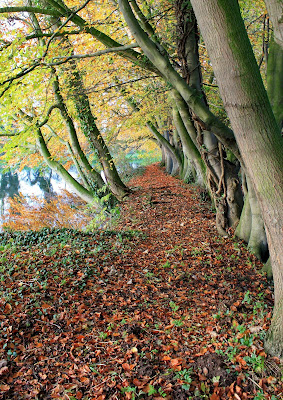 Coltishall riverbank
I didn't really appreciate the significance of the river as a commercial trade route at the time, and I certainly didn't realise just how much of it's 9.5 miles had been adapted in 1779 when it was made navigable through to Aylsham, at a cost of £6,000. On reflection, there is almost as much canal along the line of the river as there is original watercourse. 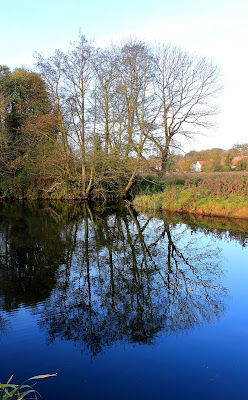 Reflections in Coltishall Lock Pool
In it's heyday, the route between Aylsham and Great Yarmouth supported 26 wherries, which plied a week long route through five locks alongside five watermills - Horstead, Buxton, Oxnead, Burgh and Aylsham. Given the relatively substantial size of the river, and the shallow nature of the locks, the water loss to the navigation would have been a modest price to pay for access to such a convenient method of transport to and from the mills. 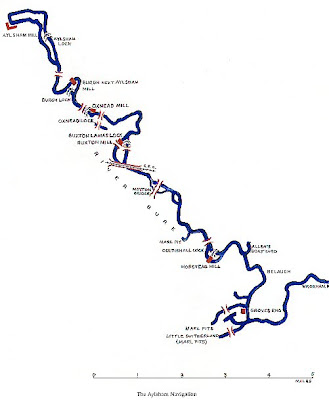 Map of the Aylsham Navigation
The navigation flourished in the 1800's, bringing prosperity to Aylsham and the villages along the route,  that is until the M&GN railway was built up the valley in 1880 resulting in the inevitable demise of the waterway. It struggled on, but was hit by a huge flood in August 1912 which destroyed every lock and bridge from its source near Melton Constable to Coltishall. The waterway never recovered and was left to deteriorate back the drainage channel we see today. 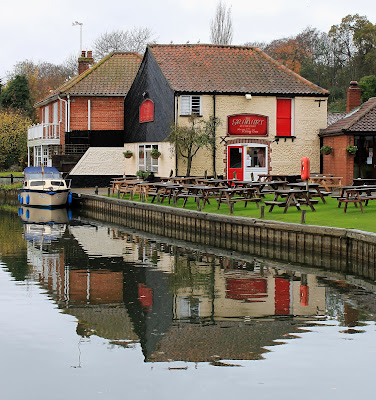 Rising Sun at Coltishall Common
Now my interest in this river runs deep, given my family ties to the Bure Valley and its upper catchment basin. My maternal ancestors operated Aldborough Watermill (on the Scarrow Beck) since the mid 1800's, and my father ran one of the last independent grain mills (not water powered) in Coltishall till the 1970's. I will therefore be posting a whimsical series of blogs about the Bure / Aylsham Navigation over the next couple of weeks, willingly giving in to sentimentatilty and personal recollections of the mills as I remember then in the 1960's, and of course publishing a series of then and now photos to mark the changes.
I hope you find the posts of interest.
Posted by Andy Tidy at 6:00 am

Beautiful. And a fascinating bit of history, too. Bon voyage!

I look forward to it. Will it be as interesting as your exploration of the BCN though?

Minnie
I'm glad you like the photos - If you like the autumnal scenes of Coltishall, I suspect you will like the ones I captured round Burgh as well - they will be published in a few days. Thanks for the feedback - I am always delighted to find comments in my in box, its so satisfying when other people get enjoyment from my ramblings.

Halfie
The interest factor in my Aylsham Navigation series is very much down to individual taste. The Bure was so much a part of my childhood that it is very special to me, but may be of limited interest to others - if anyone will find it of interest it is probably you!
Never fear about the BCN - it continues to captivate me and as it is on my doorstep some more expeditions are planned. If all goes well and the weather cheers up, I may go in search of the Anson Arm and the Bentley Canal this weekend. No promises mind...

Great and interesting piece. I live in the village of Brampton on the Upper Bure close to Oxnead. In Brampton there used to be a staithe and at least one Wherry based here. The Wherry man's cottage still stands. But enough if that - we are approaching the 100th anniversary of the forced closure which will come in 2012. We can't let that pass without some commemorative act. I have written to various local councils and appropriate organisations to try and get something off the ground. Email me if you're interested. stu.wilson100@btinternet.com

Since my earlier post some of us have come together to do something about the anniversary. Please see the website at http://www.eastinvolve.net/aylsham-navigation/

I wonder if we could have permission to use some of your photographs - we have put a link to your site on ours.

Stuart
Feel free to use them anyway you want.
Andy

You and your readers will be sad to hear that the avenue of trees at Oxnead has been felled thereby completely changing the dynamic of the landscape. The felling was completely legal but done without warning or consultation and with no regard to the landscape. I am concerned that this should not happen again. For images of the before and after please see http://aylsham-navigation.norfolkparishes.gov.uk/category/news/
Feel free to contact me through the website if you feel you would like the images shown or want to know more.