It's possible to argue that the first section of the 1795 Wyrley Bank Branch Canal is the most interesting, packing in it's six locks and the junction with the Essington Branch Canal within its first half mile. 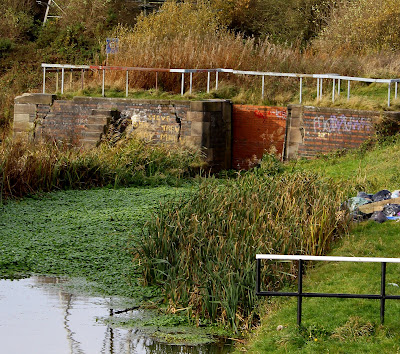 The view from the Wyrley and Essington Canal at Sneyd Junction is a bit misleading, with the entrance to the bricked up bottom lock in full view. This suggests the the other five locks are preserved in a similar manner, and therefore an easy option for restoration. Sadly, this is is not the case and, whilst there is a fair bit to see on the ground, the sad reality is that the only traces remaining in  November 2009 relate to the top and bottom locks. But hey, thats not bad considering the paucity of tangible remains on the lines of some other abandoned canals in the area. At least this route offers some food for the imagination. 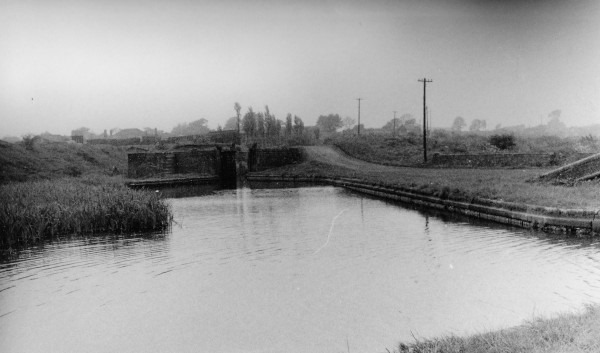 Update Jan 2013 - I found this excellent map recently posted on CWDF by Laurence Hogg which really brings the area to life: 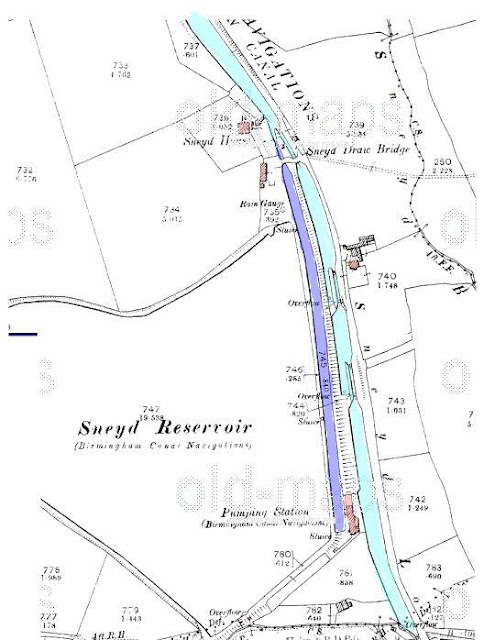 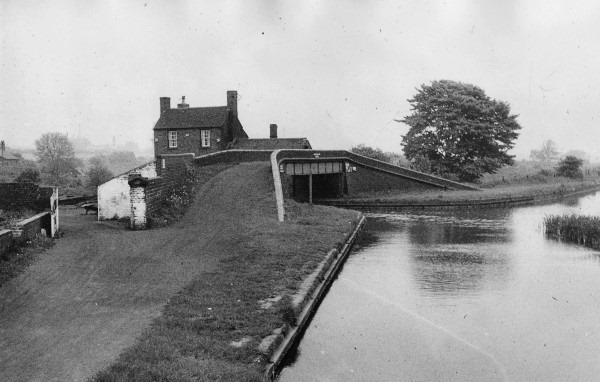 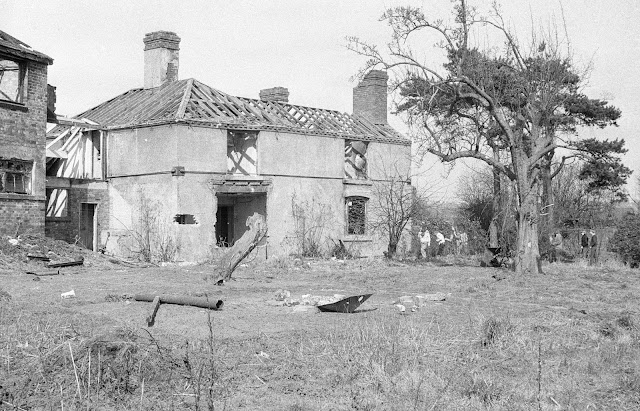 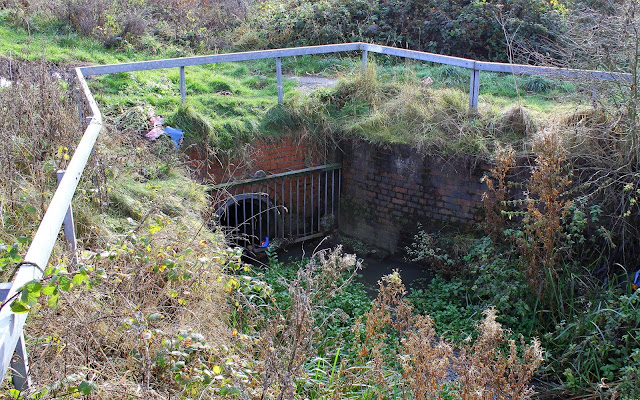 Let's start at the bottom, with it's beguiling first lock. Whilst a bit cracked and crumpled, the bottom wings are intact and, having been culverted and infilled, it is reasonable to assume that the chamber as a whole is in good condition. The top wings are similarly well preserved, which gives a good idea what the rest of the blue bricked flight must have looked like before it was abandoned in the 1950's. 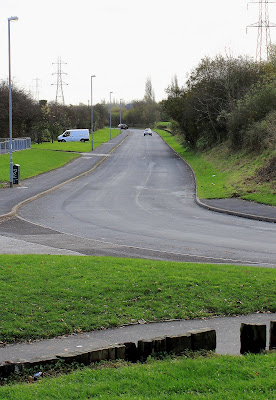 Sadly, beyond the Wolverhampton Road the line of the canal has been completely obliterated by the construction of Vernon Way, taking with it the remains of locks two, three and four. The only link to the canal the road sits on lies in it's name, with Mr Vernon being the mine owner at Essington, and one of the four individuals who promoted the waterway. 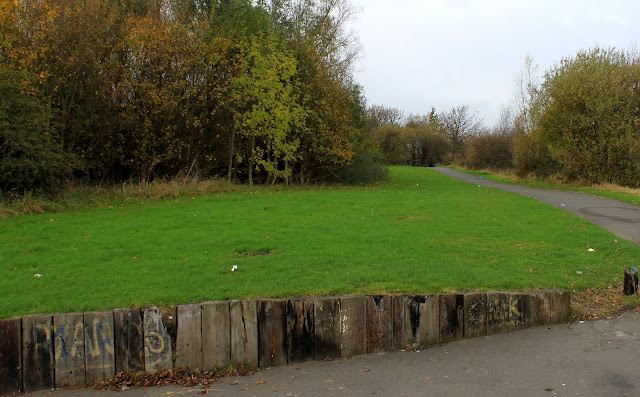 Site of Sneyd Locks No 5 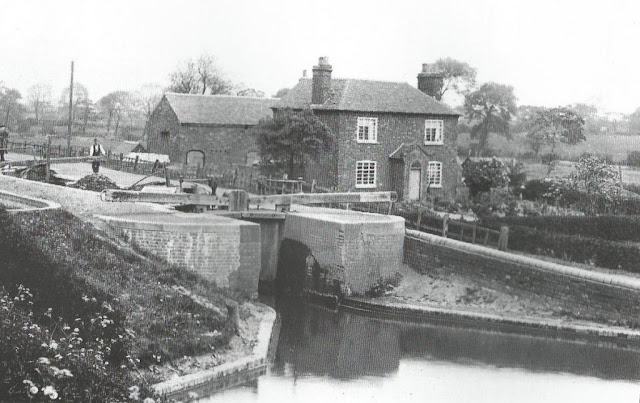 As you reach the top of this steady incline, Vernon Way takes an abrupt left next to the Sneyd Inn, leaving an area of undulating grassland which indicates the line of the last two locks. Whilst there is no concrete (or brick) evidence of Lock 5, it will have been where the rise in levels is retained behind a line of railway sleepers.

A great image of Lock 5 before being filled in can be found here. 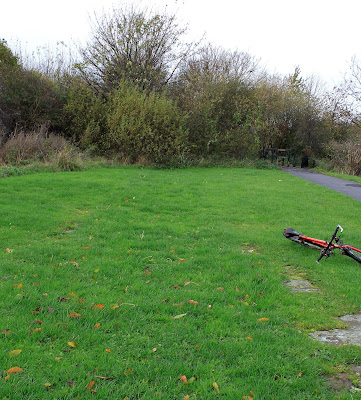 Outline of Sneyd Lock No 6

Lock six offers more scope for investigation, with the upper entrance clearly visible among the trees and, if you look carefilly in the grass, you can still see the stone edgings to the chamber peeping through, right down to the lock tail. It would appear that this lock has been simply infilled and left alone. 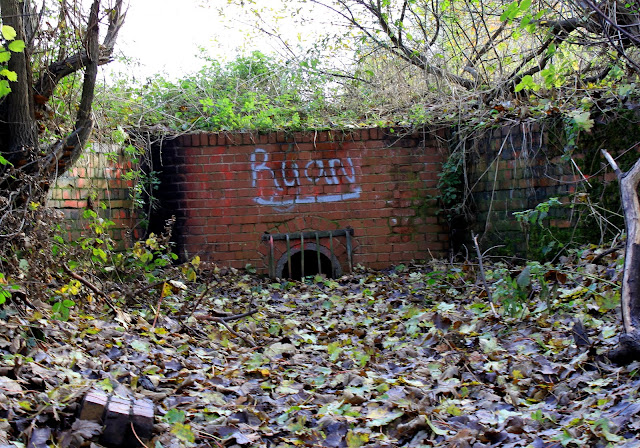 All in all, two out of six isn't bad and well worth a visit.
Posted by Andy Tidy at 6:00 am

Hi, my grandfather worked for British Waterways before,during and after the war. He lived in a house opposite the Sneyd Wharf in Bloxwich, right along side the canal. My mum has fond memories of growing up there. Is there anyway to find pictures of the house of surrounding area for the 30s and 40s? I've found pictures of the bridge but not the house.
Thanks

Hi Michelle,
If your grandfather was Dick Smith, I remember him well, used to buy fishing tickets from him, lots of memories of the canal, traffic etc, recently tried to get planning from Walsall council to rebuild/replace Dicks old house and create dry dock opposite, no good, but then we are dealing with WMBC and in Particulare Ms. Hulse, keep smiling, try google earth (1945) or contact Laurence Hogg, he might be able to help, also BWB archive

Hi Barry
I'm just revisting this page after watching the Captains video/Youtube episode of this section of canal that was released today. (We have conversed briefly together in the past about Richard and you aspiration for the site upon another platform)
Yes Dick (Richard) was Michelle's grandfather. She probably didn't spot your reply to her, but I have in the last couple of years tracked down two (not brilliant) pictures that included 'sections' of Dick's home known as 204 Canalside, which I sent her.
Regards
Tony

My nan used to live in the canal house by the bridge..I had many happy times there ..it was attached to a carpenters workshop..nans house had a pig sty an old Anderson shelter also a cellar..no real toilet just a tin with a toilet seat on it ..my nan used to clean the offices on the other side of the canal..she had to light the fires in the offices before the staff arrived..in the garden was a culvert to let water out of the canal when the levels got to high..also there was a well in the wall that run along side of the garden..happy memories she moved in about 1960..regards peggy cole

Hi Andy
I think there were only five locks at Sneyd, not six. This seems clear from the OS 25" map of 1903 (see https://maps.nls.uk/geo/explore/#zoom=17&lat=52.62041&lon=-2.02547&layers=168&b=1): No. 1 just after Sneyd Junction, No. 2 by Sneyd Lane Bridge, Nos 3 & 4 beside Sneyd Reservoir, and No. 5 beside Sneyd House and Sneyd Draw Bridge.
This is confirmed by LHCRT (see https://lhcrt.org.uk/articles/wyrley.html), in particular in the Bradshaw map of 1830 which states there are five locks at Sneyd, with another five on the Essington branch. This map also suggests the rise at Sneyd is 30.6', for which five locks of about 6' rise would seem reasonable.
Many thanks for the huge amount of valuable history of BCN you have posted. All fascinating reading, as well as the great photos and videos.
Best wishes
John Hammond

I thought there were only 5 locks at Sneyd aswell